Preparing for Tsunamis in California 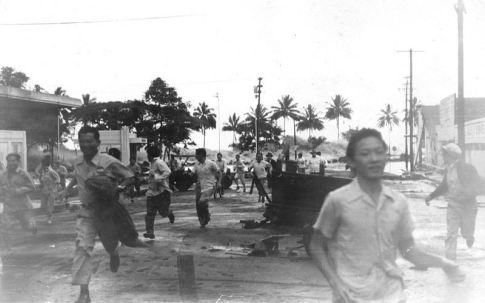 People run from the approaching tsunami. Note the wave just left of the man's head in the right center of the image. Pacific Tsunami Museum
SHARE

The tsunami that struck Crescent City, California, on April 25, 1992, wasn’t a destructive one — the waves were relatively small, and no loss of life or significant damage resulted. But it was still an important tsunami event, in that it illustrated how quickly a wave can arrive at nearby coastal communities and how long the at-risk period can last. The tsunami occurred after a 7.1 earthquake shook the coast of Cape Mendocino on California’s north coast, generating a series of tsunami waves. The first wave reached Crescent City in less than an hour, but the highest waves arrived nearly four hours later, and sea levels remained abnormal for more than eight hours.

Crescent City, located about 285 miles north of San Francisco, has experienced more tsunamis than any other community on the west coast of the mainland U.S. In November 2006, a tsunami triggered by an earthquake in the Kuril Islands struck Crescent City. It was the first tsunami to cause significant property damage in the United States since the 1964 tsunami in Alaska.

Tsunamis can be triggered by local or distant sources. A local-source tsunami occurs when an earthquake near the coast displaces the seafloor; the first waves can reach the coast within minutes after the ground-shaking stops, and there is limited time to issue warnings. Distant-source tsunamis are generated when an earthquake occurs in a distant location in the ocean; these waves typically reach the coastline many hours after the earthquake occurs. “Destructive distant tsunamis are very infrequent, but if they occur they can cause extreme destruction locally and then also across the ocean basin,” said Laura Kong, director of the International Tsunami Information Center in Honolulu. One such destructive event from a distant source was the 2004 Indian Ocean tsunami, which killed an estimated 230,000 people.

The heavily populated coast of California, along with Hawaii and Alaska, faces the greatest risk of tsunami damage in the United States. In 1946, an earthquake in the Aleutian Islands generated a tsunami that struck Hawaii. Wave heights reached an estimated maximum of 55 feet, 36 feet, and 33 feet on the islands of Hawaii, Oahu, and Maui, respectively. Areas up to a half mile inland were inundated, and 159 people were killed. But because tsunamis have caused more loss of life than any other natural disaster there, Hawaii has had comprehensive tsunami hazards maps since the 1960s — unlike the rest of the United States.

Now, boosted by technological advances in computing power, tsunami modeling, GIS, and NOAA’s DART (Deep-ocean Assessment and Reporting of Tsunamis) network, researchers are creating a new set of tsunami inundation maps for coastal California. The maps are based on a computational code that calculates how a tsunami evolves over variable ocean depth and topography (surface shapes and features), and then computes the area that will likely be inundated by the tsunami.

As part of the mapping project, the Tsunami Research Center at the University of Southern California is also evaluating several potential local and distant tsunami sources to determine which ones are most likely to cause destructive tsunamis in California.

The California inundation mapping effort is now in its final phase and will be completed by June 2009. The California Governor’s Office of Emergency Services will then conduct workshops with coastal cities to discuss how to put tsunami mitigation strategies in place.

According to researchers who interviewed survivors of the Indian Ocean tsunami, the staggering loss of life occurred partly because coastal communities were not aware of their vulnerability to tsunamis. The new maps will help agencies in coastal California communities develop evacuation routes and emergency response plans that could prevent another catastrophe like the one in Indonesia.

People run from the approaching tsunami. Note the wave just left of the man’s head in the right center of the image. 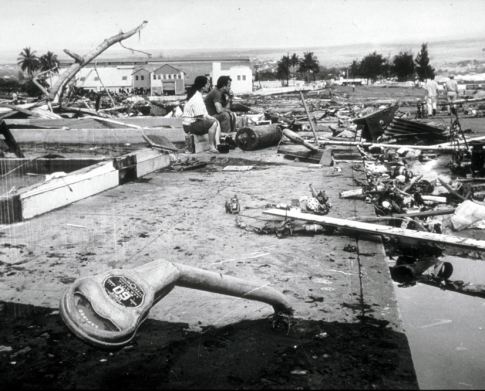 In Hilo, Hawaii, parking meters were bent by the force of debris-filled waves when a tsunami struck the town for the second time in 15 years. The tsunami was generated by an earthquake that struck off the coast of Chile on May 22, 1960 — more than 6,000 miles from Hilo. 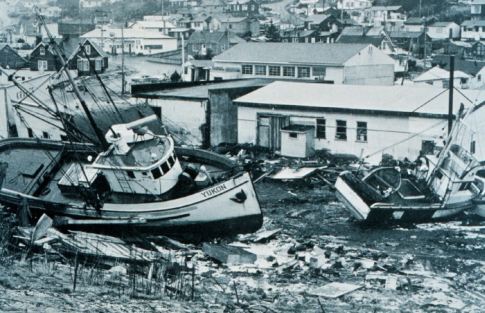 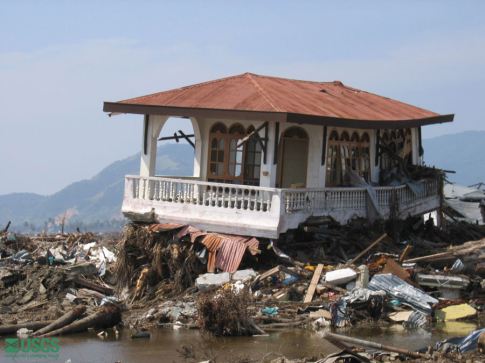 A section of a home is left standing in Banda Aceh, Indonesia, after the 2004 Indian Ocean tsunami.

In Banda Aceh, Indonesia, debris and standing water are left in the aftermath of the 2004 Indian Ocean tsunami.

This map shows the epicenter location of the earthquake that caused the tsunami in Crescent City, California, in 2006. The image illustrates how a distant source tsunami can impact a coastline thousands of miles away.

In 2007 the National Oceanic and Atmospheric Administration (NOAA) installed four new Deep-ocean Assessment and Reporting of Tsunami (DART) buoy stations in the northwest Pacific Ocean, east of Japan and Russia. The DART network, which includes stations strategically placed in the Pacific and Atlantic Oceans, the Caribbean Sea, and the Gulf of Mexico, reports sea level information measurements back to Tsunami Warning Centers, where the information is processed to produce an estimate of the tsunami source and a forecast to be used to issue watches, warnings, or evacuation orders.