A scientific approach to limiting the wildlife population explosion 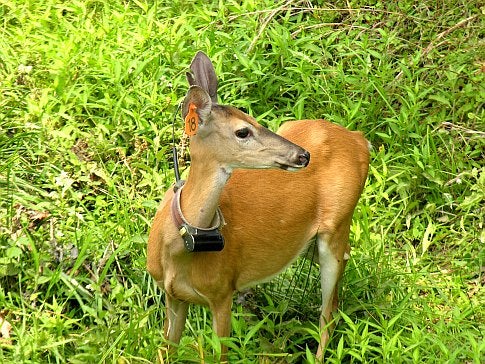 In wildlife biology, concerns about animal populations often stem from unnatural declines; in a few cases, however, that concern can be a result of too many animals, not too few, as some once-threatened species have returned with a vengeance.

Now a group of researchers is fighting back with a familiar (to humans, at least) tactic: birth control.

Deer and Canada geese, in particular, have overtaken parts of North America in such magnitude that they’re wreaking havoc on the environment, on human sanity and on public safety.

Just ask pilot Chesley “Sully” Sullenberger, whose U.S. Airways flight 1549 landed in the Hudson River after a flock of Canada geese took out the airplane’s engines.

“A lot of the problems are occurring in urban areas, but people don’t necessarily want the animals shot, so we’re trying to be responsive to those kinds of issues,” said Dr. Kathleen Fagerstone, research program manager at the National Wildlife Research Center in Fort Collins, Colo., where the contraception programs were developed.

A once-a-day birth control pill is now available for geese and pigeons, and wildlife researchers just submitted an application with the U.S. Environmental Protection Agency to market a one-time injectable immunocontraceptive for white-tailed deer.

The efforts complete a circle of sorts. Humans hunted geese and deer practically to extinction by the 1930s, but later helped restore native populations. Without natural predators and with an abundance of food and shelter, the animals have flourished. The continental United States is home to more than 17 million white-tailed deer, according to the Wildlife Research Center. By 2002, North America was home to 3.5 million resident Canada geese.

“Canada geese hit a low point in the ’70s, partly because of DDT, partly because of hunting. That’s when people started moving geese around and they would bring them in,” Fagerstone said. “They didn’t know they were supposed to migrate, so they didn’t.”

Like the mid-20th-century gosling boom, the goose contraceptive’s discovery was somewhat of an accident. About 14 years ago, Erick Wolf was with a pharmaceutical company that worked with Merck to produce nicarbazin, a drug fed to chickens since the 1950s to prevent coccidiosis, a potentially fatal sickness.

The drug is only fed to broiler chickens that will be slaughtered, but on occasion, a breeding hen would snag one. Then her eggs wouldn’t hatch. The drug changes an egg yolk’s pH and allows it to mix with the albumin (the white part), which prevents an embryo from forming.

“For 50 years, the Merck guy went around and said, ‘This is a great drug to protect your chickens from coccidiosis, but whatever you do, don’t feed it to your breeders,'” Wolf said.

Eventually, a colleague convinced a skeptical Wolf to consider using the drug to intentionally prevent eggs from hatching. Wolf approached scientists at the Wildlife Research Center, who were already hoping to develop an oral contraceptive that could be fed to slippery species like feral hogs and birds, which are hard to capture and inject. 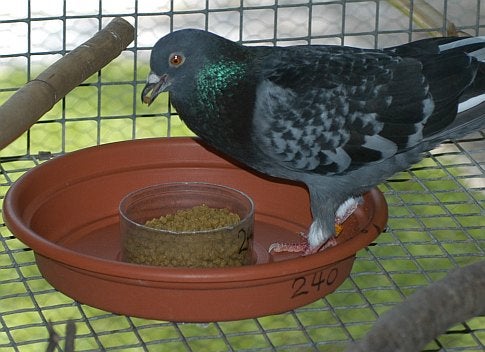 Scientists at the wildlife center and Wolf’s company, Innolytics, eventually developed a wheat-based, chewy bait for Canada geese, and the animals loved it. Gregarious geese are easy to train, so they quickly grew accustomed to workers feeding them daily birth control pills, Fagerstone said.

“They’ll show up, actually, when the truck arrives, or when the feeder goes off. Then they’re sitting there waiting for their morning feed, and then there’s nothing left for anyone else,” she said. That’s good news for anyone worried about another creature picking up the treats by mistake.

Dale Humburg, chief biologist for the waterfowl and hunters’ advocacy group Ducks Unlimited, said while contraception is humane and can be effective, it’s not the only answer. He said longer hunting seasons, increased bag limits, and even relocation efforts should come into play.

“It doesn’t help to employ methods of direct control if the attractant, the nest sites, or people feeding them or whatever, is in place,” he said. “[Contraception] won’t solve the problem unless the full range of tools are used.” 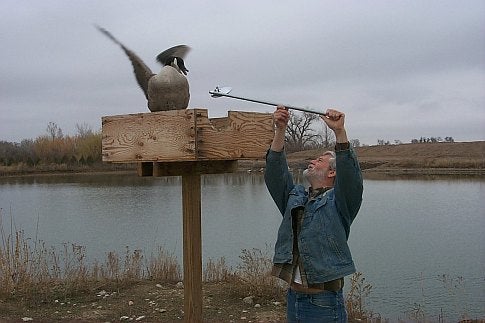 A Biologist Checks a Goose Nest for Eggs

Though hunters do help, humans have tried for more than three decades to control wild populations of ungulates like horses, deer, and elk, without introducing predators that would also eat cows and sheep.

Efforts to create a fertility control drug stem from the animals’ fecundity — in the wild, pregnancy rates reach 85 to 90 percent of all female elk, said Jenny Powers, a wildlife veterinarian for the National Park Service.

But when scientists at the wildlife center tested it in white-tailed deer, they found that while it inhibits fertilization, it doesn’t shut down reproductive hormones, so the deer were in the mood far longer than they should have been.

In 1996, Dr. Lowell Miller looked to the brain, and developed a vaccine for a hormone that starts the endocrine cascade leading to the reproductive cycle. He attached the hormone to a mollusk protein, fooling the immune system into attacking it. The successful result was that the deer’s reproductive cycle simply didn’t start. So far, the treatment hasn’t been shown to have any adverse effects, Fagerstone said. And it keeps the does from attracting any suitors.

“The males just ignore them. It’s like another young male or a young female that’s not reproductive yet,” she said.

The drug, called GonaCon, is especially promising because it doesn’t require a booster shot, unlike most other vaccines, and one study showed it prevented pregnancy for up to five years.

It isn’t commercially available yet, but scientists hope it could help in suburban areas where deer and elk cannot be hunted, as well as in national parks. In January 2008, Powers and other scientists injected 60 elk with GonaCon in Rocky Mountain National Park, 65 miles north of Denver, while also testing several animals for chronic wasting disease. Though the study’s results aren’t yet ready for publication, it seems to be working well one year later, she said.

Humburg said any attempts to control wildlife populations have trade-offs for the animals and for people.

“There’s a large number of species that have been in relatively low abundance just in the past few decades,” he said. “I can remember the first deer I saw; it was really quite a formative event for me. I can remember when Canada geese were not common at all. So these are conservation successes. But with conservation success, and in the context of growing human populations, there are tradeoffs, and there are challenges that we have to face.”