Why the mystery persists, despite recent scientific papers 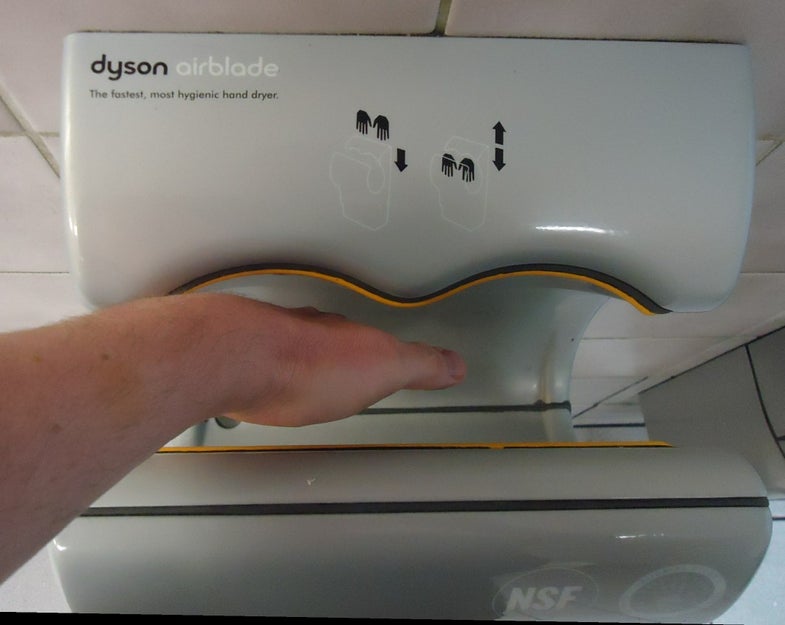 Those jet hand dryers might dry your hands super fast and make you feel like you’re living in the future, but they might be making others around you sick. A study published in January in the Journal of Applied Microbiology compared the dispersal of viruses when people dry their hands with paper towels, warm air dryers, and jet dryers, and found that jet air dryers were by far the worst offenders, spraying 1,300 times more viral plaques (clumps of viruses) than paper towels, and sending some of them nearly 10 feet from the dryer itself.

The study was reported on by various outlets this week, such as the Independent and the Guardian. This is the most recent of a number of studies on the issue, and jet dryer manufacturers can give plenty of reasons to take its findings with a grain of salt.

In the study, the researchers asked participants to dip their gloved hands into a solution of a harmless virus called MS2. After giving their hands a quick shake, the participants tried one of the three drying methods. The researchers then collected samples from the air and from surfaces (petri dishes placed before the experiment) at different distances from where the drying procedure occurred. The jet air dryer was far and away the worst offender, spreading more viruses farther.

The researchers weren’t surprised by their findings: “These differences in results between the three hand-drying devices can be largely explained by their mode of drying the hands,” they write. That would make a big difference in places where it’s essential to avoid disease transmission, like in hospitals.

It’s important to note that the study didn’t test how well the different drying methods distribute bacteria, which are much larger and can also cause disease.

Previous studies, such as one conducted by the same researchers in 2014, have stirred controversy about just how clean jet dryers are. After the 2014 study was published, Dyson spokespeople noted that the participants’ hands were more covered with viruses than they would be in a real-world scenario, and claim that paper towels are covered with germs from previous users. In 2008, the Royal Society for Public Health gave Dyson Airblade, one of the most common jet dryers, an accreditation for hygiene. Another Dyson spokesperson accused scientists of “scaremongering” and have previously complained that the research is being funded by the paper towel industry.

Don’t expect full clarity on this issue anytime soon—the fight is a dirty one for whose product is the most hygienic. Just wash your hands well and, no matter which drying technique you use, look on the bright side: a few more germs could boost your immune system.