Sadly no, your smartphone can’t do it all 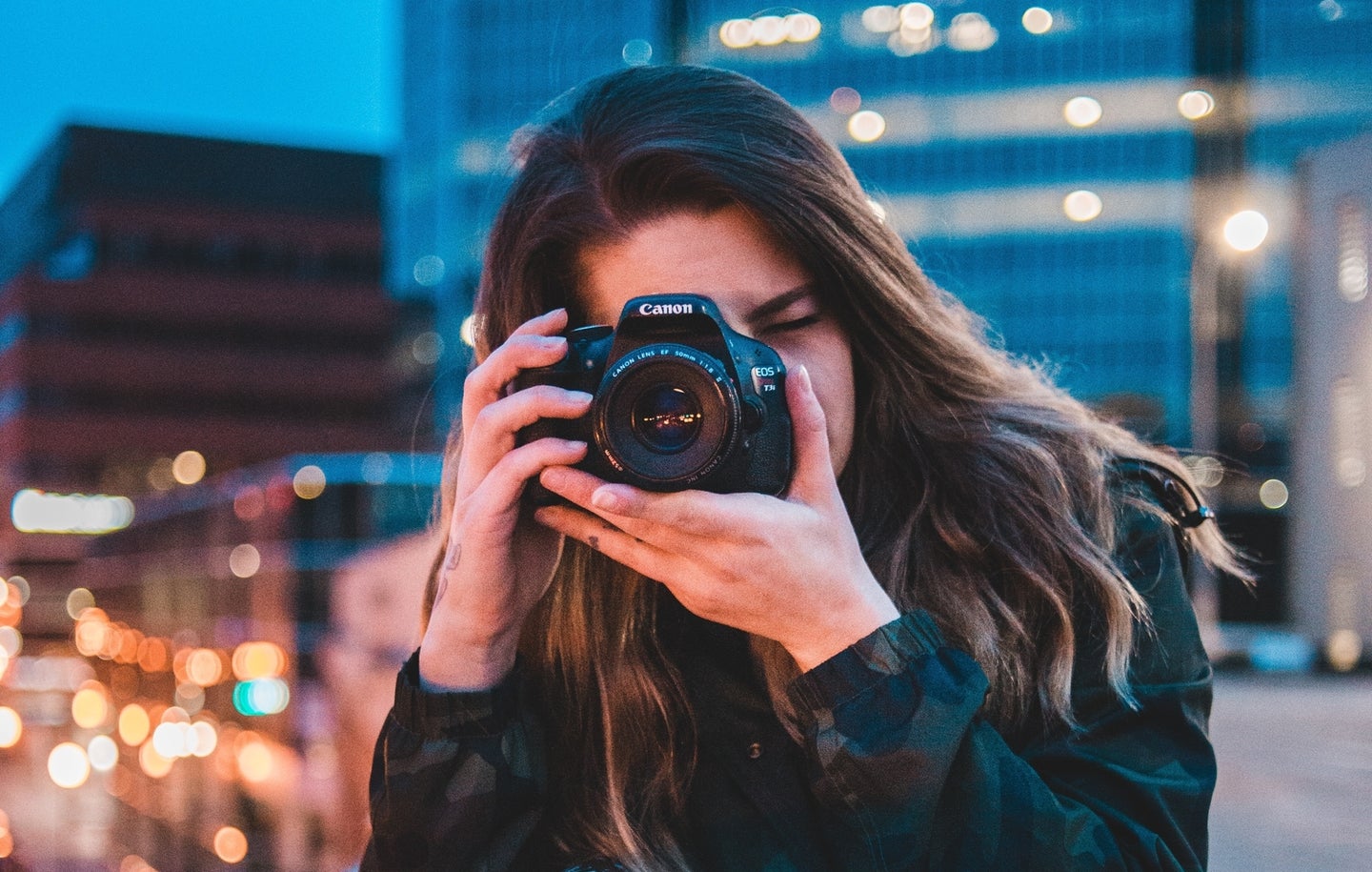 As smartphone cameras get more capable, sales of dedicated cameras like DSLRs and mirrorless cameras are plummeting. For most people it just doesn’t make sense to own one, but for starting photo enthusiasts, it still might.

If you were planning on becoming a photographer, the decision would be easy. However, when it comes to investing your hard earned money in a hobby you’re only starting out with, you’ll probably spend a lot of time asking yourself if it’s a good idea to get a dedicated camera. And if you finally decide to go for it then there’s the whole which-one-to-buy conundrum—and things get even more complicated.

How to know if you need a dedicated camera

Dedicated cameras aren’t cheap. Even an entry-level point-and-shoot will set you back $150. The top-end mirrorless and DSLR cameras cost thousands of dollars, and that’s before you even get a lens, which can go for anywhere between $120 for a very simple 50mm prime, to $20,000 for the kind of kit you see sports photographers use at NFL games.

If you’re thinking about buying a camera, you need to make sure you need it and will actually use it before forking over the cash. Otherwise, you’ll just be buying an expensive drawer ornament.

The lens aperture on your phone fixed, so even though you can play with manual controls such as ISO and shutter speed, you will only benefit from a dedicated camera if you’ve already hit the limits of these settings. You also have to know what those terms mean and how they affect your photos.

If you don’t know what I’m talking about, maybe you’re not at that stage and a camera will only end up being an awkward, bulky thing to carry around. On the other hand, if you’ve already dug into the little control you have over exposure on your smartphone, then a dedicated camera might be just what you need.

One area where smartphones just can’t compete with dedicated cameras is zoom.This is because your smartphone camera is not actually doing any zooming, but only cropping your photo so it looks like you’ve zoomed in. The physics of optics is simple: Generally speaking, to get more zoom, the longer focal length lenses have to be longer. A 200mm telephoto lens with around 4x zoom isn’t exactly 20cm (about 8”) long, but it’s in the ballpark. As you might imagine, it’s impossible to cram that sort of thing into smartphones, which actually aim for the exact opposite—to become thinner and lighter.

If you like to shoot photos of your kids playing field sports or the wild birds in your backyard, then you’ve almost certainly discovered that the digital zoom on your smartphone gets murky and blurry. A dedicated camera will definitely help you get those shots.

You want to put the effort into taking better pictures

Unless I dig deep into an image I see online, I normally can’t tell whether it was shot with a phone or a professional DSLR. Smartphones are almost as good as dedicated cameras in most situations, but those “most”s and “normally”s still matter.

Smartphone cameras perform really well in broad daylight or when there’s loads of natural light streaming in through a window, when nothing is moving too quickly, and you’re not going for a particular look or effect. Take family photos on vacation and your smartphone will do a perfect job. Try to take photos of the stars at night, or just low-light shots in the woods at sunset, and dedicated cameras come into their own.

However, cameras only work in those situations if you are prepared to put the effort into setting them up correctly. If you leave it in automatic mode, the photos will be only slightly better than your smartphone’s, hence, pretty useless.

If you really want to take great photos at family events, parties, and anything else, whatever the lighting situation, then it’s a safer bet to ditch your smartphone and opt for a dedicated camera instead—as long as you’re prepared to learn how to use it.

How to buy a dedicated camera

If you made it this far it means I haven’t warned you off and you’re now convinced you need or want a dedicated camera. Now, comes the tricky part: You have to choose one. Yes, that does sound a bit scary, but we’re here to help and tell you about some of the big things you need to consider.

Since DSLRs and mirrorless cameras will require you to invest in lenses (again, not cheap) consider what you already have access to to decide on a brand. If you happen to know someone who has a decent collection of Canon or Nikon DSLR lenses you can borrow, or if you got a tip on where to go for good second-hand lenses from a certain brand, go with a DSLR from the same manufacturer. If you want a more modern design, go with a mirrorless camera from Sony, Olympus, or Fujifilm. Whichever platform and brand you commit to, know these two factors will be crucial in any future camera choices. I started shooting with a Canon DSLR and have been doing so for almost a decade now. Changing systems is just too costly for, at best, minor benefits.

Point-and-shoots, with their single built-in lens, are simpler than DSLRs and mirrorless cameras. They have two big advantages: they tend to be small and easy to pocket, and you get a lot more zoom for a lot less money. You need to spend thousands of dollars to get the lens required to have 10x zoom with a DSLR, while you can get the same feature built into a $200 point-and-shoot. In terms of image quality, an entry-level point-and-shoot sits pretty much in the middle of smartphones and interchangeable lens cameras. Definitely better than your phone, but not quite as good as a DSLR.

If you want to go deep down the photography rabbit hole, go with either a DSLR or a mirrorless camera. On the other hand, if you just want something that will take better pictures or has lots of zoom, go with a point-and-shoot.

In case I haven’t stressed this enough, I’ll say it again—cameras aren’t cheap. So, before you think of heading down to your favorite photo retailer (which is what I’d generally recommend over buying cameras and accessories online), you should set a budget. It’s very easy to up-sell yourself into thinking you need to spend more money on a camera after reading a few reviews online, and the total price you’ll pay for the camera, lenses, and probably a bag to carry them around or store them, can get out of hand pretty easily.

For a point-and-shoot camera, the budget just has to cover the cost of the camera—around $200 for a good entry level model, and about $600 if you want something great.

For DSLRs and mirrorless cameras, however, there are a few extras you need to factor in. The kit lens that will come with your camera is a great starter lens, but most likely won’t have much zoom or a very wide aperture. It’s handy for family photos, travel snaps, landscapes, and general day-to-day stuff, but if you want to shoot sports and wildlife, or portraits and low-light images, you need to think about buying another lens that will give you better results.

Similarly, a tripod is really handy for landscapes—but a decent one will set you back another $100. If you have $600 budget, instead of spending it all on a camera, you’re almost certainly better buying a slightly less fancy $450 camera, and use the rest to buy gear you’ll need to get the photos you want to take, like a tripod or portrait lens.

Research your options and buy your camera

I’m going to let you in on a little secret that’ll make your decision easier: nowadays every camera from a major manufacturer is pretty great. The specs are largely marketing material and unless you really know what you’re doing, the small differences between Canon and Nikon’s entry-level DSLRs (or Sony and Olympus’s mirrorless models) aren’t going to have any real world impact on the quality of your images. Every camera has more than enough megapixels, a big-enough ISO range, and a suitably wide dynamic range to get you started.

The best thing to do is find the cameras from reputable manufacturers (Canon, Nikon, Sony, Olympus, Fujifilm, and Panasonic) that fit your budget, read a few reviews, and compare between them to find the one that best suits your needs. It is highly unlikely you’ll end up accidentally buying a dud.

Also, if you want to make your budget stretch a little further, there’s a lot to be said for buying a second hand model from either your local camera store or good online shop like B&H. A lot of the “improvements” over the last few years have been things like touchscreens and Wi-Fi, rather than pure image quality. A higher-end camera from three years ago will take photos that are just as good, if not better, than a just released entry-level model.

Learn to (really) use it

Whatever camera you use, it’s only as good as you—DSLRs don’t magically take great pictures. To get the most from your new camera, you need to learn how to use it. If you’re lucky, the shop might offer a short introductory class with your purchase, but otherwise you’re on your own.

If you don’t already know the basics of photography, start by reading a beginners book or guide. I love Understanding Exposure by Bryan Peterson—it’s the book that got me started. After that, read through your camera’s manual to find out how all the different modes and controls work. You want to be able to change the different settings as if it were a second nature to you.

And finally, the most important step of all: get your new camera, go out and take some photos.