The 30-ton vessel, Faith, is armored to keep out unwanted guests. 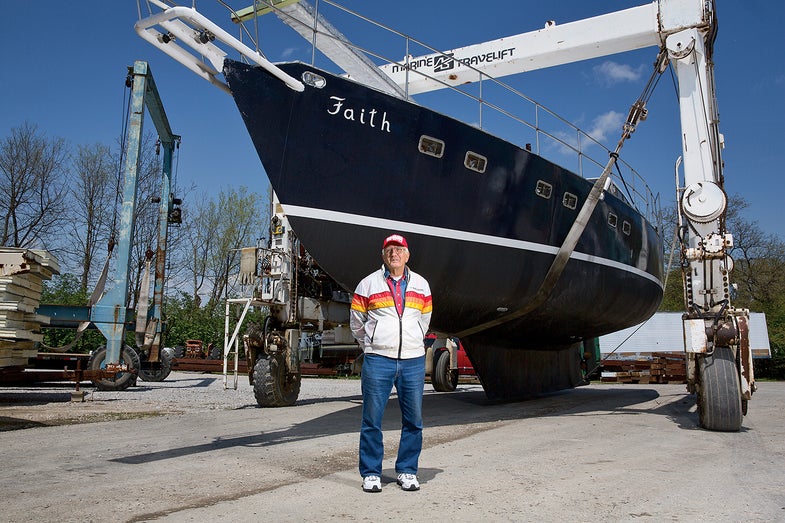 Tom West has tackled some impressive builds over the years, including telescopes, a sawmill, and his house in Poland, Indiana. But West, a retired teacher, recently completed his swan song: a 30-ton, 56-foot-long sailboat named Faith. The one-mast vessel is longer than a double-decker bus, outfitted with wind turbines, and armored with a hull and cabin doors made from steel to thwart pirates on global voyages. “Everything you see, we did,” West says, standing next to the craft in his yard. “This all started out in pieces—the whole damned boat.”

West had little sailing experience, let alone boat-building know-how, before deciding to construct a huge ship in a landlocked farm town. He’d simply seen a lot of sailboats on a Hawaiian vacation and wanted to make one big enough to live on. West eventually settled on plans for a Bruce Roberts 532 vessel—a design sometimes used for charter boats—and refined them into his dream.

Most recreational cruisers are fiberglass boats measuring 26 to 40 feet long. Faith dwarfs these. It has two bathrooms, a full kitchen, lounging and dining areas, and room to sleep 12 people. A door with a ¼-inch-thick steel core protects the master cabin, which has the only access to the rudder controls, should pirates attempt a raid.

Building Faith took West, his wife, Martha, her brother Lloyd, and Tom’s late brother, Frank, five years—three more than they’d anticipated. They started work in West’s front-yard tennis court (another one of his custom creations). Using a plasma torch, the team welded steel beams together over concrete blocks to support the skeleton of the upside-down hull. Next they built two gantries to flip the hull upright. Anything that West could make, he did—including stainless-steel handrails, rope tie-offs, and the 65-foot-tall mast. 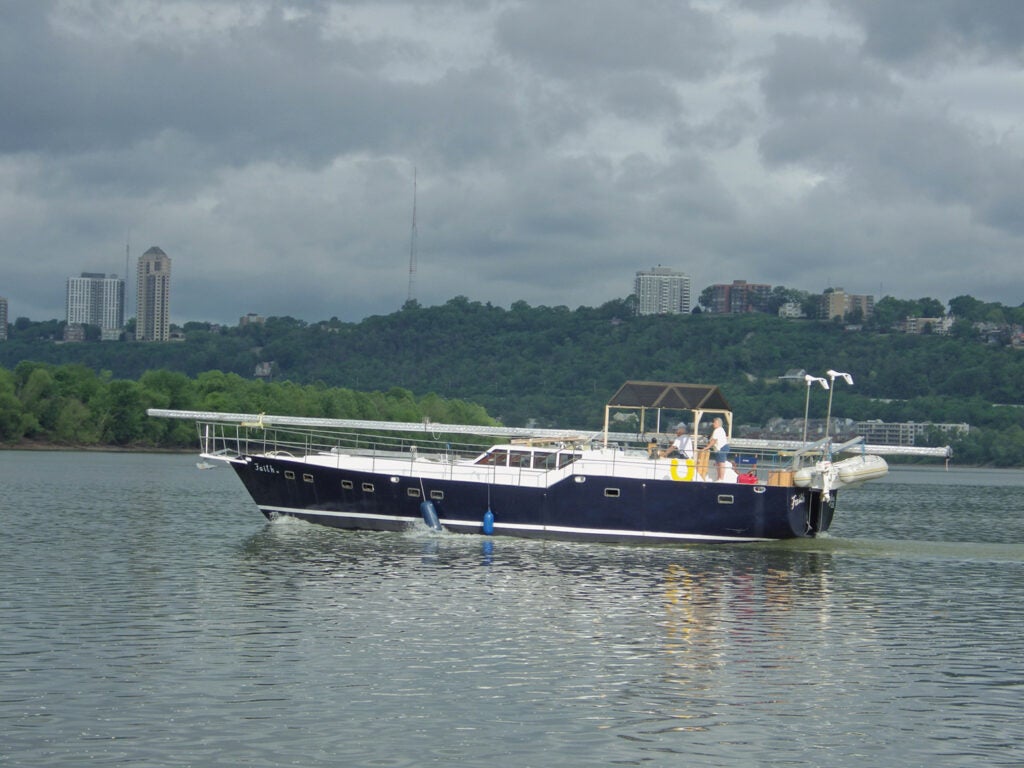 The Wests stowed Faith‘s 65-foot-tall mast while navigating waterways east of the Mississippi. Once they reached a bay with access to the Gulf of Mexico, they began installing the mast.

Getting Faith into water proved nearly as challenging as building the boat. The Ohio River, located about 150 miles away, was the nearest suitable connection to waterways leading to the Gulf of Mexico. It took the Wests a month to find a towing company able to execute a hair-raising one-day slog along highways and back roads. “The trailer was about an inch off the ground,” West says. “It rubbed the ground every so often.”

West says he named the craft Faith because he had to believe that one day he’d actually complete it (and it wouldn’t sink). The moment of truth arrived in late April, at a Cincinnati marina. “There was a whole bunch of guys pushing on the boat,” West says. “But the current was so fast that the ramp scratched the bottom.” Then, after West started the engine, it blew a head gasket. Leaky pipes also plagued the maiden voyage, but the Wests successfully repaired their ship and headed downriver toward the ocean. They hope to pilot Faith to several continents, but their exact route is open to the winds of chance and curiosity. “This has added years to my life,” West says. “I think that’s the secret to life: get out and do something.”

Crafting part of a 56-foot-long yacht is one thing. Learning to build Faith and install, maintain, and repair all of its parts is another. Here are just a few of the nautical systems West mastered during his five years of toil.

Power
A 100hp diesel motor and 500 gallons of diesel fuel give Faith 1,000 miles of range without wind.

Navigation (A)
A computer autopilot, radar system, sonar scanner, GPS unit, and a gyroscopic compass all work together to get Faith to its destination—with or without a captain.

Safety
To guard against pirates, West made the core of the master cabin’s door from steel and incorporated a thick metal lock bar. The only access to the rudder controls is through the master cabin, so if there’s a raid, the Wests can hunker down inside and disable the ship’s steering. (A gun cabinet in the master cabin holds last-resort countermeasures.)

Electricity (B)
Two wind turbines on the back of the boat provide power for lights, electronics, and other systems. Faith also has a 10kW diesel generator, which fulfills most of its electrical needs.

Interior (C)
West harvested walnut trees from 50 acres of forest that he owns, cut the timber in his homemade sawmill, and used it to build the boat’s cabinets, control panel, and tables.

Water
Faith‘s water-treatment system converts seven to nine gallons of seawater into tap water every hour, using carbon filters and a bacteria-killing ultraviolet light to get the job done.