How To Turn Garden Beets Into A Drum Machine

Become a "beet-boxing" DJ in a weekend. 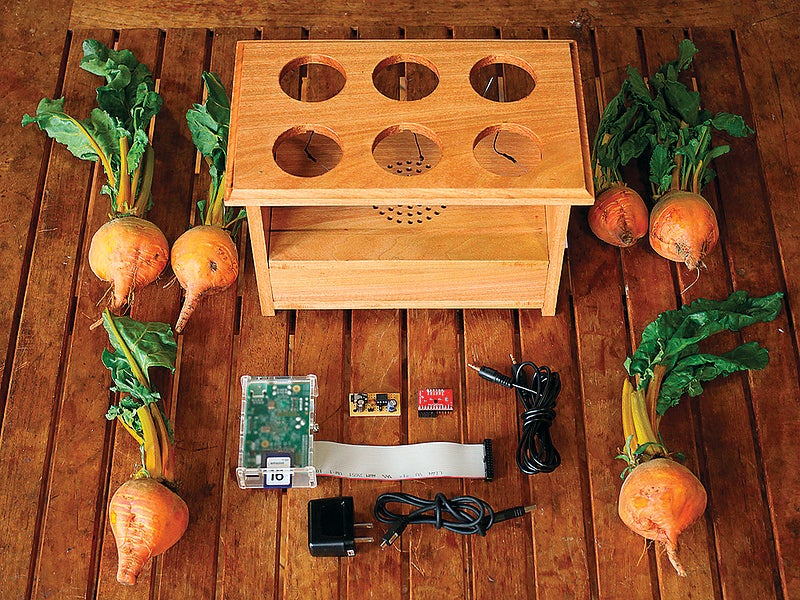 People conduct electric charges, and so do vegetables. This simple fact spurred designer Scott Garner to build the Beet Box: a machine that plays drum-kit sounds at the tap of a beet. The beets conduct body capacitance, or the electrical energy stored inside humans, to a sensor plugged into a Raspberry Pi mini-computer (“Pi” for short). Each touch triggers software to produce one of six percussion sounds. Garner hid the electronics inside a wooden enclosure with a lid so that striking the beets emits clashes and snares as if by magic.

2. Computer. Configure a Pi to use I2C communication (this will allow it to communicate with the capacitive sensor). Load touch-sensing software onto the Pi so it can interpret the signals.

3. Beets. Solder six wires to individual electrode ports on an MPR121 capacitive touch sensor breakout board. Stick each wire into a different beet.

4. Wiring. Use a wire to connect the SDA port of the breakout board to pin 3 on the computer, and the SCL port to pin 5. Link the board and the Pi’s grounds. Connect the board’s 3.3V line to pin 1 and its IRQ line to pin 7 of the Pi.

5. Speakers. Hook up small speakers to Pi’s audio port. Fit the board, Pi, and speakers inside the enclosure. Run a power cord to the Pi, drop the beets into their holes, then drop some beats.