Mercury used to be lots of funâ€”before we knew that it could kill you. Hereâ€™s how several pounds of it made the first electric motor spin 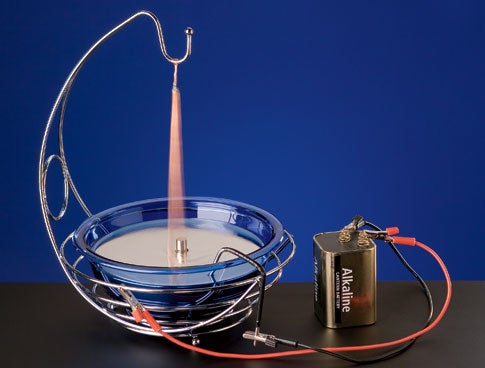 In this simple electric motor, current running through the wire into 60 pounds of mercury causes the wire to revolve around a magnet.

There are great things to come in the future, jet cars and all that. But the past held a few wonders too-for example, jars of mercury available at the corner apothecary. Just 50 years ago, people treated the shiny
liquid metal like a toy. Sadly, I´ll never experience the strange sensation of sticking my entire arm into a barrel of mercury, as kids once did during factory tours. Today mercury is considered a horrific poison, so bad that schools are evacuated for
a broken thermometer.

Of course, mercury didn´t become more poisonous; we just learned more about it, including the fact that breathing its vapors can lead to brain damage. The Mad Hatter of Alice in Wonderland fame was mad (crazy) because of the mercury compounds used in hatmaking.

But mercury can do more than amuse you and destroy your brain. As one of the few liquid metals, it´s also the best liquid electrical conductor. So with big ventilation fans, latex gloves, and catch basins under everything, I used a 60-pound pool of it to re-create the first electric motor, invented in 1821 by Michael
Faraday in his basement lab in London.

The motor works by running an electric current through a wire that hangs next to a magnet. This setup generates an electromagnetic force that drives the wire in circles. But to get current through the wire, you need a connection at both ends, so Faraday used mercury, which allows the loose end to move freely. (Back to the present: None of the supplies I used can ever enter a kitchen again.)

Although Faraday´s motor is essentially useless, it´s the simplest possible design for a device that turns electricity into rotary motion, a wonderful proof-of- concept both that electric motors are possible and that mercury is still neat stuff.

Namesake: The Roman god
Mercury, known for being fast and agile