A quick blood type test, an app that syncs music playback on your phone and more 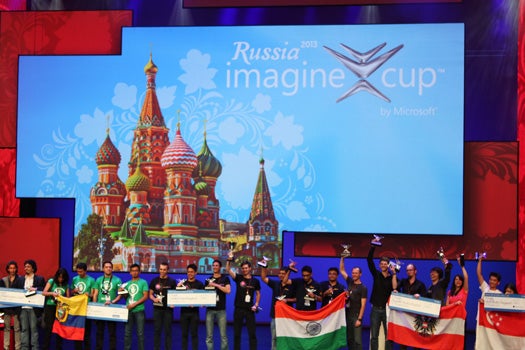 At the afterparty for Microsoft’s Imagine Cup, a worldwide student technology competition, some of the smartest students in the world are singing “Like a Virgin.” One of them begs me to get him a beer; the line is impossibly long and I’ve finally reached the front. But really, you can’t blame them for wanting to unwind. It’s been a long week in St. Petersburg, Russia, where the students have largely neglected the sights in favor of long nights of coding and honing their business pitches.

It all culminated on Thursday, in the Alexandrinsky Theatre, at the lengthy and lavish awards ceremony hosted by the Doctor himself—Matt Smith of Doctor Who fame, so chosen because “we wanted someone who would embody the Imagine Cup qualities of creativity, ingenuity and a lot of last minute running about,” says John Scott Tynes, the Imagine Cup competition manager. Several teams walked away with cash prizes ranging from $3,000 to $50,000 to grow their businesses and improve their inventions. Winniers included a quick blood type test, an app that syncs music playback on your phone, and a social network for nonprofits and volunteers.

“We’re giving people a platform to showcase their idea and it seems to me that [considering] the quality of some of the ideas, if you weren’t to invest a little more in the research and the development, it would be a real shame,” Smith says.

Though there are approximately one million smaller awards and challenges that students compete for at the Imagine Cup, the main three categories are Games, World Citizenship and Innovation, the only real difference between the latter two being that World Citizenship projects are supposed to be altruistic and the Innovation ones don’t have to be (though they still sometimes are). The winner of the World Citizenship competition devised a tool that lets you quickly and easily test for blood types. The winning team in the Innovation competition created an app called soundSYNK that lets you sync up smartphones to play music simultaneously.

The focus of the Imagine Cup has shifted somewhat from past years when it really emphasized using technology to solve the world’s problems. There’s plenty of that remaining, but it seems that the competition is embracing inventiveness in all its forms, including projects that are really just for fun. There’s space for a game called “Piggy Spanker,” which is pretty much what it sounds like, to be in the same room as an app that diagnoses malaria.

Students are encouraged to treat their projects like startups–to come up with business plans and think not only about what their projects could theoretically achieve, but how to actually make them a reality. As Microsoft Corporate Vice President Steve Guggenheimer reminded the attendees at the awards ceremony, “Microsoft is a student-run startup…my hope for all of you is that you end up in the same place someday.” That never seemed to be far from the students’ minds. They are consummate salespeople, walking the floors during showcases, pulling you aside and asking “Have you heard about our project?”

I saw some amazing ideas at these showcases, both from teams that won and teams that didn’t, from all over the world. Team MaskedNinjas from Egypt created an app that turns a newspaper into a Harry Potter-esque experience, scanning text and bringing up relevant videos to enhance your reading. It isn’t magic though, just an algorithm. 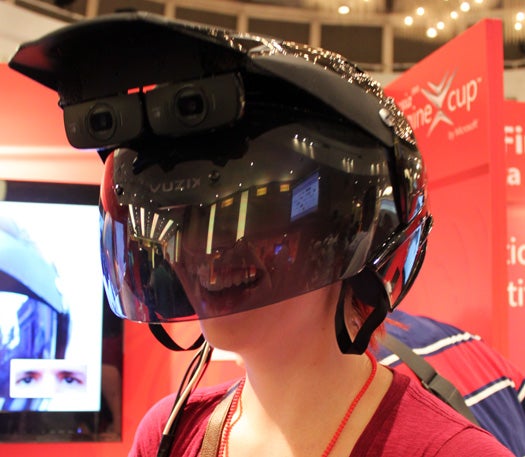 Team M1R from Spain, which is really just one guy, Sergio Rivas Gomez, created one of the craziest projects I’ve ever seen at any Imagine Cup—an augmented reality helmet that has 3-D vision and responds to the movement of the wearer’s eyes, and her brain waves. When I wore it, and looked at a piece of paper with Russian text on it, the helmet translated it, displaying the text in English right below. It’s like Google Glass, except that, in Gomez’s view, it could do everything from give surgeons super-vision to create more immersive video games. “If he doesn’t win something, I’ll eat my hat,” I thought, because I actually think things like that. But he didn’t, so I guess I have to. It just goes to show how steep the competition is. As Matt Smith put it, “I was completely astounded by the level of some of these projects,.I was expecting, like, volcanoes that blow up and stuff.”

Volcanoes they are not. The projects use cutting-edge technology, mostly Microsoft’s, of course—these teams know which side of the bread their butter is on. But many of the app developers acknowledge the reality of the market and plan to roll out their products for Apple and Android technology too, in the future. Unlike a normal science fair, when these students pack up and go home, it’s hardly over. All of them are eager to tell me what’s next, what they’re improving for the next version, what business they’re going to talk to for funding. So it may not be long before we’re writing about some of these students again. 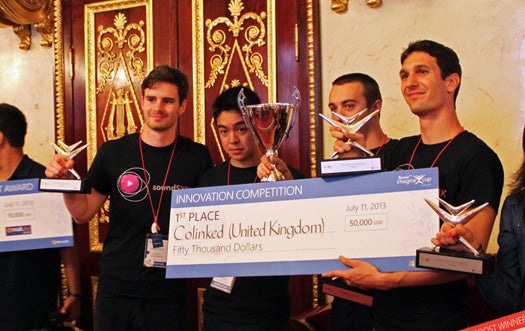 Team Colinked’s soundSYNK app improves that moment when your friend insists that you have to hear this new song RIGHT NOW, and a large group of people crowds around a small smartphone to listen. One person with the app can “throw” the song to another, who then “catches” it, each with a small shake of the phone. The app then syncs up the song on both phones, so they play it in perfect unison. With enough phones, you can spread the song like a virus. “Whenever you want to listen to music with your friends, it’s all together, it’s in the moment,” says team member Jonathan Neumann Massey. So they created soundSYNK as an “impromptu social network,” that you can use at the beach, on a train, or wherever. The app is operated on a Bluetooth mesh network, meaning you don’t need to have Wi-Fi access to use it. Theoretically, the network could support up to 65,000 devices, though of course the team hasn’t tested quite that many yet. In addition to the $50,000 Team Colinked received from winning the Imagine Cup, they’ve also snagged a £10,000 grant from Creative England and £8,000 from the University of Exeter, where they study. 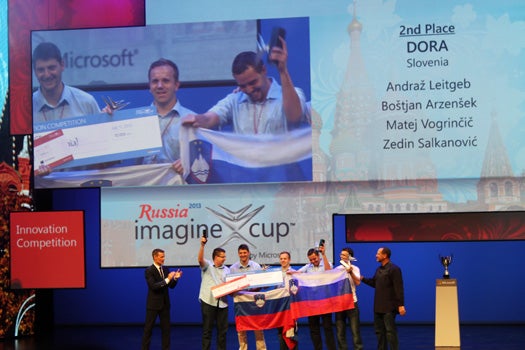 DORA is a software program designed to serve as an interactive physician’s assistant. The team wanted to improve the efficiency of medical treatment using technology, and created DORA. The software displays patient information for easy reference before and during surgery, and allows surgeons to consult with their colleagues during procedures. Team DORA claims that using their program would cut the cost of surgeries by about 20 percent, according to UKC Maribor, a Slovenian hospital that the team worked with. 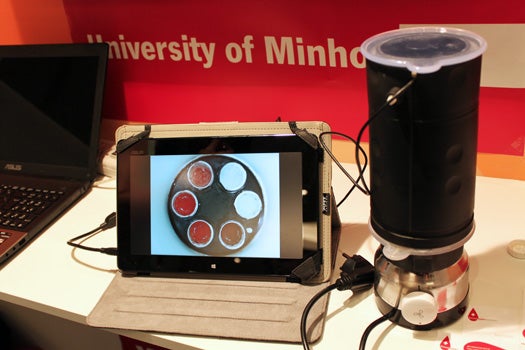 Ana Ferraz, the one and only team member of Team For a Better World, made a cheap, portable device that can quickly determine someone’s blood type in 5 minutes. It has six containers for blood, into each of which you put a reagent. A small centrifuge in the device mixes it up, causing agglutination in some containers, or not, depending on the blood type. The lid of the device contains LED lights and a camera, which takes a picture of the test results and sends it to the software program on a computer. The software analyzes the photo, and determines the blood type. Ferraz says the system could be used in the future to test for other diseases that would react with agglutination to certain reagents, such as syphilis. “With this portable prototype that eliminates travels to the laboratory, [you can] earn up time to save lives,” Ferraz says. 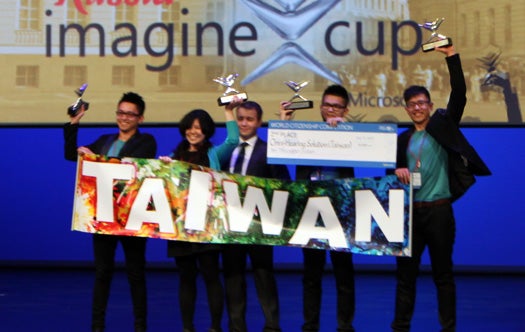 Omni-Hearing Solution is a smartphone app alternative to the traditional hearing aid, inspired by one of the team members’ grandmothers, who didn’t like wearing her hearing aid and said it didn’t help her enough. They developed a sound processing technology for the Windows Phone hearing aid app that minimizes distortion and lets users hear high-frequency sounds, which are often difficult to hear with traditional hearing aids. Users also have the option of using a Bluetooth headset that’s connected through the cloud. Team Omni-Hearing Solution also got second place in the Women’s Empowerment Award category, presented by Microsoft and United Nations Women. 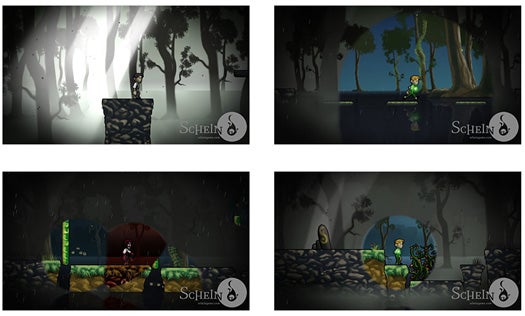 Light is power in Team Zeppelin Studio’s game Schein. A weird little dude named Irrlicht explores a dark and murky swamp, using light to defeat monsters, solve puzzles and more. In the team’s bio on the Imagine cup site, they said they were inspired by ghost lights: “illusions which are said to most often lead lost wanderers into peril.” “Our goal is to mix science and art, creating new fantastic worlds with ingenious gameplay,” says team member Philipp Schäfer. Apparently, along the way, Irrlicht’s “difficult journey challenges his sanity,” which sounds promising. 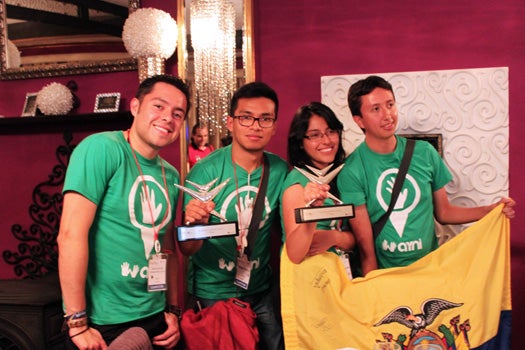 A group of Ecuadorians who love volunteering created AYNI, a social network based on maps that connects volunteers with the nonprofits and agencies that need them. The maps let users find work they can do in their area, and gives visibility to smaller organizations that might not have much publicity. Users can input their interests and skills, making sure that organizations receive volunteers who are qualified to do the work. AYNI’s integration with Facebook earned it this award as well as $25,000 worth of Facebook advertising credits. The team says they plan to roll it out first in Ecuador, then hopefully in surrounding countries.

The Russian branch of Colonel Sanders’ empire offered an award to a team with a health-focused Kinect project, which is just too rich coming from the creator of the Double Down, but anyway, the award went to Canada’s Team Sano, which battles the developed world’s number one health problem: our own laziness. Sitting kills, we all know that by now, and the Sano system monitors several of the user’s health indicators while they’re sitting at a computer and notifies them when they should take a break and exercise. A 3-D virtual trainer guides them through the exercises, and a Kinect recognizes that they actually perform them. Users can also create and save their own exercises, if they wish. As part of the prize, Team Sano’s system will be displayed in a KFC restaurant somewhere in Russia. 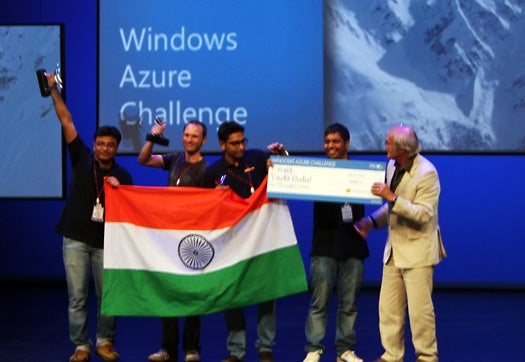 “When we are bored, we end up being on social networks, just sitting in front of the computer,” says Team Y-Nots member Anshal Anand. “The point of social networks is to be social.” So the team created Zoik It!, a social network that lets you put in your location, and an activity that you want to do and finds people in your area for you to hang out with. For example, if you had a long layover at an airport and wanted to grab coffee with someone with similar interests, a quick Zoik It! Post could find you a new pal. Team Y-Nots also won first place in the Mail.Ru Group-sponsored Connected Planet Award.
Projects
apps
Augmented Reality
microsoft
russia