A DIY Arcade Claw Controlled By A Smartphone

Leave your quarters at home 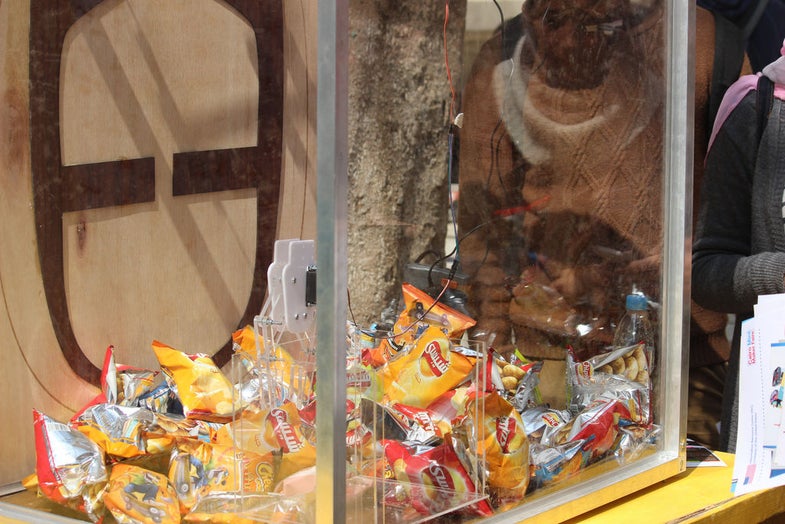 Want to snatch a treat with a candy-grabbing machine? It will probably cost your body weight in quarters—unless you follow Mahmoud Tolba’s lead and build your own. The engineer at Egyptian startup Integreight wanted to create something fun with 1Sheeld, the Arduino shield his company manufactures. The device attaches to an Arduino to give the board extra functionality, in this case enabling it to interface with a smartphone. Tolba used 1Sheeld to steer a mechanical claw with his phone.

In March he brought the finished machine—loaded with bags of potato chips—to the Cairo Mini Maker Faire. It was, not surprisingly, a hit with kids, who refused to stop playing with it even “when the time ran out and the machine stopped moving,” Tolba says. His next project will also dispense food—it’s a vending machine controlled by tweets.

Instead of prototyping by trial and error, Tolba designed his candy grabber with engineering software SolidWorks. With help from a friend, he built the body of the machine from aluminum bars, plywood, and transparent acrylic sheets. An Arduino controls the claw, made from acrylic pieces held together with screws. Players can input commands to the Arduino through 1Sheeld’s smartphone interface.

For information on building your own arcade grabber, check out Tolba’s Instructable.