Shapeways, an online 3-D printing company, opened an enormous "Factory of the Future" in Queens, New York that could house 50 industrial printers and churn out millions of consumer-designed products a year. 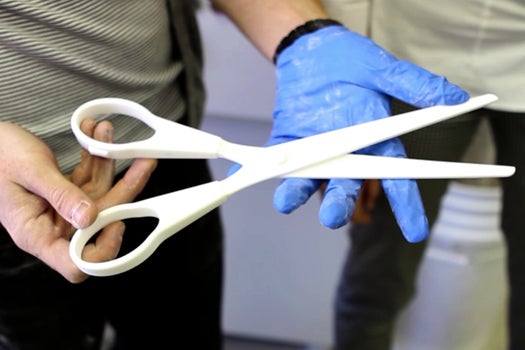 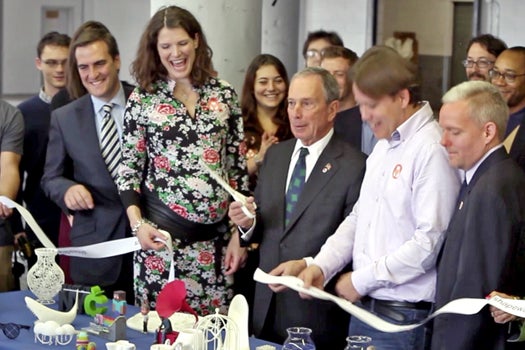 Bloomberg Opens “Factory of the Future”

The world’s biggest 3-D printing factory dedicated to consumers opened with the snipping of nylon scissors this week in New York City.

Mayor Michael Bloomberg reached into a block of dust and grabbed the shears, which lasers built layer-by-layer earlier in the day. He later cut through a commemorative ribbon to open the 25,000-square-foot “Factory of the Future” in Long Island City, Queens.

Running the new facility is Shapeways, a Netherlands-based company that lets customers upload bespoke 3-D designs, and then prints and ships the objects in the span of a few days.

Shapeways CEO Peter Weijmarshausen told a crowd in a mostly empty floor of a warehouse that many of his customers live in and around New York City, so opening a factory there makes a lot of sense.

“This is the future of our city,” said Bloomberg, who views the factory as part of a larger strategy to make the city a mecca of technology (the mayor’s administration gave Shapeways a tax break to attract the startup).

Shapeways hopes to fill the factory with 50 high-resolution industrial 3-D printers that are just hitting or have yet to hit the market. Weijmarshausen says the collection of yet-unnamed machines will print objects out of a gamut of materials ranging from acrylic, nylon, and glass to gypsum, ceramic, and sandstone — even precious metals such as silver. To run the machines day-in and day-out, Weijmarshausen says he needs to hire about 50 skilled employees.

Shapeways spokesperson Carine Carmy told PopSci that the main factory floor — currently a dusty concrete slab — should be finished and filled with printers, product polishing stations, and other equipment around January 2013.

Drop in on the factory’s grand opening in the video below.