Earth Has A Layer No One Knew About 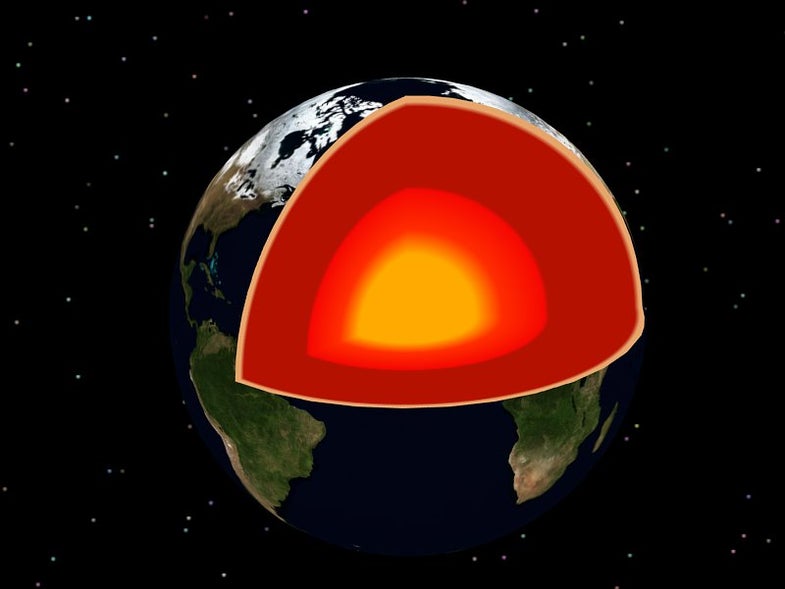 Our perspective of Earth tends to be very shallow–literally. Everything we experience, from the deepest depths of the ocean to the highest mountain peaks, only skims the top of the outermost layer of the Earth, the crust, which is about 4 miles thick under the ocean and 20 to 30 miles thick on land. With a radius of 3,959 miles, the Earth has plenty of secrets buried inside it.

But today it has one less secret. Researchers have just published a paper in Nature Geoscience announcing they’ve discovered a remarkably stiff layer in the Earth’s mantle–the layer of molten or pliable rock located between the crust and the Earth’s core. The new layer floats somewhere around the middle of the mantle.

In this case, the researchers knew from previous studies that tectonic plates (which hold the oceans and continents) sometimes slide under each other and get pushed down into the mantle. Those slabs of rock tend to stop moving temporarily at around 930 miles below the Earth’s surface, but no one could figure out why. Observing the process directly was out of the question–because for one, no one has ever drilled down to the mantle, and secondly, the process of a slab sliding down into the mantle takes around 300 million years. So Miyagi and his team did the next best thing.

They used an instrument called a diamond anvil (made from, yes, diamonds) to apply massive amounts of pressure to rocks commonly found in the mantle. When they got to pressures that mimicked conditions at that 930 mile depth, they found that the strength in the rocks had increased by an insane amount–it was nearly 300 times stronger than that same type of rock would be at levels higher in the mantle. Below that 930 mile point, atoms within the rocks start to move more freely, loosening up, and allowing the slabs to sink.

But because the rocks at the 930 mile boundary are so strong and stiff, slabs of the tectonic plates stall out for a while, caught between a rock and a stiff place.