Control Your Smartphone With Stickers On Your Skin

For those times when your pocket is just too far 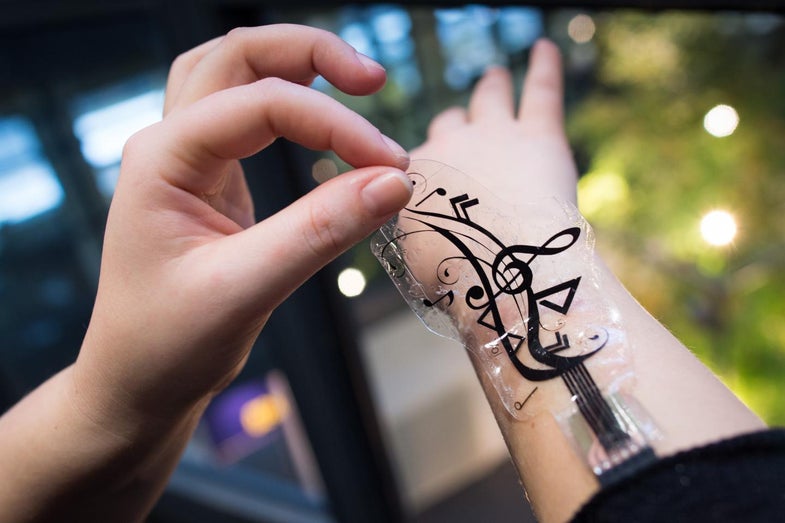 Fumbling for a cell phone that rang during a meeting can be pretty embarrassing, and tapping out an email on a smartwatch is always a frustrating experience. To make mobile devices even simpler to control, a team of German and American computer scientists has created a patch called the iSkin that turns your epidermis into a digital interface. Just place the patch on your preferred body part, and with a few simple taps, you can answer calls, raise or lower music volume, or type on a bigger smartwatch keyboard without having to grope for the phone in your pocket or bag.

The skin is the “next frontier” for wearable devices, the researchers write in their paper, published in conjunction with the upcoming SIGCHI conference in Seoul, South Korea. Other researchers have developed methods for connecting the skin to mobile devices using cameras, magnets, bio-acoustic sensors, and light-reflective sensors. But many of these methods are not as precise or as versatile as the iSkin, its creators claim. “I am not aware of other smart patches that sense touch input,” says Jürgen Steimle, a computer scientist at Saarland University and one of the authors of the paper.

iSkin patches are made of layers of thin, flexible silicone—the same squishy material used in everyday products from window sealants to cookware. The silicone is breathable and can be manipulated into any shape on any part of the body without damaging the patch, which means it can venture to challenging body parts like the back of the ear or the side of a finger. To receive and transmit tactile input, the iSkin houses electrodes sandwiched between the silicone layers. A black carbon powder connects the electrodes to one another, allowing them to be situated into any design. The electrodes all link back to a computer chip, which connects the iSkin to a mobile device with various cables.

Without the computer chip or connecting cables, the iSkin costs about $1 for a letter-sized sheet, the researchers estimate. For now, the patch can only be used to control a smartphone, though the researchers envision that it also could be used as a remote control for almost any electronic device or to gather a person’s health data such as blood pressure and body temperature.

The iSkin, it seems, isn’t quite ready to appear on a forearm (or forehead) near you. Its creators want to make the larger patches more sensitive but still immune to random or accidental touches from other objects. Ideally, the researchers write, the iSkin would have its own stretchable visual display so that rigid computer chips and annoying wires wouldn’t bog it down. Future versions of the patch may not be isolated to the skin at all, sticking to various surfaces to provide an impromptu keyboard.

So for now, you might just have to undertake the laborious task of reaching into your pocket to answer a call on your cell phone.