This weekend, Tony Kanaan wears something no driver has ever worn before 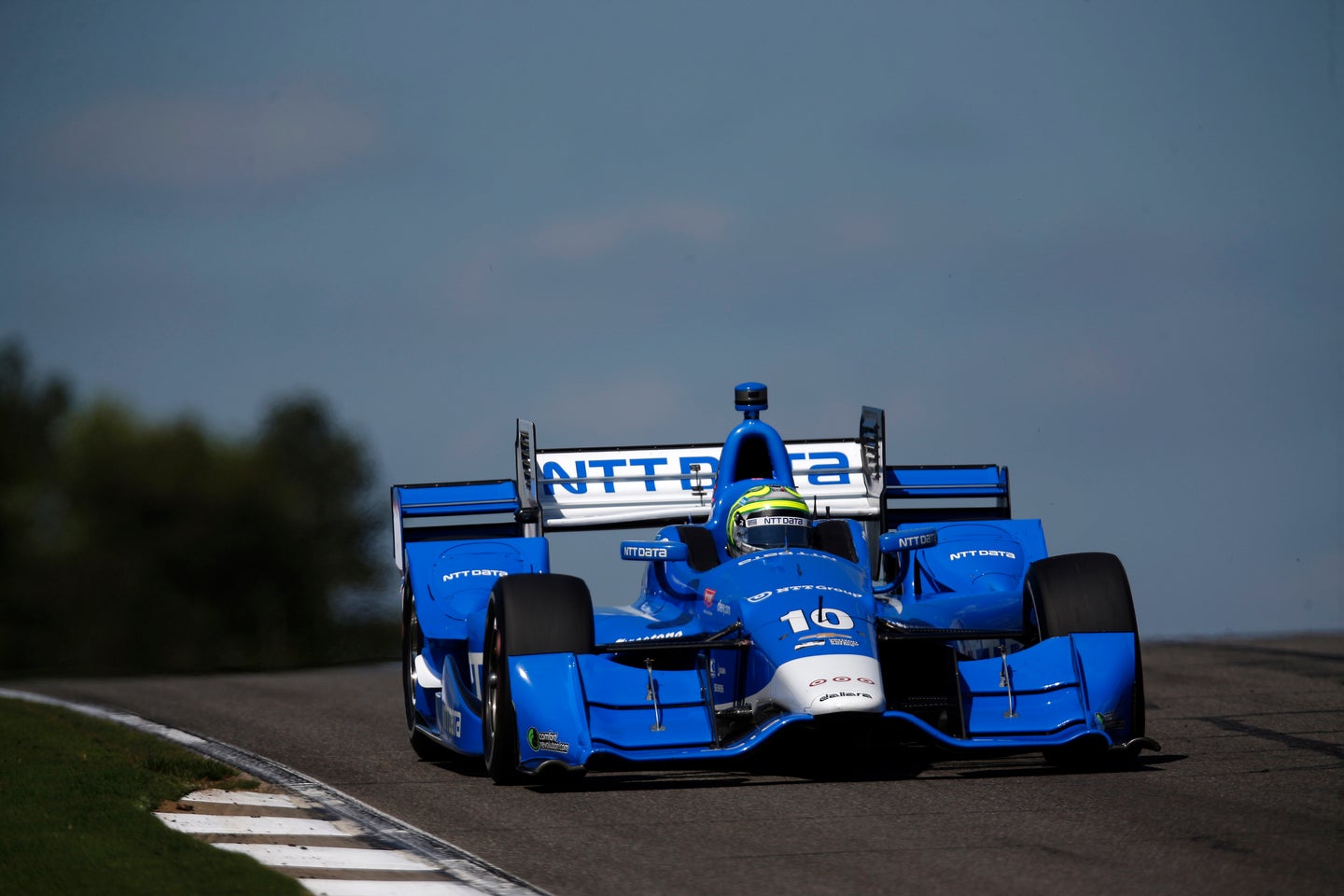 At this weekend's Firestone 600 at Texas Motor Speedway, in Fort Worth, Tony Kanaan will be the only driver measuring his breathing, heart rate, and muscle tension via NTT Data's Hitoe sensor shirt. LAT USA
SHARE

When Tony Kanaan gets behind the wheel of his Number 10 racecar Saturday—gunning for victory in the IndyCar Firestone 600 at Texas Motor Speedway, in Fort Worth—he’ll steer 1,570 pounds of metal, powered by a 675-horsepower engine, racing at speeds of up to 225 mph.

That can make a guy sweat—especially in turns that create 5 G forces, when drivers in open-wheeled IndyCars are often inches from each other’s tires and the slightest tap can launch your car into the air like a rocket. (It makes the closed-wheel world of NASCAR, where spinouts are often the biggest headaches, look like kid’s play). In such conditions, the slightest muscle twitch can mean the difference between a big win and being airborne.

So Kanaan is particular about what he wears in his cramped cockpit for those two hours of white-knuckle concentration. In addition to his regular fire suit, this season he is wearing something no racecar driver has ever worn before: a shirt with electrically conductive nano-fibers. It measures things like his breathing, heart rate, and even muscle tension as he grips the steering wheel. In the racing world—where you don’t fix what ain’t broke—adopting wearable sensor technology is a big deal. “We’re not very trusting of anybody outside our industry,” says Brian Welling, Kanaan’s assistant engineer and the man who monitors his car—and now his shirt, “To get us to use this thing, that’s a coup.”

NTT Data, a global IT company that sponsors Kanaan’s Chip Ganassi Racing car, created the shirt, which is known as Hitoe, to help Kanaan gain ground on competitors. The Hitoe shows Kanaan’s team moment by moment when he’s tensing unnecessarily, how much his stress levels spike when he passes a competitor, and when his heart rate increases–for example, coming into a pit stop on a caution flag—helping Kanaan improve.

“No one has ever studied the heart rate and muscle fatigue of race car drivers during a race,” says Kanaan, the Indy 500 champ in 2013, who holds a record 249 consecutive starts in his 19 years of IndyCar racing. “If I can understand these things in real time, I can better control them to help my driving. I can also tailor my workouts to improve my heart rate and lower body strength.”

Named for the Japanese word for a kimono with no lining, the Hitoe has no wires. It uses nano-fibers with coating that are woven together to make it conductive. The conductive textile acts as the electrocardiogram and electromyogram sensors. This textile is sewn into Tony’s fire-retardant Nomex shirt to record his heart rate and muscle tension through bioelectric signals. 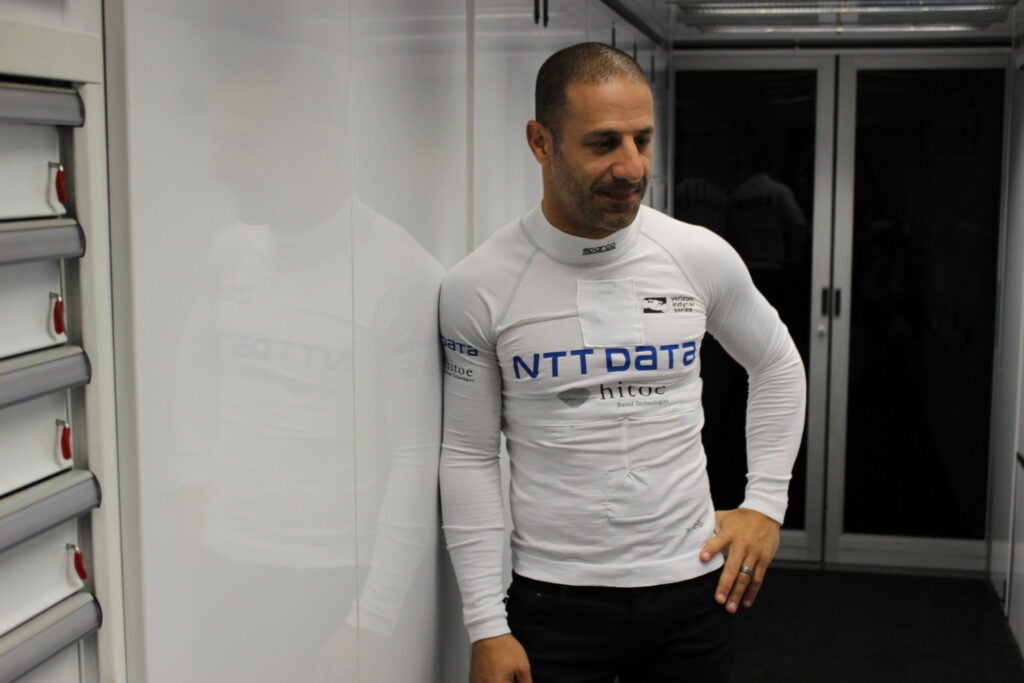 The shirt’s backstory is equally impressive. The inventor of the technology, Shingo Tsukada, works for NTT Laboratories in Atsugi, Japan. A neuroscientist and a doctor, Tsukada’s research began with finding ways to create a neural prosthetic. He wanted to create a tiny electrode that could be inserted into the brain. To do so, he explored ways to reconnect damaged human nerves by passing electrical signals through a thin needle. But needles, he found, caused inflammation and broke down the brain tissue around them. So Tsukada decided to create a fabric that mimicked the body’s own tissue. He developed a strong material using silk threads that could be used as an electrode, making recordings of nerve signals. That in itself would have been a breakthrough.

But then on March 11, 2011, a magnitude-9 earthquake shook northeastern Japan, shifting the Earth on its axis of rotation like a thumb on a spinning top and shortening the length of the day by about a microsecond. Less than an hour later, the first of many tsunami waves hit. The waves surged up to 128 feet, disabling the power supply of three nuclear reactors in Fukushima, melting all three cores in a matter of days. In addition to the 15,000 people who died as a result of the earthquake and the tsunami, over 100,000 people had to evacuate the nuclear radiation zone.

“After the tsunami, our laboratory had to shut down for several weeks, and my neural science had to stop,” says Tsukada. The hospital he’d been working in had to relocate many of their patients. In the midst of this tragedy, he says, “I noticed that this kind of material is useful for remote monitoring. So I tried to make by hand a T-shirt,” to help doctors who could no longer see their patients in person. That was the initial prototype of Hitoe.

Today, the Hitoe is made from nano-fibers. The commercial version, which Kanaan wears during workouts, is 700 nanometers thick (the average T-shirt is 15,000 micrometers). The dense nano-fiber textile increases the area of contact to the body (i.e. skin), which in turn increases the signal quality of the sensor textile compared to other micro-fiber based monitoring devices. The shirt (which is sturdy thanks to its density and can last for more than 100 washes) looks exactly like a moisture-wicking workout shirt—although, in the case of Kanaan’s racing version, one that’s flame-retardant to abide by IndyCar league standards.

Already, there have been a number of surprising insights from Kanaan’s time in the shirt during races and training this season. “We built a dashboard for Tony,” says Mayank Gandhi, director of Information Management and Analytics at NTT Data. For example, when Tony’s steering, he has to brace his body to counteract the G-forces of cornering the car, which can reach as high as 5 Gs. Welling explains, “We have GPS and these guys build a track map. You can analyze later the acceleration and couple that with the shirt analysis.” One of the bigger takeaways is that when Kanaan goes around a corner, he holds his breath for about two seconds. “You can correlate lateral Gs to the driver holding his breath,” Welling says. The lack of oxygen and the stress of bracing his body shows on the EMG data—where it blurs, it indicates growing fatigue.

Analyzing data isn’t entirely new for Welling, who has about 50 sensors on the chassis of Kanaan’s car that can track all kinds of metrics, such as aerodynamic balance and brake pressure. But even Welling has been impressed with Hitoe. “They have their one sensor and it tells them ten different things,” he says. “Apparently the human body is more difficult to understand than a race car.”

“What I’m hoping to learn,” Kanaan says, “is in a two-hour race, what’s my average heart rate? Muscle fatigue, and how it affects you.” He hopes to tailor his off-track workouts (His Hitoe workout shirt also monitors his posture) to be more specific to the muscles he needs to strengthen.

Tsukada sees all kinds of potential applications for his Hitoe technology. For patients who’ve gone home from hospitals, for example, wearable technology like this could help doctors monitor their vital signs from afar. Many professions that place people in dangerous situations might also benefit, like tracking airline pilots and long haul truckers. In other words, it might help stop crashes. Unlike the Internet of Things, Tsukada says, “Human sensing is difficult because the human body signals are very different. To be able to record these signals with direct monitoring in dangerous situations will help us detect risks.” In other words, it might help stop crashes before they happen.

That’s what Kanaan is hoping too. “As a race car driver you don’t want to add stuff to your car. But once they explained what they want to use it for in future patients, to help someone not stay in the hospital for so long and lead a better life, I was into it.”

This story has been updated after publication to correct the thickness of the shirt (from 700 micrometers to 700 nanometers) and the number of washes (from “more than 700” to “more than 100”). 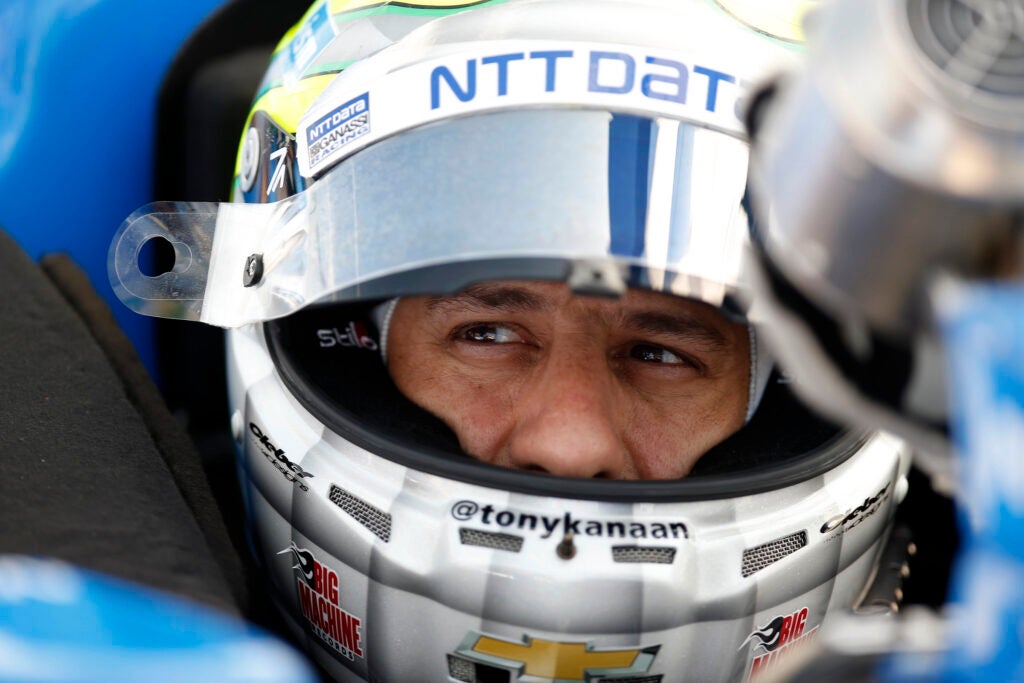 Looking to the future

Kanaan’s Hitoe shirt technology may one day help doctors remotely monitor patients, alert long-haul truckers and airline pilots when they are too tired to work, and even measure harmful toxins inhaled by mine workers.
Vehicles
Features
Sports