3-D monitors are about to get social 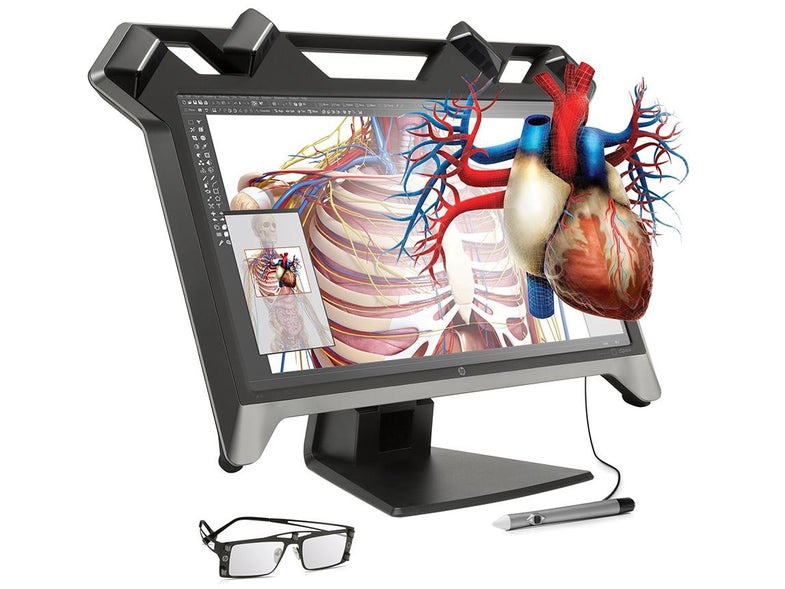 The Oculus Rift virtual reality headset can transport you to another world. But it’s also a singular, isolating experience. HP’s Zvr Virtual Reality Display instead brings the virtual world into our own, so students, developers, and designers can work and collaborate in a 3-D environment—without leaving reality behind.

The 24-inch HD display uses passive 3-D screen technology, head tracking via four cameras, simple lightweight glasses, and a pen-like controller (not wireless, unfortunately) to turn your desktop into an interactive 3-D environment, straight out of Cyberpunk fiction. You can click to pick up and move objects within the 3-D space, spin them around, and otherwise interact with them. The demos that HP has on display are somewhat limited, but it’s clear that there’s a lot of potential for education, medical training, as well as 3-D design work here. A larger, secondary 2-D monitor, combined with a camera, allows others in the room to see what the user sees, which would definitely be helpful for education.

In my brief hands-on demo, the display worked flawlessly, and the experience was compelling and immersive as I manipulated objects that appeared to float above the screen, and pulled apart sections of human anatomy. Users do need to remain in a relatively narrow area in front of the display for everything to work, though. So this tech may be better suited to serious work and education than gaming.

HP didn’t develop the display’s underlying technology. Instead, they’re licensing it from a company called zSpace and partnering with them to bring the Zvr to market. There’s no word on price yet, but that should come as we get closer to the availability date, which HP says should be this spring.