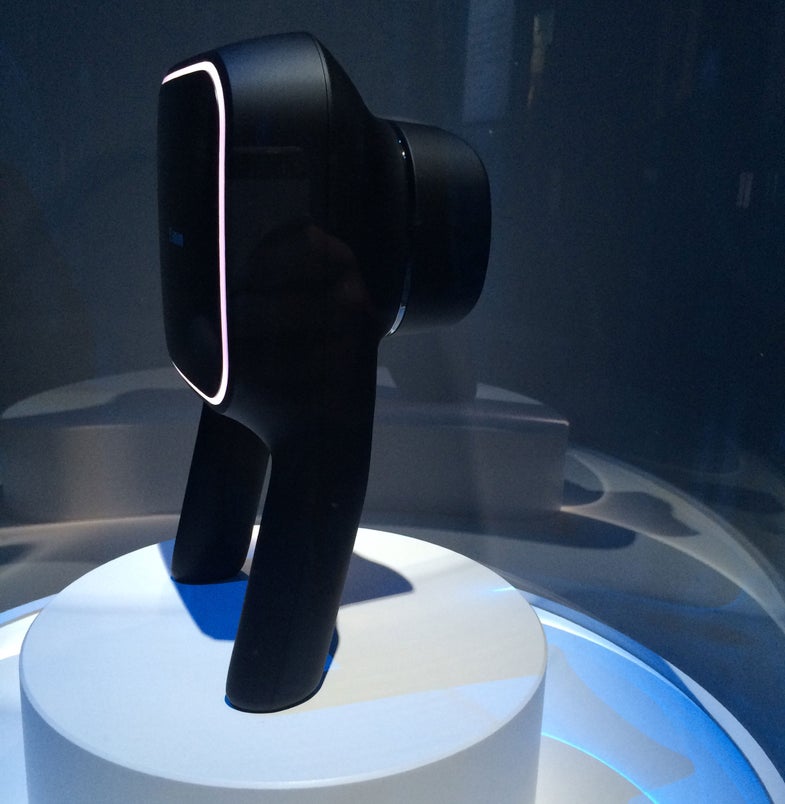 Canon teased a prototype of a virtual reality headset this week at its 2015 Expo in New York City. Dave Gershgorn/ Popular Science
SHARE

Most of the virtual reality offerings we’ve seen so far have been from dedicated startups like Oculus, or mobile companies looking to the future, like HTC and Samsung. But now a company known for its optics has entered the fray.

Canon showed off an early “secret” VR prototype at its 2015 Expo this week, in the form of a relatively large handheld device. The VR periscope is held to the user’s face, and then tracks motion in a 360 degree sphere. The headset has total 2.5K resolution, with 120 degree field of vision. Inside, there are two 5.5″ displays, each 2560×1440. Canon says the video itself is recorded at a 56000×28000 resolution.

I got a chance to try a pre-baked demo on the headset. Headphones were separate from the device, which in true prototype form had a thick cable running from one handle to an undisclosed location.

My first thought when I saw the device was that it looked heavy, and arm fatigue is a killer when it comes to strapless VR. But throughout the demo, which lasted about five minutes, my arms didn’t get tired and I honestly forgot I was even holding something up to my face. The display was impressively sharp and tracked well, with no visible blind spots. In the demo I was circled by what I surmised was a Flamenco band, who were all singing at me, then I was listening to an orchestra, and then I was looking up at the night sky. The entire video was shot on Canon equipment, so its clear the company is looking to make VR an end-to-end Canon experience (however, the internal LCD panels were not built by Canon).

Canon also showed off an array of seven 6D cameras, and a 24-camcorder setup, that were used to capture the VR experience’s video.

The Canon representative at the demo said that the design is preliminary, so a finished product could end up being truly head-mounted. They see this in use for education, military, and of course, personal entertainment. To me, it feels like an educational device. It’s sturdy, easy to use, and best of all, doesn’t take a lot of finagling to put on and use—just hold it to your face. I was also able to use it with my glasses, which is a huge plus for me (and I’m sure the dozens of us who resist the siren’s call of contact lenses).

Canon is also developing its own mixed-reality headsets for use in manufacturing, which allows designers to work with virtual elements in tandem with fabricated automotive and airline parts.