Google Maps is bringing traffic estimates back to its estimated travel time feature, and this time it’s relying on realtime... 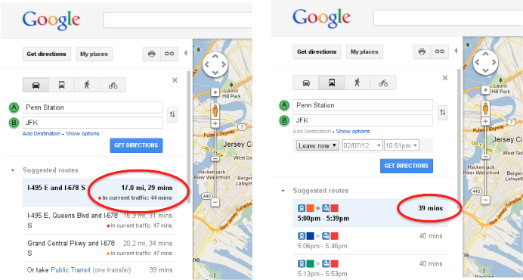 Google Maps is bringing traffic estimates back to its estimated travel time feature, and this time it’s relying on realtime data obtained from third party reports and drivers voluntarily running Google’s “My Location” feature on their Android phones. The reboot hopes to stifle user frustration with the old traffic estimate feature and, hopefully, to make Google Maps a more accurate predictor of transit times in urban areas around the globe.

Google Maps has long offered an estimated transit time when users query it for directions between two locales. But you may recall that last summer Google pulled its feature that estimated transit time given current traffic conditions because the app was simply failing to offer good enough estimates. The app was relying on historical traffic data to estimate the time it would take to travel a certain distance at a certain time of day, and traffic being as fluid as it is the app was often wrong–sometimes way wrong. Miss-your-plane wrong.

Now, Google is reintroducing the app with realtime traffic data mined from Google Android users who enable the “My Location” feature on their phones, which allows Google to track their positions in realtime. Using that data, as well as other third-party data (and historical data), Google Maps will now offer users a transit time estimate under ideal traffic conditions as well as an estimate given the current traffic between the origin and destination points.

If it works, the new system could finally put to bed the issues that plagued Google’s old traffic time estimates, namely their chronic inaccuracy. That’s largely reliant upon how many users opt in to the “My Location” feature and how good Google is at extrapolating current traffic conditions from that data.

Because Google needs a large enough data set to make meaningful predictions, the new feature isn’t offered everywhere (though it is working in most densely populated areas–read: major urban centers). The more people who turn on “My Location,” the faster the feature will grow and the more accurate it will become–hopefully making us all a little more punctual in the offing.