Japan's Keio University created the shocking Ellica, an electric supercar that could out-run some of the world's fastest exotics. Now for their next trick -- public transportation. 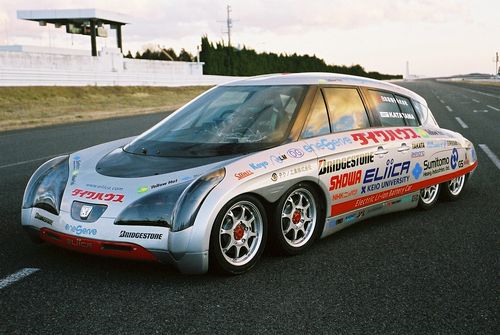 It resembles an early ’70s Citroen sedan, recast for Blade Runner-era Los Angeles. But this Japanese-built electric oddity, dubbed Ellica by its developers at Keio University, will reportedly spawn something with a bit less techie-sex appeal — a bus. The university announced a deal last week with Isuzu Motors Ltd, the Kanagawa prefectural government, among others, to develop a full-sized electric bus for Japan based on the eight-wheeled, 230-mph research project.

Dr. Hiroshi Shimizu, the university’s professor of Environment and Information Studies built the Ellica (Electric Lithium-Ion Car) over two years in the mid-2000s with a team of engineering students, stunning gearheads with supercar-like performance figures — 0-60 in 4.1 seconds and a top speed higher than a Ferrari Enzo’s. Eight, in-wheel electric motors each provide the power equivalent of 80 hp. Those eight small wheels, instead of four large ones, allow for a lower floor and center of gravity.

Japanese technology web site Tech On reports the Ellica will form the basis for a new electric-bus prototype with a flat, low-height floor. Isuzu Motors will design the body and Toshiba will contribute a lithium ion secondary battery with a capacity of 120kW, providing enough juice to shuttle passengers — both replicants and humans, presumably — 93 miles, or 150km, on a charge (the travel distance of a typical shuttle bus in Japan is about 75 miles per day). Tokyo Electric Power Company will create a charging infrastructure for the new e-bus.

The partners plan to complete development by late 2010, with volume production in Kanagawa Prefecture scheduled for 2011. Japan’s Ministry of the Environment kicked in $5.16 million for the project.

[Tech On via Tech Crunch]