A shock absorber that generates energy and increases fuel efficiency 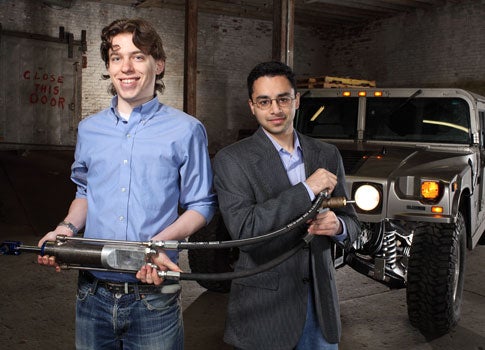 The idea for an energy-producing shock absorber started humbly enough, just another wild invention tossed out during a late-night dorm-room bull session. Only, the students involved were among MIT’s best, and they actually went ahead and built it. Two years later, they’ve got a shiny Hummer H1, loaned by the manufacturer to use as a rolling testbed, and their GenShock may soon find its way into the military’s fleet of Humvees.

The team — Shakeel Avadhany, Zack Anderson, Zack Jackowski, Ryan Bavetta and Vladimir Tarasov — came up with a way to harness the energy generated by the up-down motion of a vehicle’s shocks as they compress over dips, bumps and potholes. The power that the GenShock system produces lets the alternator, which is driven by the engine and provides electricity to charge the battery, do less work. And that, ultimately, saves fuel.

They began by creating a simple hydraulic system, in which the shock absorber’s piston pumps fluid to drive a hydraulic motor and a miniature electric-motor generator. The team’s first prototype generated a total of 800 watts of continuous power with four shocks, and up to five kilowatts — about seven times as much as a typical car alternator produces — over nasty off-road terrain. They estimate that their next version could double the generating capacity, boosting fuel mileage on paved roads by 2 to 5 percent in commercial trucks and 6 percent in military vehicles, which when fully armored can slurp diesel at a dispiriting four to eight miles per gallon. Hybrids, which can store GenShock electricity in their batteries, would gain the most — up to 10 percent. 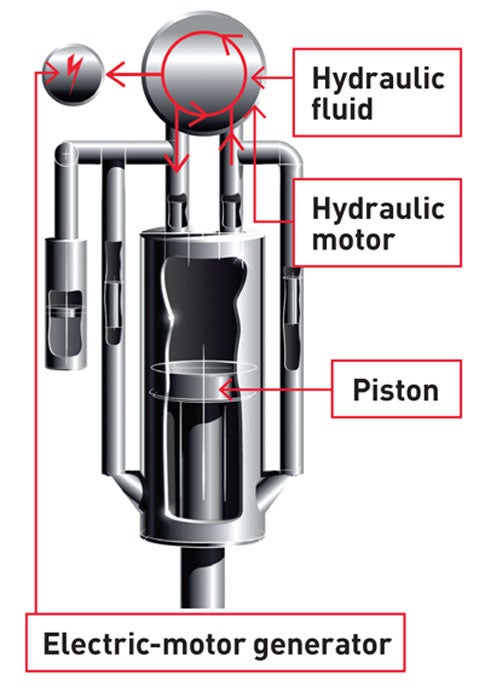 As the vehicle moves, the shock compresses and its piston pumps fluid to drive a hydraulic motor and an electric-motor generator. The power that’s produced lets the engine-driven alternator do less work, saving fuel

As a retrofit for large commercial trucks, “the system could pay for itself in fuel savings in a little over a year,” Avadhany says. Although paved roads generate less shock movement, the regular high-frequency oscillation can still produce useful power. And as a bonus, the invention could potentially provide better performance and handling when coupled with a computer sensor system that reads the road and varies resistance over the shocks.

MIT’s licensing department showed interest in acquiring the technology, but in 2007 the group decided instead to incorporate as Levant Power. Later, one of their professors brought their work to the attention of Paul J. Kern, a retired four-star army general and the president of Humvee manufacturer AM General. He wanted further evidence of GenShock’s electricity-generating potential. “It started as, ‘Let’s see what you can do,’ ” Avadhany recalls. “We weren’t expecting them to ship us a Hummer in the mail.” When the device showed promise in tests, a lucrative development contract followed.

Working between classes from a rented warehouse and makeshift office in South Boston, the team outfitted the hulking SUV with the GenShock system and data-acquisition gear. During 500 miles of real-world testing, they began replacing existing components with custom miniaturized parts to scale down the shock’s size and weight and generate more power, while meeting the military’s sky-high standards for durability and performance. The system must last the lifetime of the vehicle, operate effectively when submerged in water, and limit electrical noise that could cause interference with other equipment.

The group is now speaking with the Office of Naval Research; the army’s Tank Automotive Research, Development and Engineering Center; and truck builders such as Navistar and Mack Trucks. If any of those groups put in an order for the GenShock system, the inventors, now all graduated, won’t even have to send out their résumés. “This is it,” Anderson says. “This company is our job.”