At the height of the automotive industry crisis, carmakers tried to smile through the pain 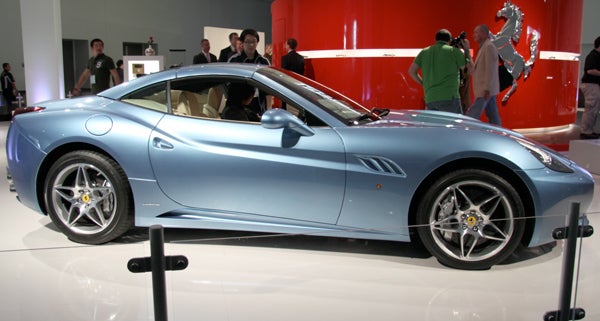 Probably the most attractive exotic car on the floor was Ferrari's California, a brand-new V-8 powered hardtop convertible whose image will soon decorate the bedroom walls of teenagers everywhere. Seth Fletcher
SHARE

The movement of the crowds at the semi-funereal 2008 Los Angeles Auto Show said it all. No one, it seemed, wanted to hang out with the most beleaguered of the Detroit automakers, Chrysler and GM. As plenty of attendees noticed, Chrysler’s large expanse of showroom floor was all but empty most hours of the day. Same across the room at the General Motors stand: Aside from a small group milling about the Chevy Volt, all was quiet. The mob of journalists appeared smaller than normal this year, and they congregated around the imports: Nissan attracted a good crowd, as did the German manufacturers and Hyundai. Aside from Ford, which did its best to put on a happy face, Detroit was present mostly as the constant subject of grim conversations. “This is the last auto show ever, you know,” joked a journalist friend. We laughed, sadly, and then thought ahead to January—what will the_ Detroit_ auto show be like?

During Nissan CEO Carlos Gohsn’s keynote address the opening morning, it was possible to imagine a post-Detroit future. While the CEOs of Detroit’s Big 3 were in Washington, taking their lashes before an unsympathetic congress, Gohsn was speaking soberly and authoritatively about the challenges at hand and convincingly about Nissan’s plans to deliver mass-market electric cars within the next two or three years. In a post-Detroit future, Asian automakers would probably rule the mass market with their small, sporty, fuel-efficient cars, while German brands like Mercedes, BMW, and Audi will continue to dominate the luxury market. And then there are the wild cards: What about Tata? What about China? What about small automakers that don’t yet exist?

Neither GM nor Chrysler gave a press conference. Ford unveiled a new Mustang and an impressively practical Ford Fusion; Mazda, which is owned by Ford, revealed the new Mazda 3, one of the nicest looking small cars at the show. These are good cars that should sell, as soon as people are in the mood to buy cars again. Yet the crowd at the show seemed most excited about clean diesels from Germany (like the Volkswagen Jetta TDI, which won Green Car of the Year), and the electric cars available for test drive—the Mini E, the Mitsubishi iMiev.

This was the backdrop on the second day of the auto show’s press preview: Detroit’s Big 3 CEOs left Washington with nothing more than an order to present business plans to Congress in early December. California Rep. Henry Waxman, an ardent environmentalist from Los Angeles, replaced pro-Detroit congressman John Dingell in his post as chairman of the house energy and commerce committee, making it all the more likely that automaker will soon face much more stringent environmental and fuel-economy regulations. The Dow dropped to nearly 7,500. And by mid-afternoon most journalists had left the showroom floor, wondering what on earth the automotive industry is going to look like this time next year.

Please click here to launch the gallery of cars. 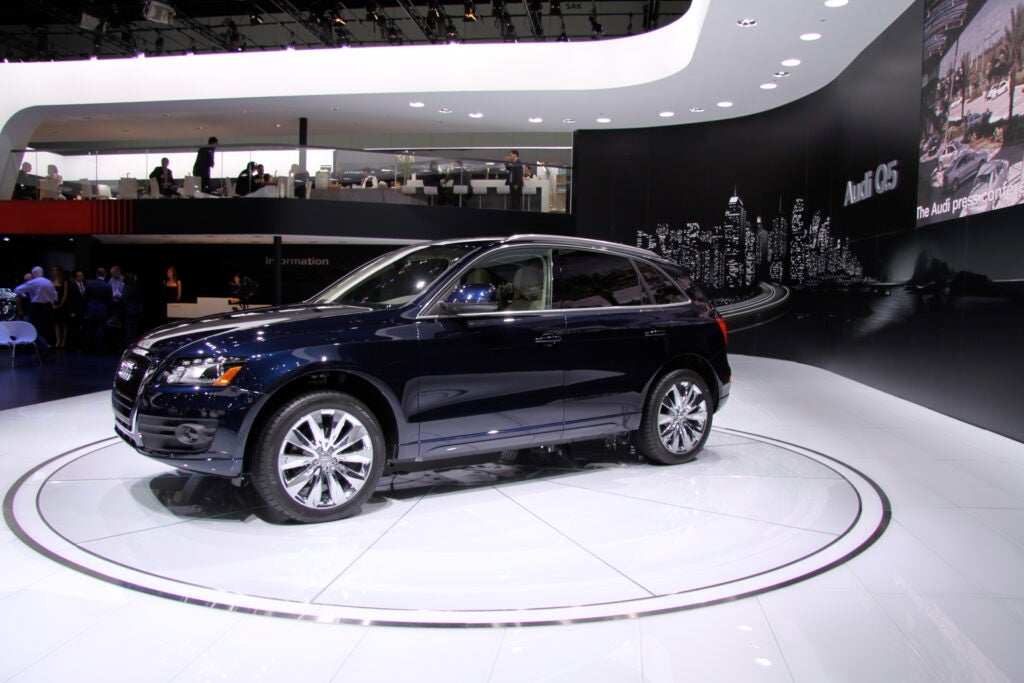 With the 2009 Q5, Audi gets into the crossover market with a compact, sporty SUV based on the same platform as the superb A4. 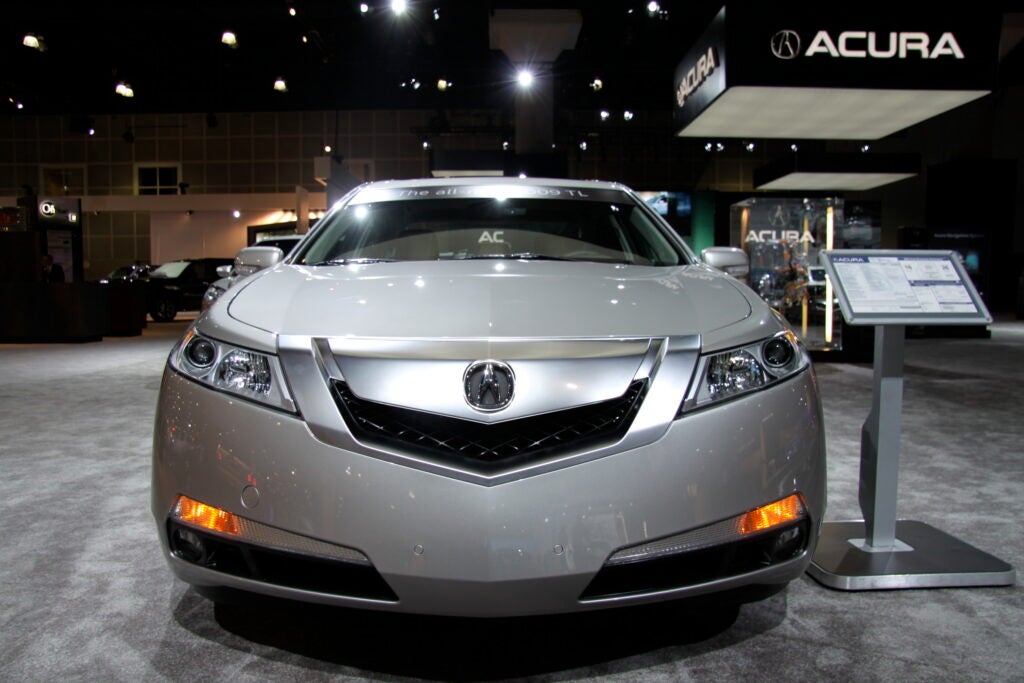 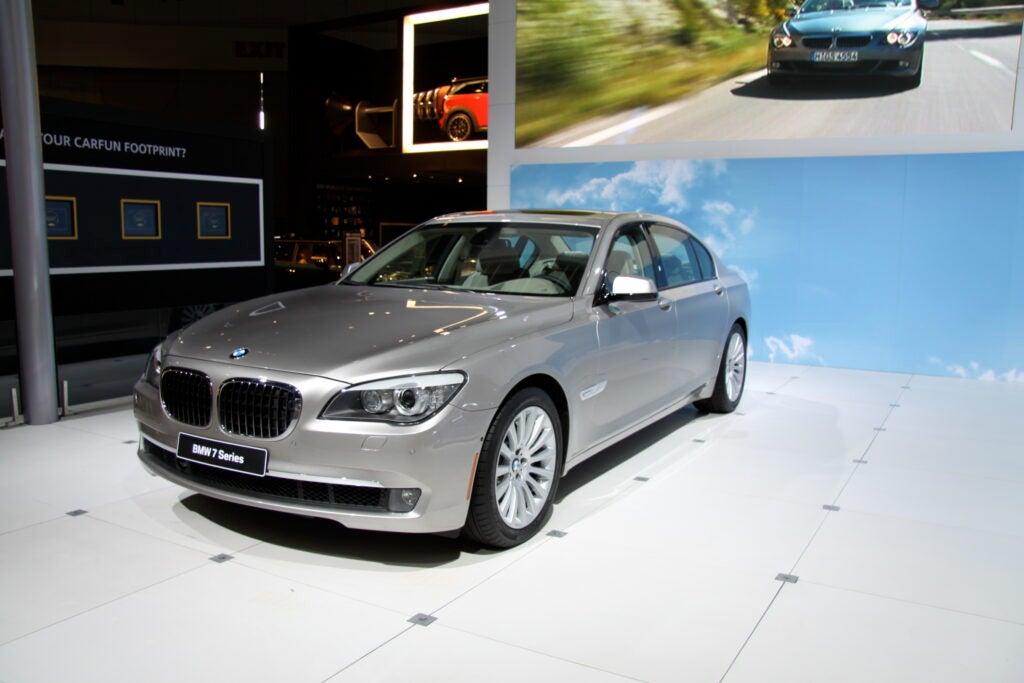 The fifth generation of BMW’s longest, most luxurious chauffeur-mobile arrives. 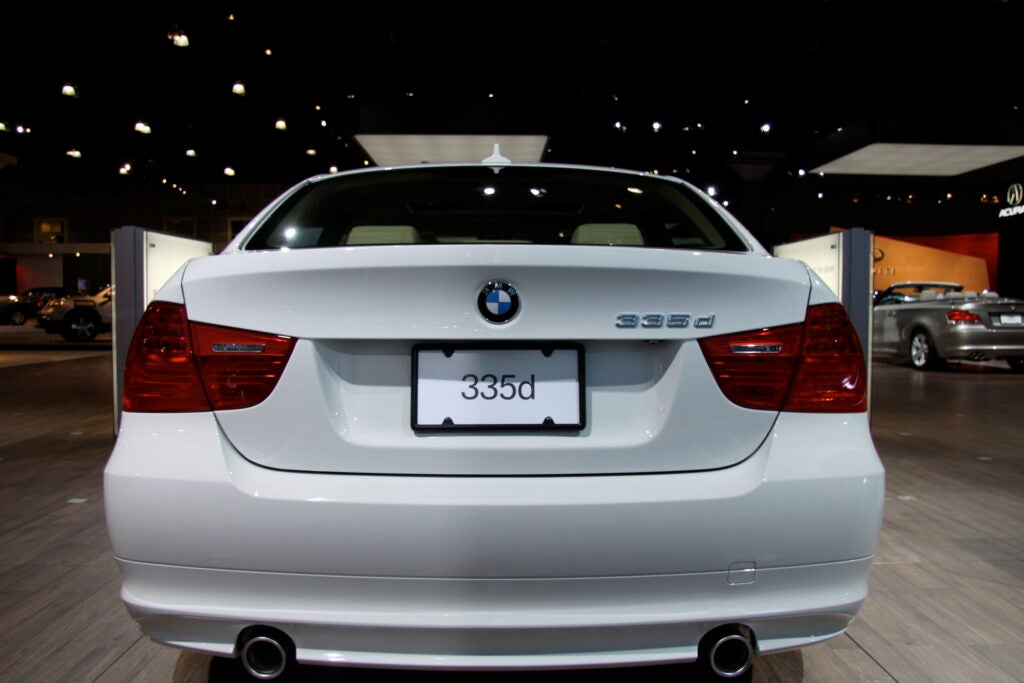 Like every German automaker, BMW has been talking big about the efficient, powerful wonders of diesel for some time. Now they’ve put a turbodiesel engine into one of the best cars on the road, the 335i. 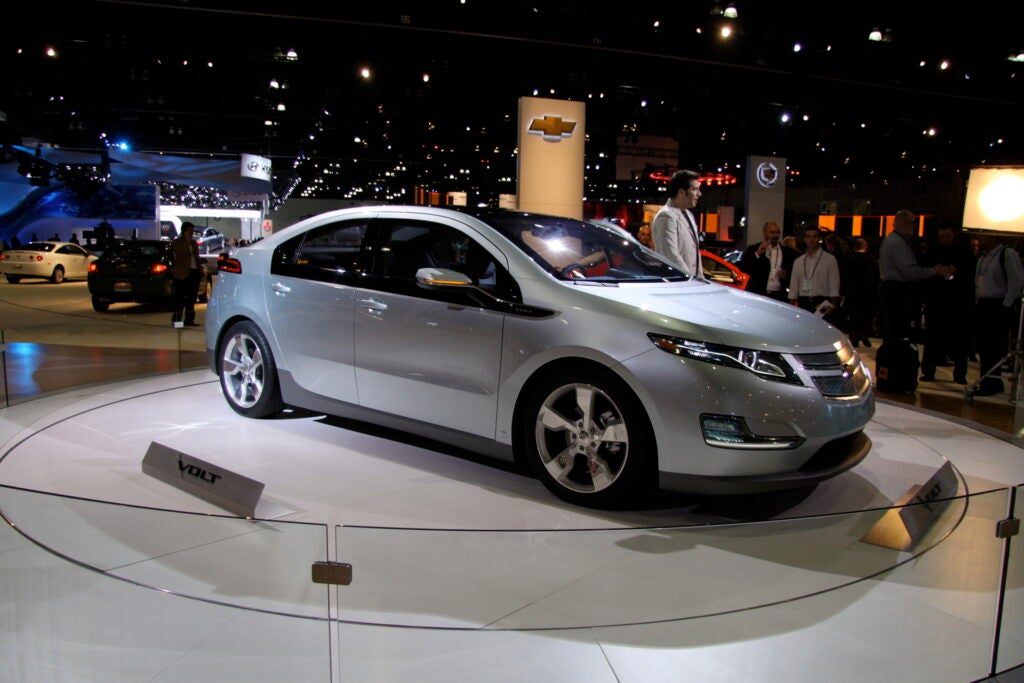 The Chevy Volt is GM’s great lithium ion-powered hope, an extended-range electric car that will run 40 miles without using a drop of gas before switching over to a small, conventional backup engine. The Volt will arrive in November 2010, if GM still exists by then. For a detailed account of the race to build the Volt’s battery, see my piece from our November issue here. 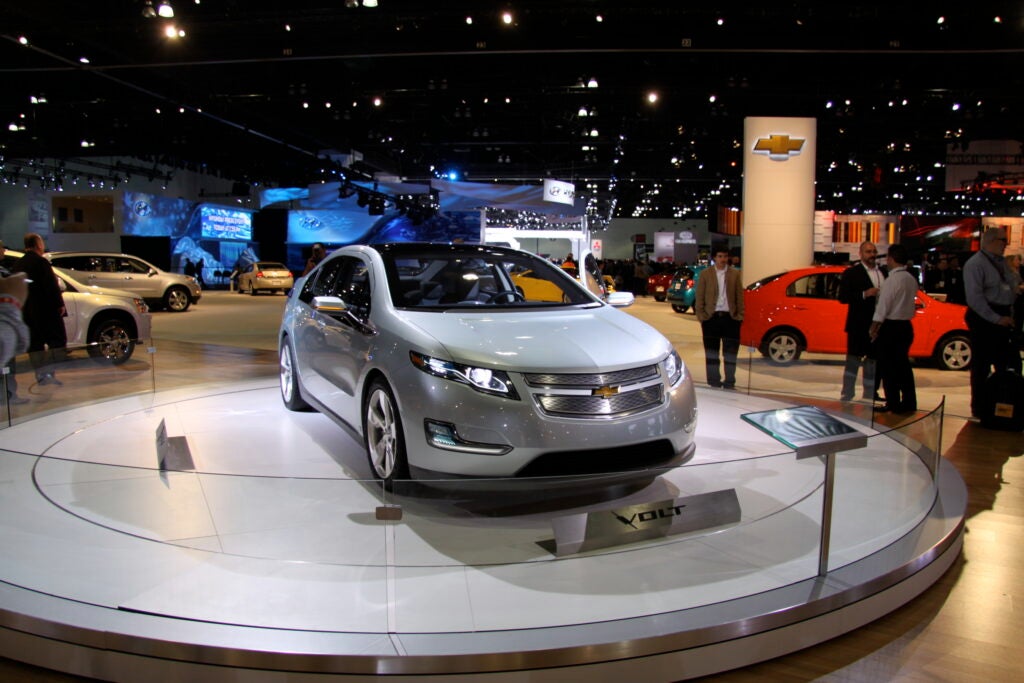 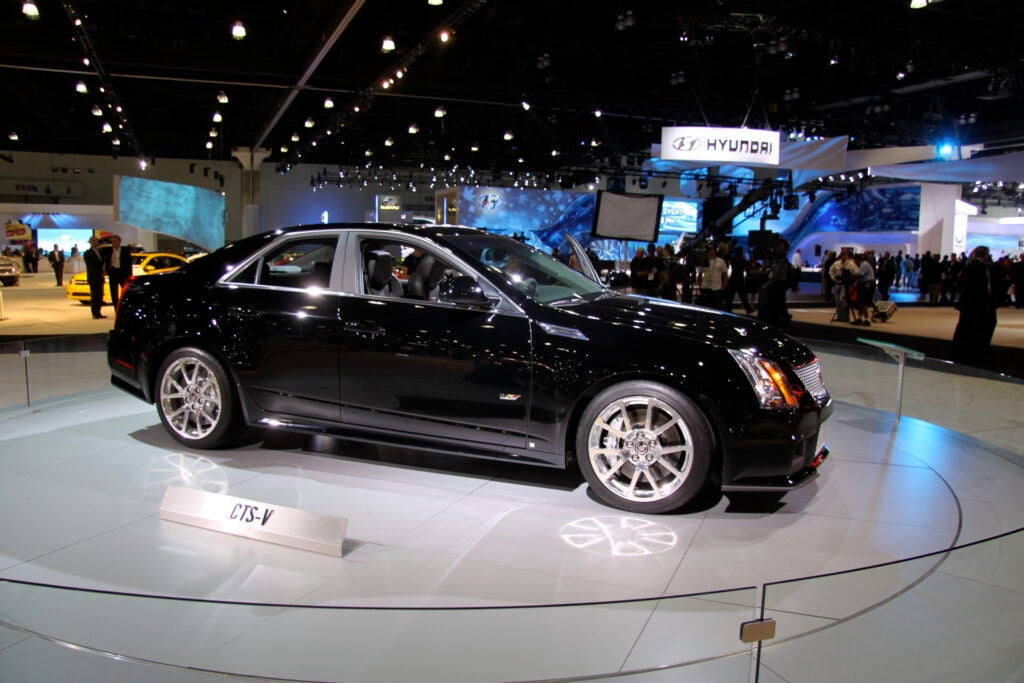 At least judging by Nurburgring times, Cadillac’s CTS-V is the fastest production V-8 sedan in the world. It’ll also run from zero to sixty in 3.9 seconds—hellaciously fast for a car this big. 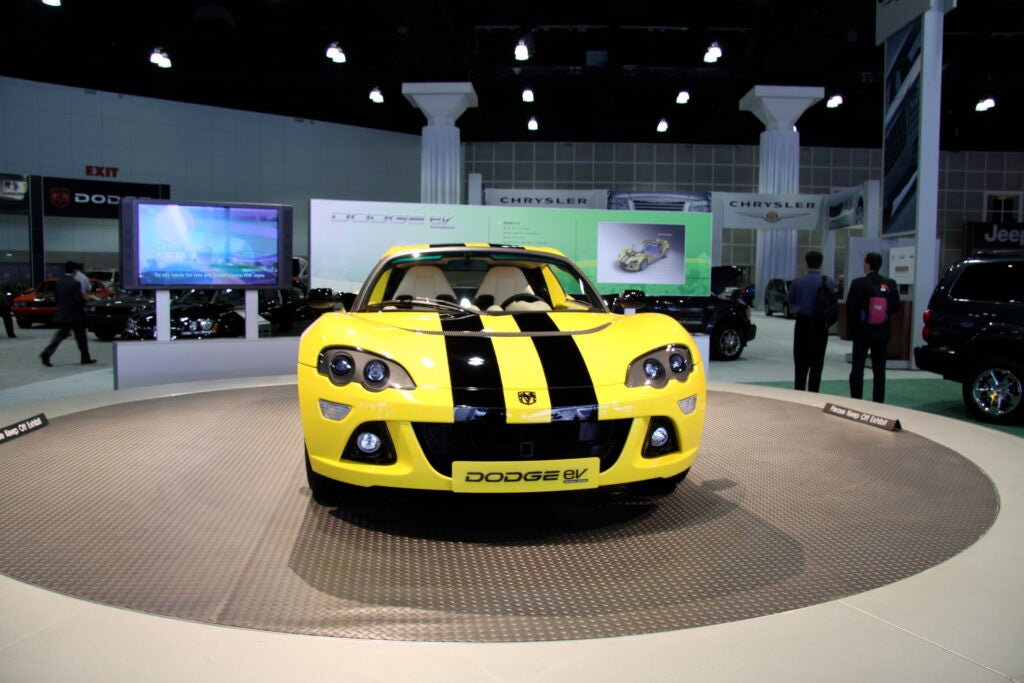 This one gets the usual Detroit caveats, but if Chrysler can be saved, it intends to put this all-electric sports car on the road in late 2010.

Probably the most attractive exotic car on the floor was Ferrari’s California, a brand-new V-8 powered hardtop convertible whose image will soon decorate the bedroom walls of teenagers everywhere. 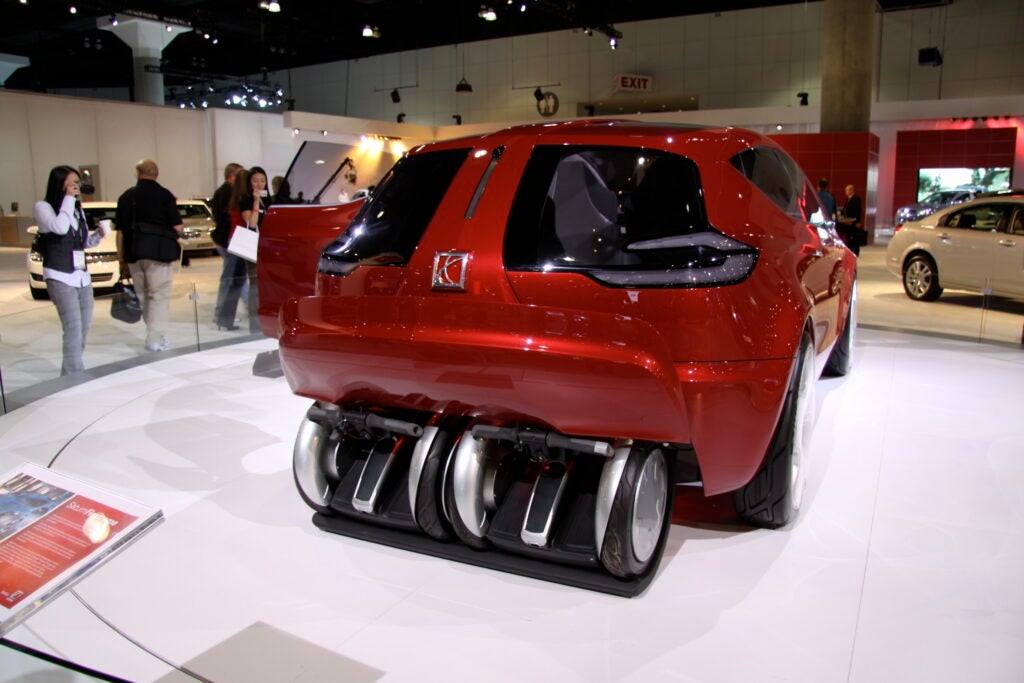 As I stood and puzzled over bizarre rear end of the Saturn Flextreme concept car, which would in theory run on the same extended-range electric powertrain as the Chevy Volt, a guy standing next to me said what everyone was thinking: “It looks like it’s giving birth.” To Segways, that is. 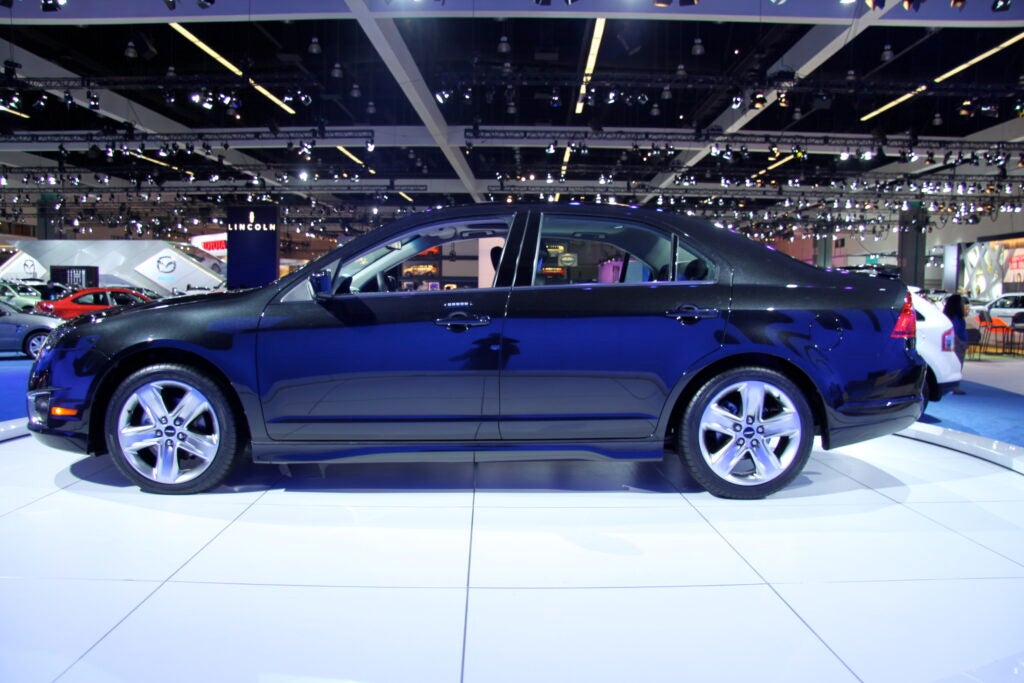 The new Ford Fusion comes with three different powertrains, including an impressively efficient hybrid (39 mpg in the city) that can go up to 47 mph under electric power alone. 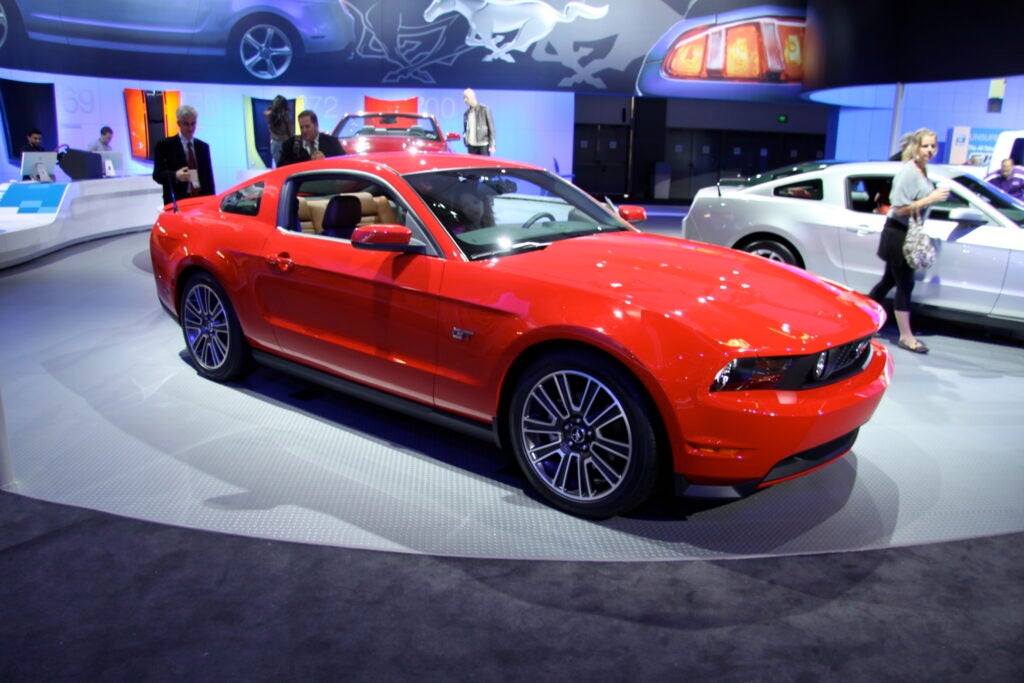 Apparently more than 1,000 people showed up to a party the evening before the opening of the LA show to get an early look at the latest iteration of Ford’s iconic muscle car. 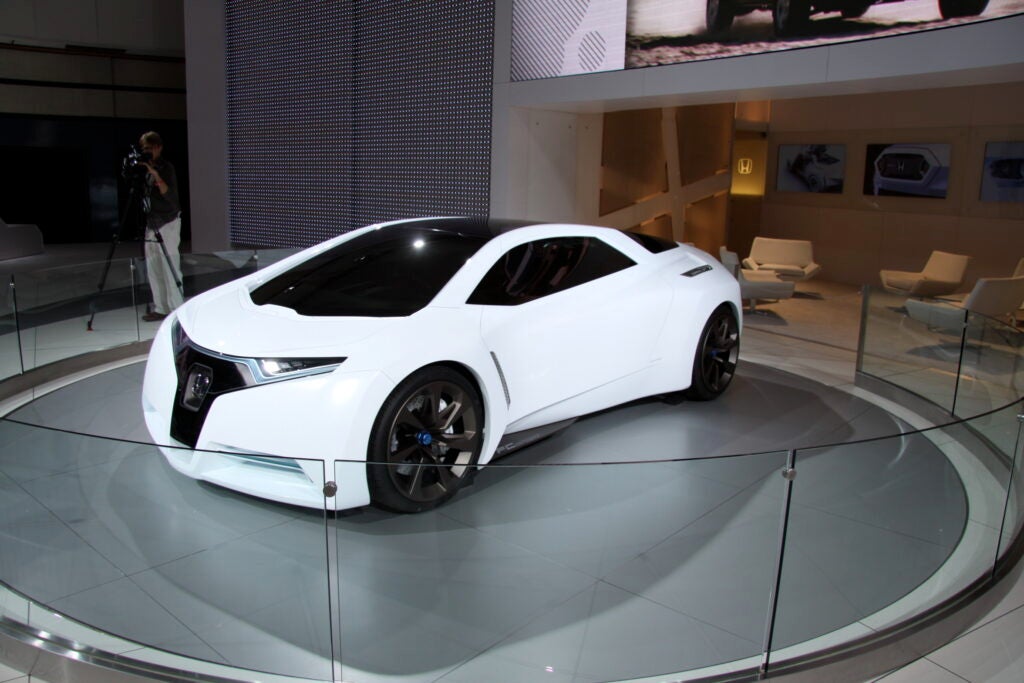 The most conceptual concept at the show was Honda’s FC sport, an exercise designed to see how far you can push the basic idea underlying Honda’s hydrogen fuel-cell powered FCX Clarity. 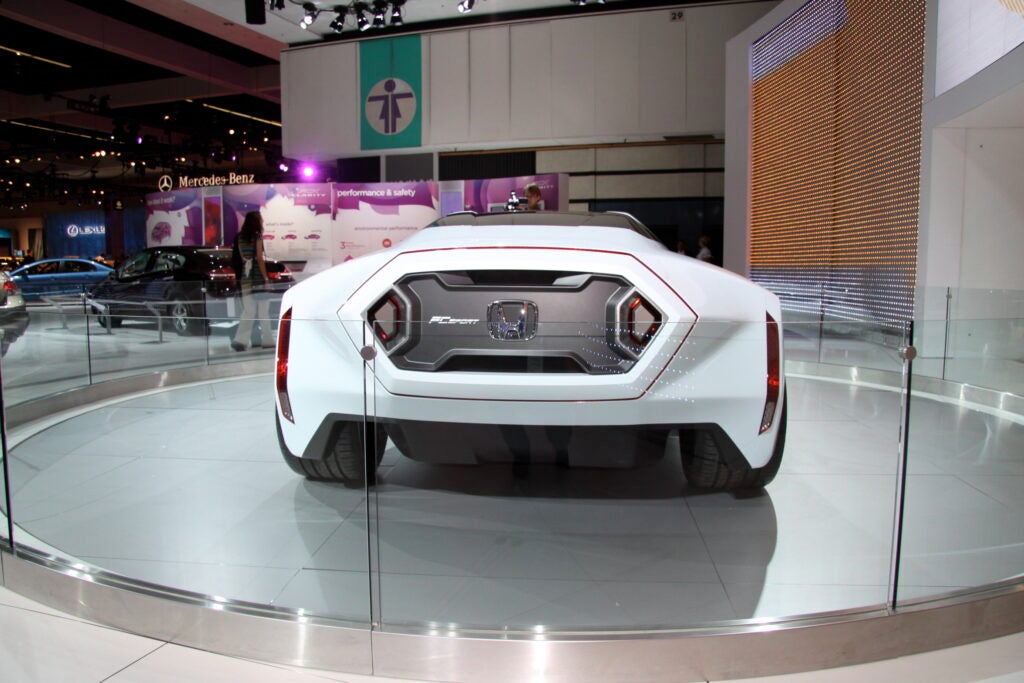 That hatch in the back hides two hydrogen tanks. The driver sits in the center position, and two more passengers can fit in the back seat. 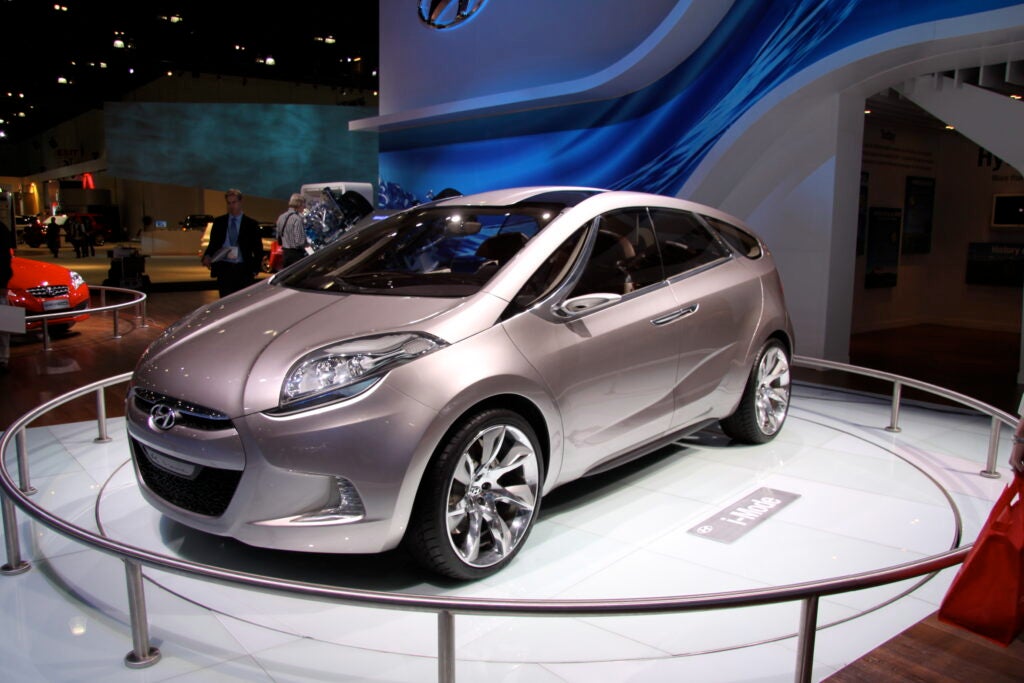 This concept puts Hyundai’s ambition on full display. The car runs on a turbocharged diesel engine, and the body is made of a variety of next-generation materials designed to cut weight and boost efficiency. Inside are three rows of seats, and the passenger seat swivels to face the second row. 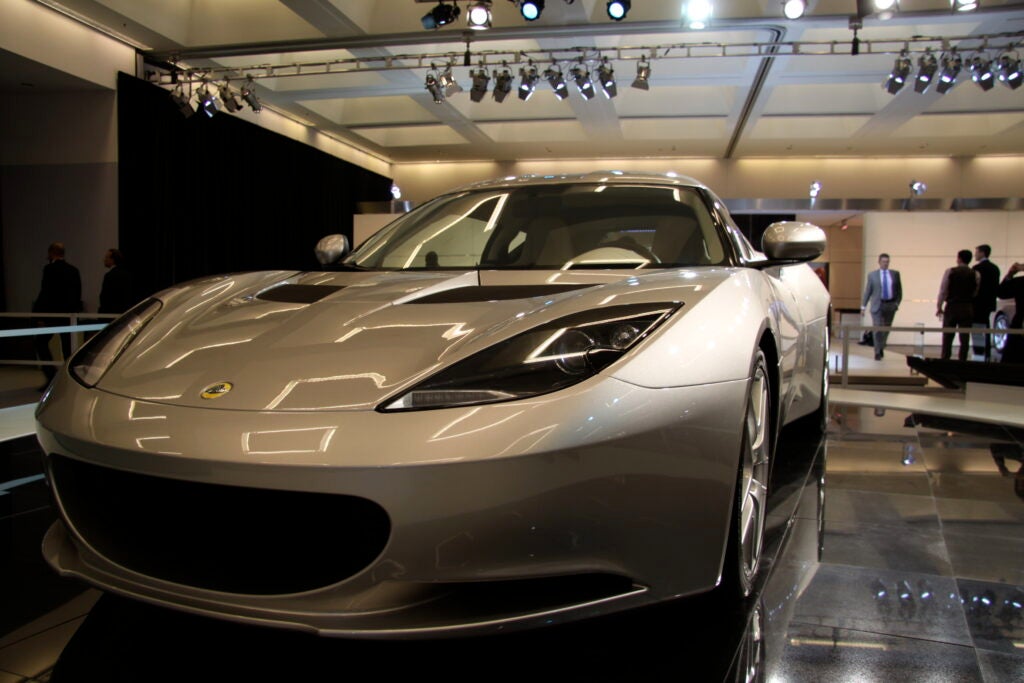 Another of the prettiest faces at the LA show was the new Lotus Evora, a V-6 powered, mid-engined sports car. The Evora is the first all-new car Lotus has released in 13 years, since the launch of the Elise. 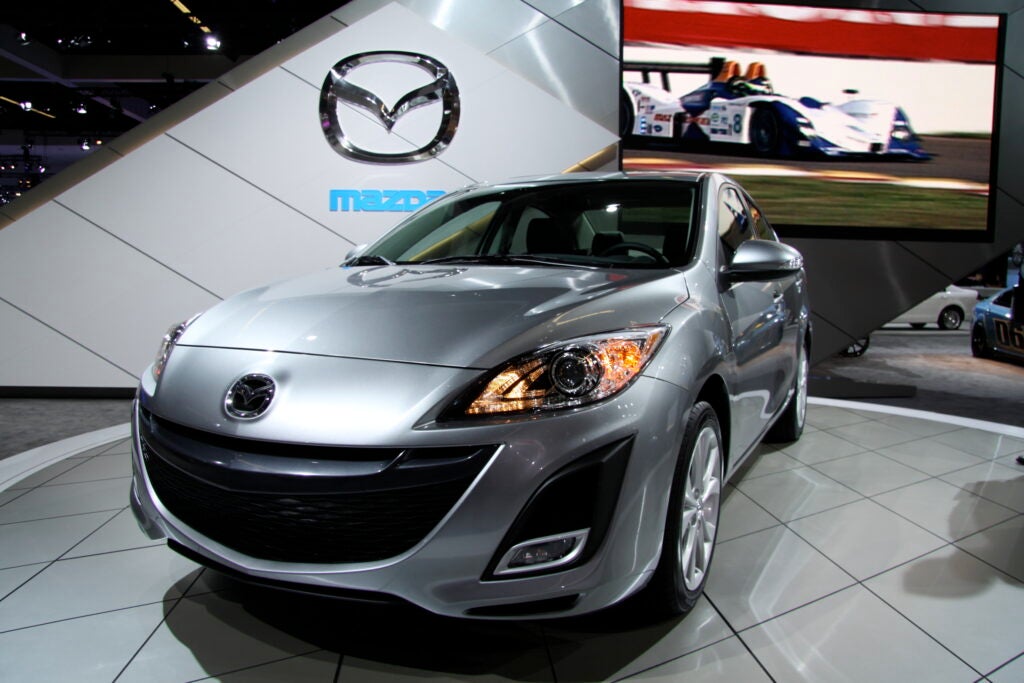 When Mazda first started showing off the hallucinogenic Furai, a colleague wondered aloud, will those styling cues make it into production cars anytime soon? To me, the bold front end of the new Mazda 3 answers that question: Yes, and it looks pretty cool. Some have said that the new Mazda 3 looks clunky, but to my eye it was one of the most attractive actual, affordable, normal-person production cars at the LA show. 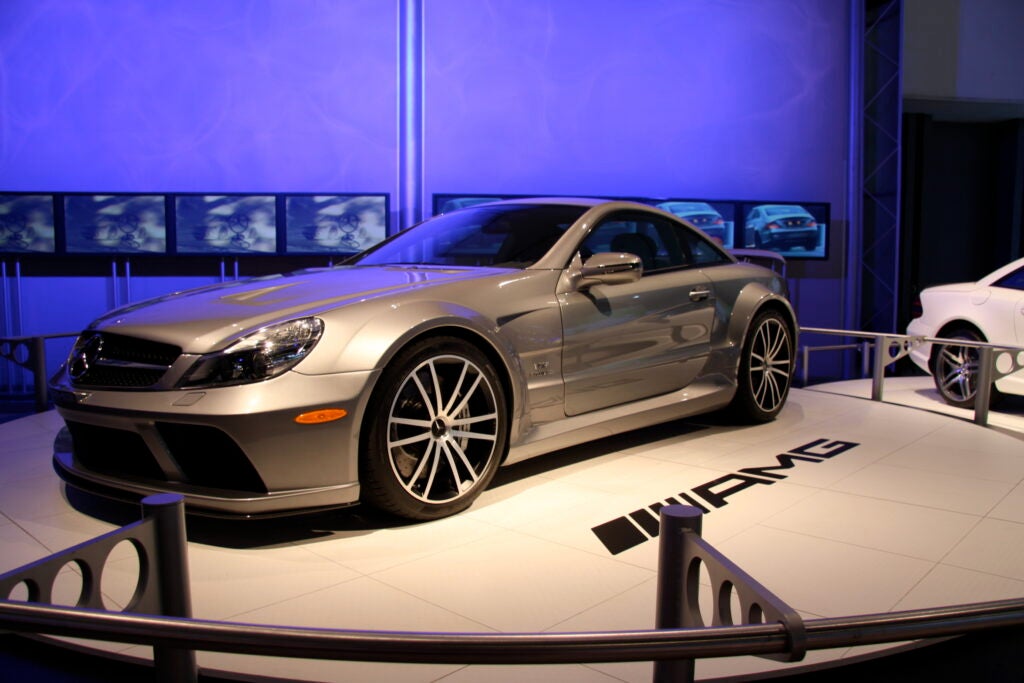 The Mercedes SL65 AMG Black, on the other hand, was one of the most attractive unaffordable, outrageously exclusive cars at the LA show. With a 6.0-liter bi-turbo V-12 engine that makes 661 hp, and a 0-60 time of 3.4 seconds and top speed of 199 mph, this newest Benz performance car is all about utterly ridiculous power and speed. 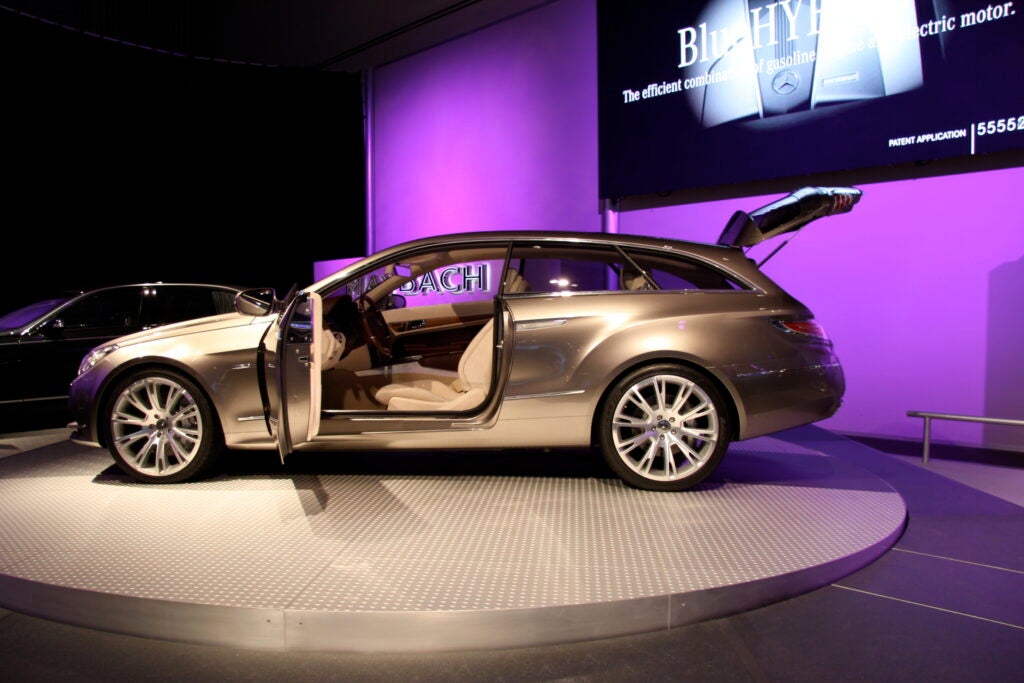 The new Mercedes Benz E-class will be revealed in January at the North American International Auto Show in Detroit, but if you want some hints as to what it might look like, take a look at the front end of this design study, the Concept Fascination. 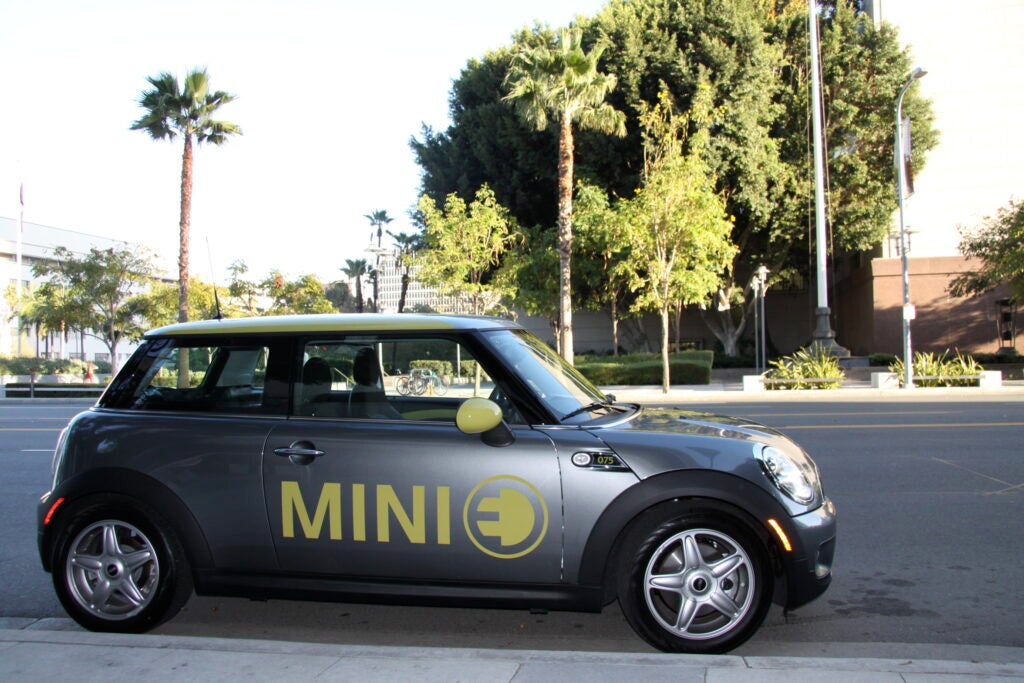 Four hundred and fifty lucky, dogged NYC and LA-based applicants who have $850 a month to spend on a car will get to lease the electric Mini, a lithium-ion powered pure-electric car with a top speed of 95 mph. See our test drive of the Mini E here 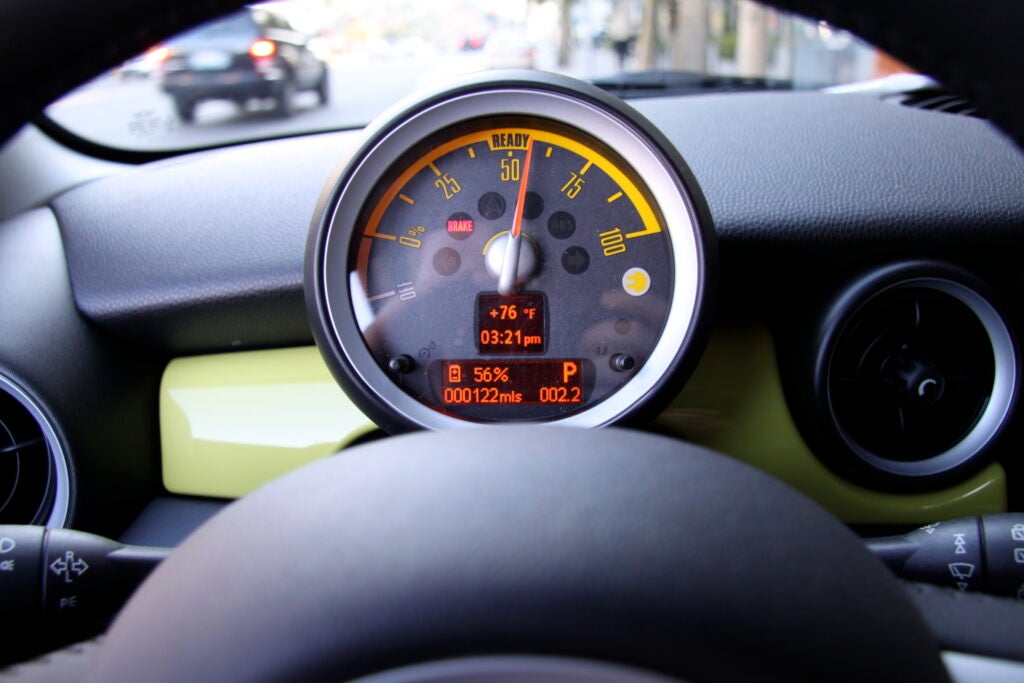 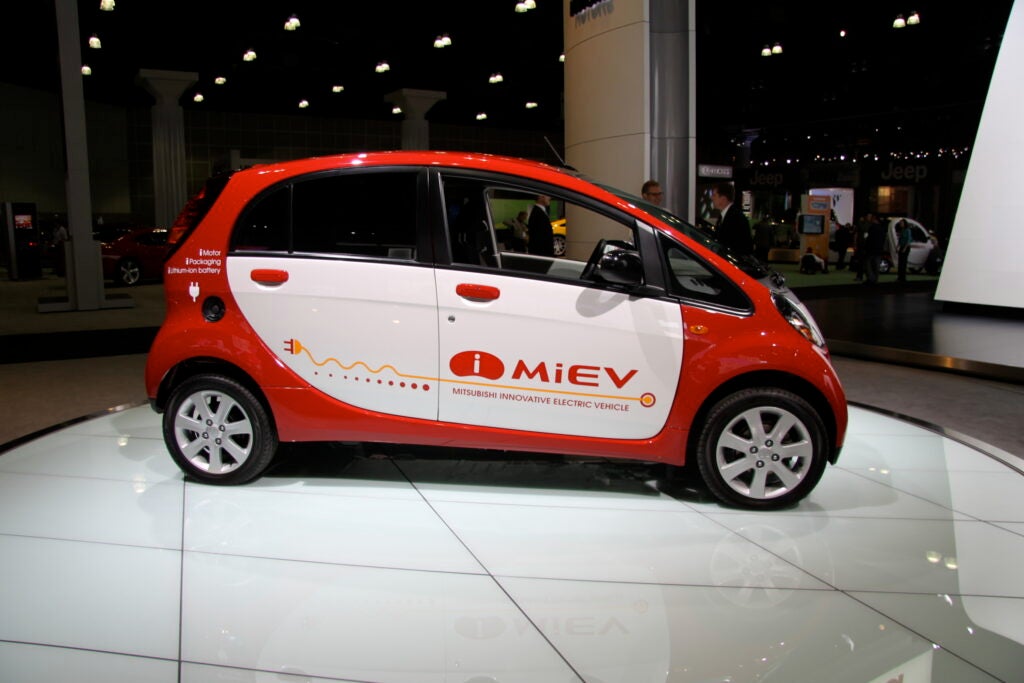 To go on sale in Japan next year, Mitsubishi’s all-electric iMiev features four seats, a cargo area in back, and a lithium-ion battery compact enough to make those amenities possible. In a brief test drive at the LA show, the iMiev felt a little more dialed in than the electric Mini—the regenerative braking system was imperceptible, while on the Mini E it was a little grabby and jerky—but less powerful. It’s unclear whether or when the iMiev would go on sale in the U.S. 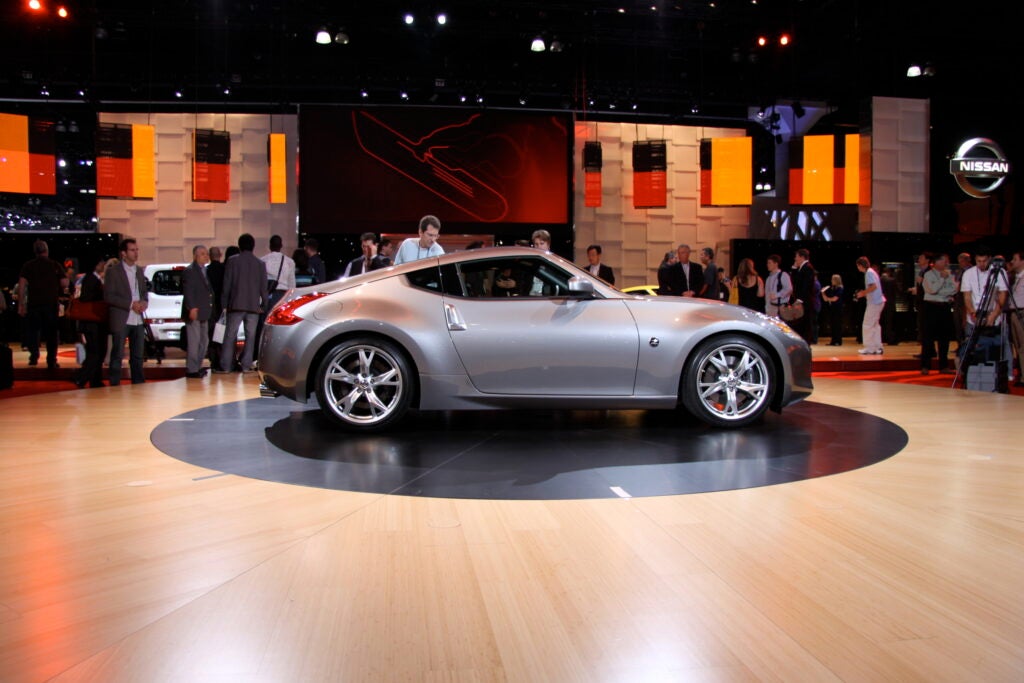 The new Z, completely redesigned for the first time since 2003, is shorter and sleeker than its predecessor—check out that distinctive rear roofline. It’ll run on a 332hp 3.7 liter V6 engine mated to a new 7 speed automatic transmission. 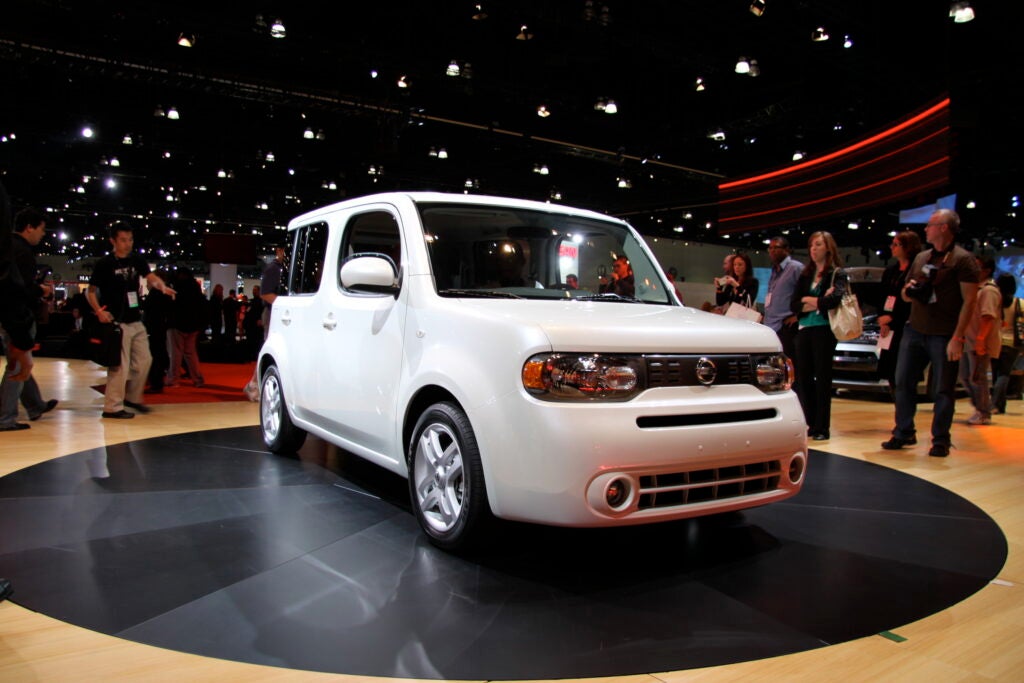 Is it cute? Is it ugly? Is it funny looking? Is it repellent? I haven’t made up my mind about the Cube’s ultra-boxy, clownishly awkward styling, but there’s no question it will draw stares and plenty of admirers when it goes on sale here next year. 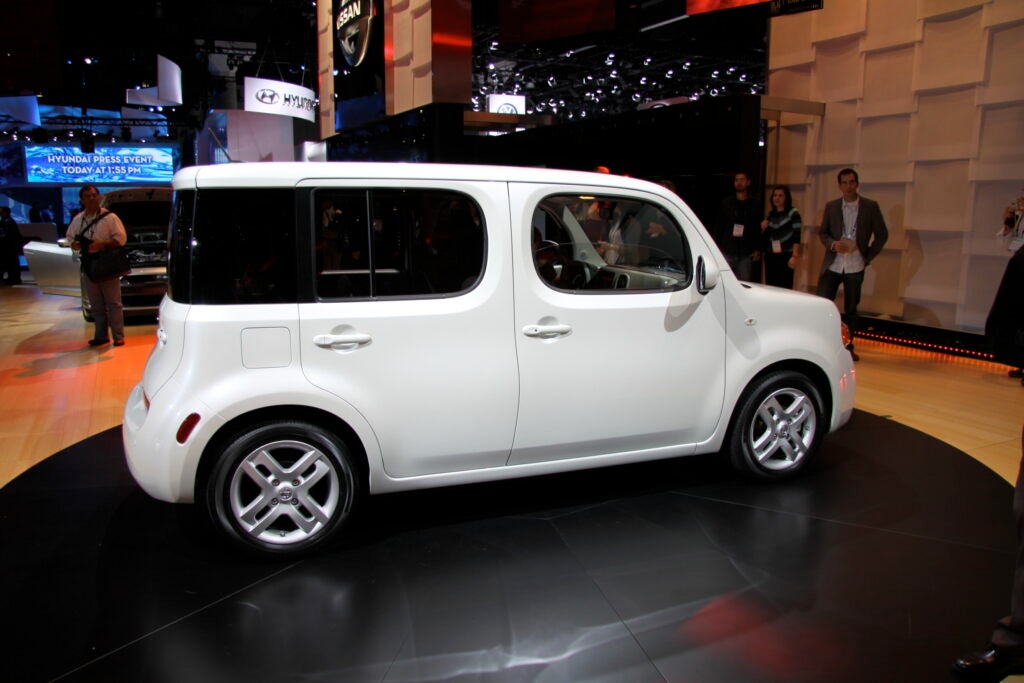 The Cube will be front-wheel drive and run on a 122hp, 1.8 liter four-cylinder engine. Nissan says it should get better than 30 mpg on the highway with the continuously variable automatic transmission. 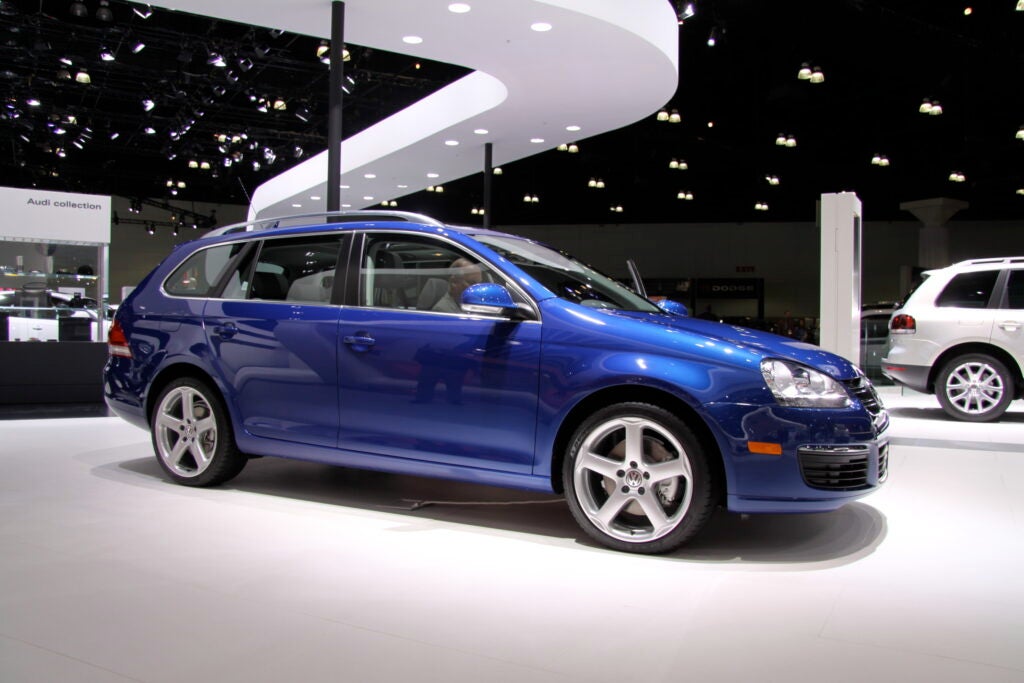 This year’s Green Car of the Year is the diesel-powered Volksage Jetta TDI, seen here in station wagon form (TDI is also available in the Jetta sedan). 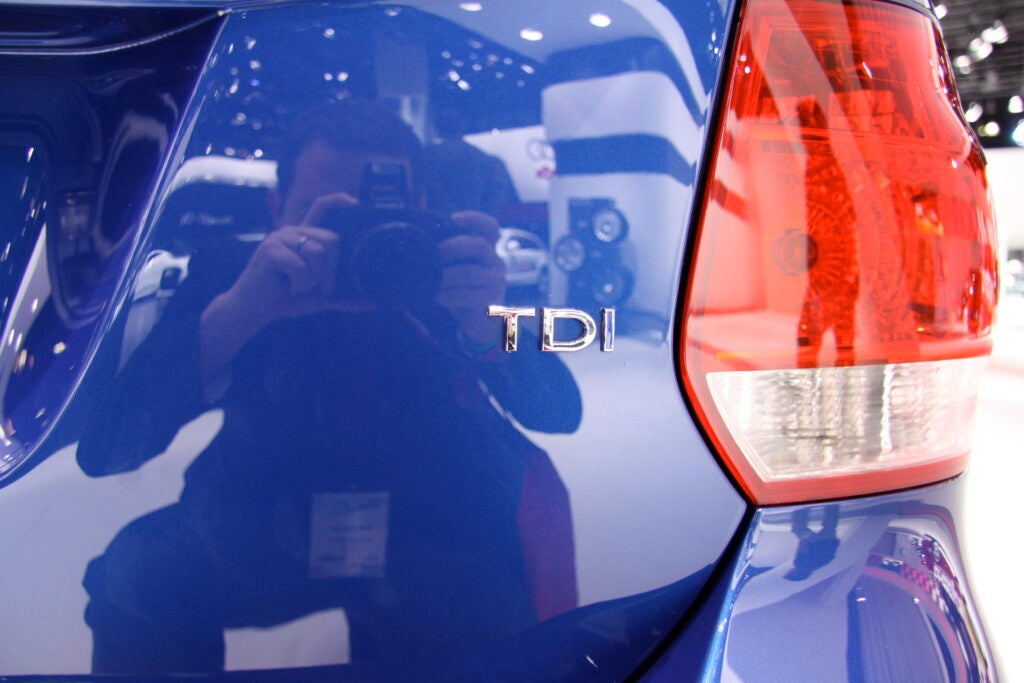 Its 41mpg highway rating was enough for the German import to beat the other finalists for the award—the BMW 335tdi, the Ford Fusion hybrid, the Smart ForTwo, and the Saturn two-mode-hybrid.
bmw
Cars
detroit
gm
Mazda