Safe At Every Speed

A European research project aims for the "uncrashable" car 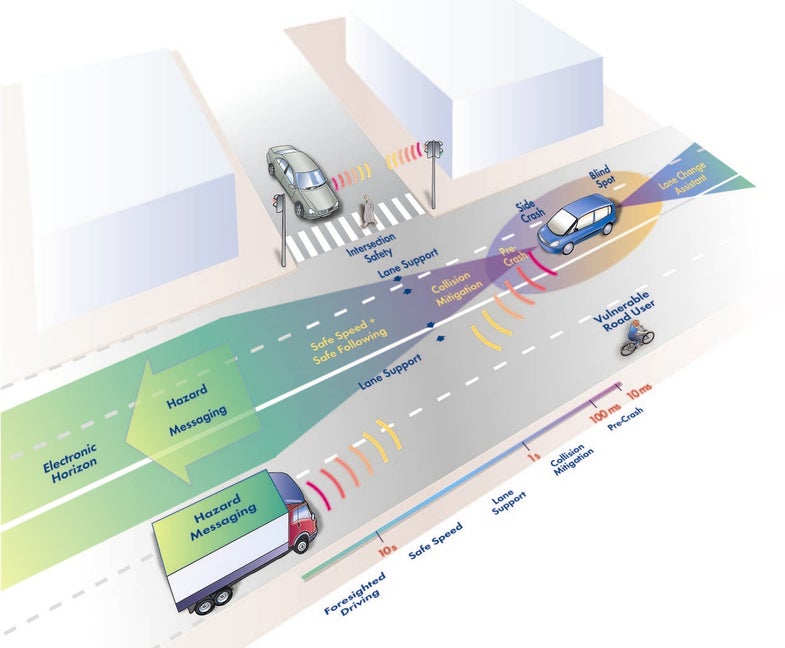 Transport a 2008 Toyota Camry back to the “Car of Tomorrow” exhibit at the 1964 World’s Fair and they’d never buy the hype. “Seven airbags?” they’d say, “And no jet pack? Yeah, sure.” Those were the days before Ralph Nader penned his auto-safety call to arms, “Unsafe at Any Speed,” putting auto safety on regulators’ and engineers’ short lists for the next several decades. And it’s far from over: A massive road-safety research initiative in Europe is aiming for a technological framework within which cars would be entirely smash-proof.

The €50 million study, dubbed PReVENT, falls under the European Union’s umbrella program for a collection of safety initiatives. Each one focuses on a separate technical direction, and each has a handle straight from some 1970s-era, sci-fi corporate bureaucracy:

WILLWARN: Uses wireless communications to interact with other vehicles to warn of impending roadway situations ahead

LATERALSAFE: Researches the use of active sensors to eliminate vehicle blind spots

APALACI: Protects pedestrians and cyclists by tracking their trajectories in real time

COMPOSE: Takes control of the vehicle, applying the brakes if a pedestrian steps onto the road. Also includes other reactive tech, including extending the bumper to enhance crash worthiness

The latter two projects involve the use of predictive technologies to detect impending collision with other motorists, pedestrians and cyclists, tracking their speed and paths. If one vehicle suddenly stops, or a person suddenly steps onto the road, a car equipped with these technologies would calculate the implications and react accordingly.

The systems are controlled by sophisticated algorithms that track all the elements in a driver’s landscape. The one issue keeping these systems from car makers’ options packages is the massive computing power required to keep track of the various components. It’ll still be a few years until in-car computers are powerful enough to put all these pieces together. Maybe by the next World’s Fair?