The Beckham of Field Hockey?

Bending it like that guy, special shoes, and one very hot training chamber are all part of the making of a modern player

Every four years, we watch. We marvel at badminton and wonder about the modern decathlon. With more than 300 gold medals awarded across 37 disciplines, our lives are suddenly much less productive. To aid in your immersion, we continue with our daily edition of “know your Olympic sport,” by introducing the next David Beckham explaining why field hockey players are always wet.

Dutch defender Taeke Taekema is known for his ability to curve shots off of set plays. He even has his own piece of equipment to help amplify his talents and he’s apparently not bad looking either. Bend it like Beckham? How about twist it like Taekema.

The legend of Taekema was cemented following the European Championship in 2007 where he scored 16 goals in the tournament (apparently that’s good). Taekema’s skills are centered on his ability with penalty corners. Similar to a soccer free kick, a special shot known as the “drag flick” has revolutionized the game in just the past 15 years. And like pulling a wrister in ice hockey, the player drags the stick along the permanently wet ground (more on that below) allowing him to either lift the ball or sling it along the ground. In a quasi jai-alai move, the ball rolls up the stick and then back down again adding more speed. Taekema trained and learned from fellow Dutchman Taco van den Honert (can’t make that up) who first introduced the shot to the outdoor game. In short, Taekema can flick with the best of them.

Beckham could bend before his Adidas Predator boot and Taekema doesn’t need his Adidas TT-10 stick to flick—but apparently it doesn’t hurt. The TT-10 is a carbon fiber stick designed with a more extreme curve and lower blade profile than traditional sticks making it ideal for flicks (though less desirable for other skills). With the advent of flicks, the governing bodies have even begun to limit the amount of curvature allowed in the equipment

Like Beckham’s boot, the TT-10 is available for any field hockey player but with his initials and number creating the name, expect his peers to pass. 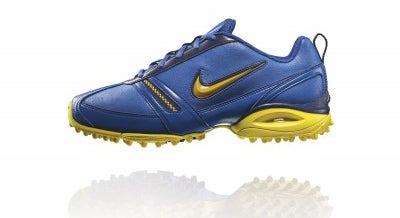 Now that you’re hooked into field hockey, let’s step through some of the basics of the sport.

The Game: The men first sent teams to the Olympics in 1908 and women joined in 1980. In Beijing, only the US women will be represented. Two thirty-minute halves are played between teams fielding 11 players per side (including the goalkeeper). Goals can only be scored from inside the 16-yard semicircle.

The Field: Anybody notice the water in the Taekema video above? While the slow motion was a weak attempt at Hollywood, the water splashing is actually a standard part of the game. Since 1976 the game has been played on artificial turf (100 yards by 60 yards) that is intentionally watered down before competition to keep the ball lower and slow down the game for fear of injuries.

The Stick: Sticks often weigh somewhere between 18 oz and 26 oz and range in length between 26 and 38 inches. Forwards tend toward a lighter stick while defenders grab something heavier.

The Ball: A bit larger than a baseball, field hockey balls are solid plastic weighing between 5 ½ ounces and 5 ¾ ounces. They can be fired in excess of 75 mph at elite levels.

Don’t think all the fancy sports science is reserved for Michael Phelps. The women’s field hockey team utilized its own unique, perhaps homegrown, training techniques to prepare for the Beijing heat.

With training headquarters in San Diego, the field hockey program knew the monotony of 74 degrees in southern California wouldn’t prepare the team for 92 in Beijing. In an attempt acclimatize its athletes, a team of physiologists, nutritionists and medical personnel built an oversize heat chamber for their athletes to train in. The “chamber” consisted of a 20-foot by 30-foot rental tent, three big misting machines and an industrial size propane heater. A bit crude perhaps, but effective nonetheless.

“We saw them adapt with a lower heart rate and rate of perceived exertion,” said Strength and Conditioning Coordinator Steve Bamel. “They’ve asked the girls how they feel in Beijing and they say they feel prepared. I think mentally as well, they feel like we prepared them for the worst case scenario”

The acclimatizing was conducted every other day for a total of eight sessions in the period leading up to the Olympics. According to Bamel, the scientific literature suggests that acclimatizing to heat can easily be achieved in that period of time. The chamber was set to around 94 degrees and 90 percent humidity while the 24 girls completed a series of exercises over 48 minutes (light lifting, bicycle, abs, etc.). The size of the tent limited any field hockey specific exercising (though archers did use the tent for practice). Heart rate, sweat rate and a series of other metrics were tracked throughout the sessions. A control session in more moderate climate was used as a baseline. With each session, the girls inched closer towards their original baseline suggesting the glorified tent did its job.

If you’re familiar with this series, you won’t be surprised to learn that Nike has a special shoe for field hockey. The Team Destroyer FH is first and foremost waterproof. The exact turf used in Beijing was tested to design a hard cleated rubber to maintain traction in the intentionally soaked conditions. The turf in Beijing is shorter and denser that other surfaces using a low sliding resistance microfiber yarn with a built in shock layer. Nike tested four designs before finalizing the Destroyer design.