Bend It: The Science of Gymnastics 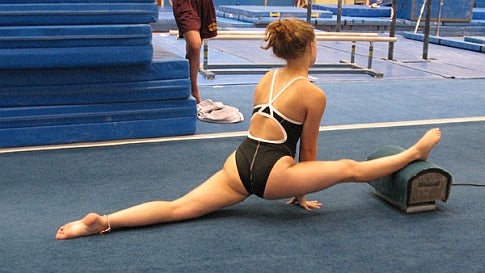 Every four years, we watch. We marvel at badminton and wonder about the modern decathlon. With more than 300 gold medals awarded across 37 disciplines, our lives are suddenly much less productive. To aid in your immersion, we continue with our daily edition of “know your Olympic sport,” with more than you need to know about gymnastics.

Inside we’ll provide a trick to help you finally touch your toes, expose a fault in major equipment and challenge our readers to win back a gold for America.

Apparently a simple split is not enough. With degrees of flexibility correlating with tenths of points, US gymnasts will try any form of Voodoo to get that limb just millimeters higher. Well aware of the value of an extra degree the ears of Dr. Bill Sands, leader of the Recovery Center for the USOC, perked up 15 years ago when he read research citing 100 percent improvements in flexibility in male physical education students.

“In a lot of sports, just making the shape is part of doing well. The elegance of the position itself is what’s pursued,” said Sands “The higher you can hold the leg, the better.”

The source of the absurd improvement relied less on Voodoo than it did on vibration. Research had shown that resting a limb on a vibrating surface during stretching greatly increased the flexibility of that limb. Sands searched the literature but was surprised to find no attempts to repeat the data and capitalize on the potential advantage. Armed with $1,000, a local machine shop and an engineering intern Sands decided to make his own vibration box. The machine itself is surprisingly simple. It’s shaped like a small pommel horse and shakes continuously at 30 hertz. After trials with young male gymnasts showed 400 percent improvements acutely and significant increases at four weeks, Sands felt the device was ready for Olympic prime time. Three years later, with a series of peer-reviewed publications, Sands says the effect of the machine is indisputable.

“As a physiologist I’m struggling to find improvements of one percent and so when you can find improvements of 20 -100 percent, that’s big time,” said Sands. “The results have been staggering, not just small. It’s to the point where we stopped studying it because we know it works. It’s by far the biggest results in experiments that I’ve ever done”

To date Sands has worked with gymnasts, synchronized swimmers, divers and even figure skaters with universal results. The synchronized team like the contraption so much, they reversed engineered it and ordered one for each athlete to take home. The only problem Sands has is finding the right protocol. Apparently they all work. In different studies he’s altered the time on and off the machine and found positive results irrespective of timing. A welcomed complication, we’re sure.

It’s incredible what you can see at 500 frames per second. Tell someone to jump, and after asking how high, they’ll bend their knees to a point and then explode upwards and off the ground – down, then up. Simple and efficient. So why are the best gymnasts in the world adding an extra ‘down’ and ‘up’ when jumping on the spring floor and vault? The answer, according to Sands, lies in the floor.

In live footage, one might watch a gymnast on a spring floor and believe they jump just like we do (plus all those twisty things). But after a rash of injuries following the 2003 world championships held in the in the States, the USOC wanted to take a look at their equipment and ensure it wasn’t causing problems.

Sands decided to take high-speed footage [below] of the athletes and the equipment in action. What he found suggested a larger potential equipment fault. Clicking frame by frame through the footage, Sands saw an unexpected, ever so slight, extra down/up in the athletes’ mechanics before launching. Even the gymnasts didn’t know they were adding the inefficient motion. When Sands focused his attention on the spring floor itself, he found an answer to the conundrum. According the Sands, the floor is tuned incorrectly resulting in a rattling that caused the extra hiccup in the gymnast motion.

“Why they would want to bend twice I’m not sure. To comply with a normal takeoff the floor should go down when you go down and go up when you go up,” said Sands. “On a diving board you can move the fulcrum to make it behave the way you want it. Ideally you get the rhythm so you fall on the board when the board is at least going down. If you fall on it when it’s going up you waste a bunch of energy. What we think we’re seeing in spring boards and vault boards is like diving with a board that’s out of tune.”

Testing conducted on floors includes a dropping a weight on the mat to test the springs. While this provides some data, Sands notes it doesn’t accurately represent an athlete jumping and would never detect the minute problems. Sands has found one solution through lowering the stiffness of the springs, but this has an added, less desirable effect, of forcing the gymnasts to go longer on their somersault passes. Combined spring/foam floors could offer some opportunity for improvement but further research is necessary. Linking the issue to injuries or performance is premature at this point, but Sands knows the current situation is not optimal.

“It’s not only inefficient, but you’re going to put a lot of strain on the leg. They have to be staggeringly strong because the apparatus is tuned wrong. The effects on the athletes can only be counteracted by increasing their strength,” said Sands. “It’s a good recipe for rupturing an Achilles tendon” 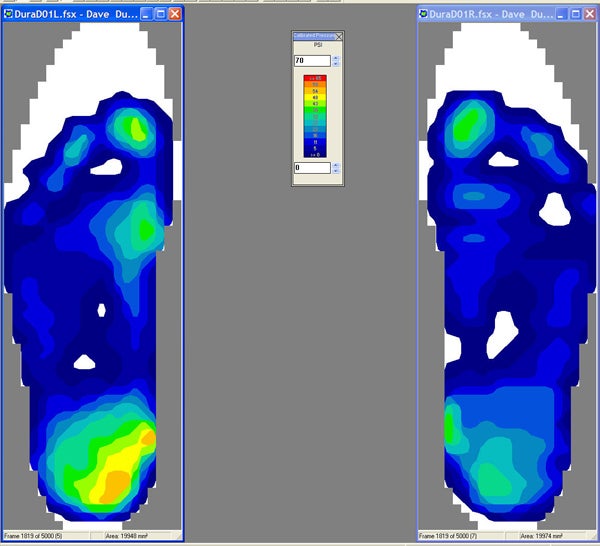 Along with high-speed video, Sands has used Tekscan technology to map out the pressures applied by gymnasts during takeoff. While force plates are great for some applications, beneath a spring floor they’re rendered irrelevant. The Tekscan technology is worn on the foot of the athlete and with more than 1,000 sensors for foot. The result is a continuous color-coded pressure distribution of the footprint. The analysis showed gymnasts often relied on one foot more than the other (often in response to injury) and showed the normal progression during takeoff is toe-heel-toe. The data has been valuable for coaches looking to optimize form. 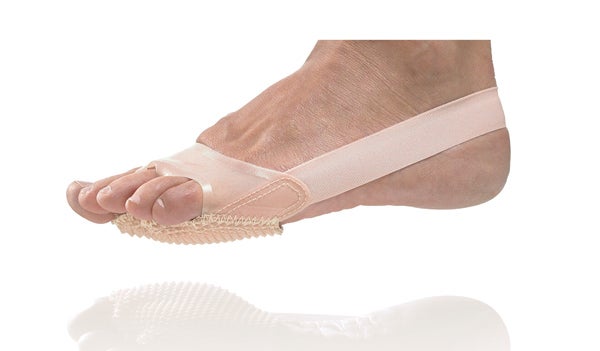 Nike has done it again. For the second time in this series Nike is putting footwear on normally naked feet. The Nike Pidima (Greek for leap) is something between a shoe, sock and slipper designed specifically for the vault. The intent is to add some artificial stick to attempts at sticking the landing. A forefoot rubber pad provides the function while a skin colored single strap around the heel is intended to maintain a minimalist form.

A Youth in Asia

We close with a request of our readers. It’s likely, if not certain, that our women’s gymnastics team was cheated out of gold medals. While scoring will forever remain subjective, your age should not. Rumors before and during the Olympics swirled about female gymnasts on the Chinese national team who were supposed to be 16, thought to be only 14 and looked like they were nine. The Chinese were merely required to show a passport for proof of age— a passport that’s issued by the very authority which benefits from the gymnast inclusion. This isn’t the first time age has been a question on a national and international level. Daniel Almonte will forever be linked to the Little League World Series. Researchers associated with FIFA have looked at using wrist MRIs to verify ages of junior World Cup competitors. So to our readers we pose this challenge: if we can detect a whiff of marijuana by peeing in a cup, can’t we do the same for quantify age? As with our previous challenges, you develop it and we’ll write about it.