The Secrets of Synchronized Swimming

Think it's a sissy sport? Think again. A look at the arduous training, high-tech speakers and super-strong hair paste involved in keeping those swimmers peak 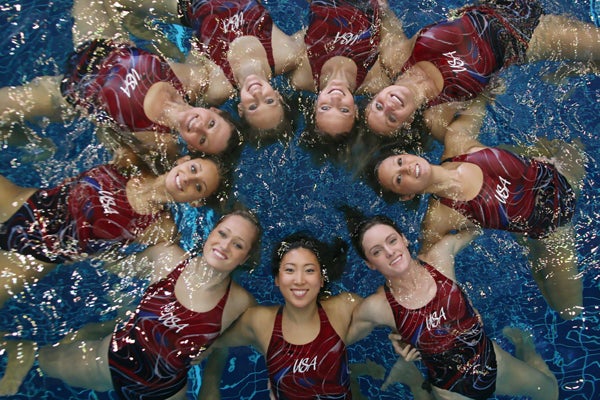 Every four years, we watch. We marvel at badminton and wonder about the modern decathlon. With more than 300 gold medals awarded across 37 disciplines, our lives are suddenly much less productive. To aid in your immersion, we continue with our daily edition of “know your Olympic sport,” by diving into synchronized swimming.

Inside we’ll explain what the sport has in common with the war on terror and why every swimmer worth her hair bun abides by the power of horse cartilage. Go ahead, check it out. Nobody is looking, and we won’t tell.

We’re making the fairly safe assumption that you don’t frequent synchronized swimming meets. So below is a cheat sheet of odd quasi-science facts about the sport. Use them at your own risk. Read through these, we promise to explain the terrorist reference. Come on, you’ve come this far.

• Synchronized performances last four minutes, three of which the swimmers are often underwater. Teams will regularly remain underwater for a full minute during a routine. We remind you that while submersed, they do all sorts of crazy acrobatics we couldn’t do with a trampoline and a bottle of muscle relaxant. They train for this by swimming laps underwater without coming up. Most swimmers can hold their breath for around three minutes and swim 75 meters without grabbing some oxygen. Try that this weekend.

• The secret to the perfect hair that doesn’t seem to move is horse cartilage. Yep, swimmers buy a package of regular Knox (a.k.a. unflavored Jello), mix it with water and then brush it on their hair before competition. The key ingredient in the paste, though, is soft equine cartilage (a main component of Knox) that is apparently quite healthy for the hair. The paste keeps the hair stiff and in place throughout competition. A shower in really hot water is the only way to break loose.

• According the USOC, the synchronized swimming team practices more than any other sport. Between eight and ten hours a day, six days a week. The sport was also the first to pick its Olympic squad, so they’ve been doing this a while.

• The US team has won more Olympic gold medals since the sport’s inception in 1984 than any other country (five, but Russia has four and is gaining fast).

• Christina Jones of the US team is one of three synchronized swimmers in the world who doesn’t wear a nose clip (most even carry a spare in their suit). Jones relies on pressing her lips up against her nose to keep water out and sucks a little more air in when her head is above water.

Speaker of the Pool

What do synchronized swimmers and potential terrorists have in common? It’s not the glitter. To synchronize reverse scoops and barrels beneath the water, swimmers rely on some rather impressive speaker technology. But, when not providing Olympic audio inspiration, that same equipment serves as a first line of defense against potential underwater terrorists. The Speakers in Action

O. E. Enterprise/Oceanears has provided speaker technology to every level of synchronized swimming. From the 1996 Olympics in Atlanta to the current US national team, its piezoelectric speakers have kept swimmers from every country in the world in rhythm. But, when company owner Ed Harper isn’t posing for photos with attractive blondes, he’s speaking with the military about how to notify swimmers that they’ve entered restricted space and, if necessary, stop them dead in the water.

Try talking to someone below the water and you’ll understand the difficulty of underwater sound. The impedance of water is 3,600 times that of air. What little sound is transmitted beneath the water relies more on bone conduction through the middle and inner ear than the traditional route through the eardrum. There’s a 62-decibel offset between sound in the air and that in water. Normal talking is approximately 60 db, meaning communicating at that same relative intensity requires 122 db in the pool. Doesn’t sound that bad till you realize 120 db is somewhere between the noise level created by a jet airliner and that of the threshold for human pain.

But swimmers can’t perform flamingos and cranes in unison if the music is only audible above the water. So, Oceanears technology provides a method for getting the sound out without breaking the bank. Most air based audio speakers rely on a moving coil design that requires a large displacement of air molecules to create noise. According to Harper, moving water that long distance causes problems. Instead, Oceanears speakers rely on piezoelectric technology similar to smaller, above-water tweeters. Voltage applied to ceramic causes much smaller vibrations that are nearly invisible to the naked eye. With water molecules much more tightly packed than those in air, the small displacements can put out much bigger sounds under the water than on ground. 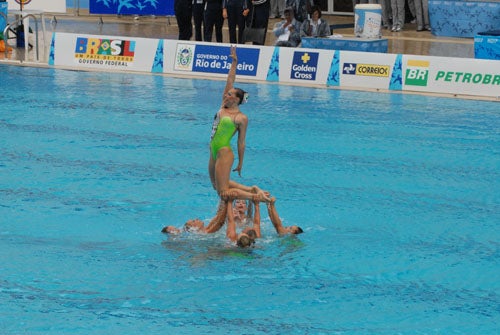 A powerful speaker system is needed for this type of coordination.

According to Harper, the result is that two Oceanears speakers can provide the same sound as 20 moving coil based designs. While Harper outfitted the Atlanta pool with two speakers (one mostly for backup) the Beijing pool using moving coil designs needed ten times that. The basic synchronized package comes with a single 8.5-inch diameter speaker and an audio based unit for the bargain price of $2,500.

But putting out enough sound to keep swimmers happy is the easy part.

“We make speakers used in homeland security, but it’s the same speaker as in synchronized swimming,” said Harper. “We’re talking to scuba divers 400 yards away in the water, for many years that was basically impossible, most communication systems can go to a couple hundred feet.”

The speaker technology is being used in an array as part of the Enhance Underwater Loudhailer (eLoud) being developed in the US. The intent of the system is to be able to talk to submerged scuba divers at long distances before they can get close to a potential target to destroy. That capability is powerful but for its final trick Oceanears is really cranking up the volume. A Enforcer System being developed in the UK using Oceanears arrays is designed to “make any potential terrorist diver get sick and not able to function while underwater and force them to the surface.” This system has been used to protect sites in the Middle East during important GCC conferences. And we thought synchronized swimming was tough.

For more info on acoustics, check out the NOAA’s tutorial

Big thanks to USOC media relations director Taylor Payne for her help.