Why Babies Fake Cry – and Why It Isn’t Fake

Death, taxes, and babies crying – these are things you can rely on. Babies have hunger cries, pain cries, overstimulation... 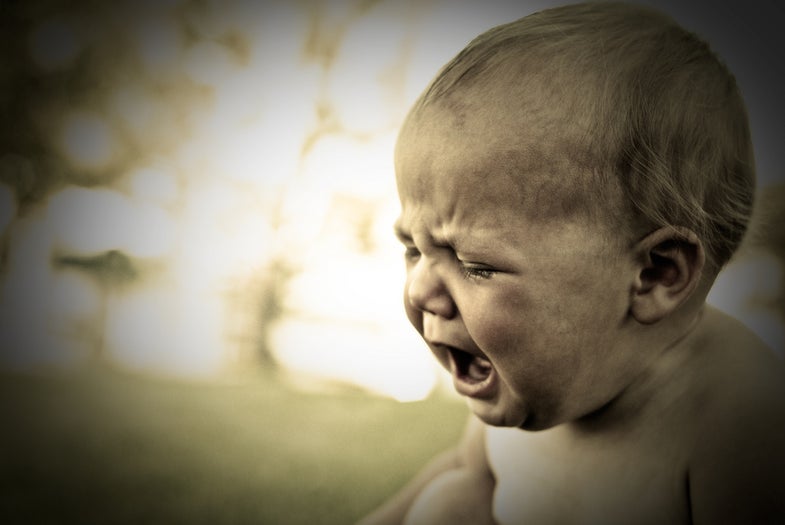 Death, taxes, and babies crying – these are things you can rely on. Babies have hunger cries, pain cries, overstimulation cries, and another amorphous category known as the fake cry – which happens when nothing is actually wrong, but baby is still trying to get attention.

Researchers in Japan captured and analyzed this fake cry over the course of 6 months. The researchers analyzed 102 episodes of crying in two babies, starting when they were 7 and 9 months old. They babies were filmed in their homes for sixty minutes twice a month. The researchers then analyzed the tape, coding it for positive and negative affect – basically, discerning how the baby was acting just before and after the crying session. They looked for downturned lips, grimaces, smiles or laughter.

For one baby, known as Baby M, all of her episodes crying was preceded by negative affect – she was upset before she started the howling. But for the other baby, Baby R, the researchers saw that she was happy before she cried. “”Infant R appeared to cry deliberately to get her mother’s attention,” wrote study author Hiroko Nakayama, “[then] she showed smile immediately after her mother came closer.

What is fake about the fake cry?

Nakayama continues to point out that although some parents see the fake cry as deceptive, it shouldn’t be viewed as such. Babies need attention from their care-givers, and “individual interaction contributes greatly not only to an infant’s social development but also to their emotional development. Infants who are capable of fake crying might communicate successfully with their caregivers in this way on a daily basis. Fake crying could add much to their relationships.”

After all, Baby R had two other siblings to contend with, while Baby M was an only child. That could have an impact on the amount of fuss needed to grab the caregiver’s attention.

The problem is with the name, says Tracy Cassels, a PhD candidate in developmental psychology at the University of British Columbia who writes a blog called Evolutionary Parenting. “I would call it a calling cry. When I want to get my husband’s attention, I can yell down to him. These babies can’t do that, so all they have is the cry.”

Cassels says that people see the term fake crying, and assume that babies are out to manipulate their caregivers. “It’s not malicious, they’re just trying to survive in a world where they are 100% dependent on other people,” she says. “If we don’t allow babies respect, then we’re shutting down all forms of communication for them.”

Crying may be a last-ditch plan when subtler methods of getting attention aren’t working, says Darcia Narvaez, a professor of psychology at the University of Notre Dame. “In 99% of our history it would have been maladaptive for a baby to cry unless it was alone (to get help) because it would attract predators.”

In today’s world, where infants aren’t carried or within reach all the time, babies use whatever they have to get attention. Just don’t call it fake.