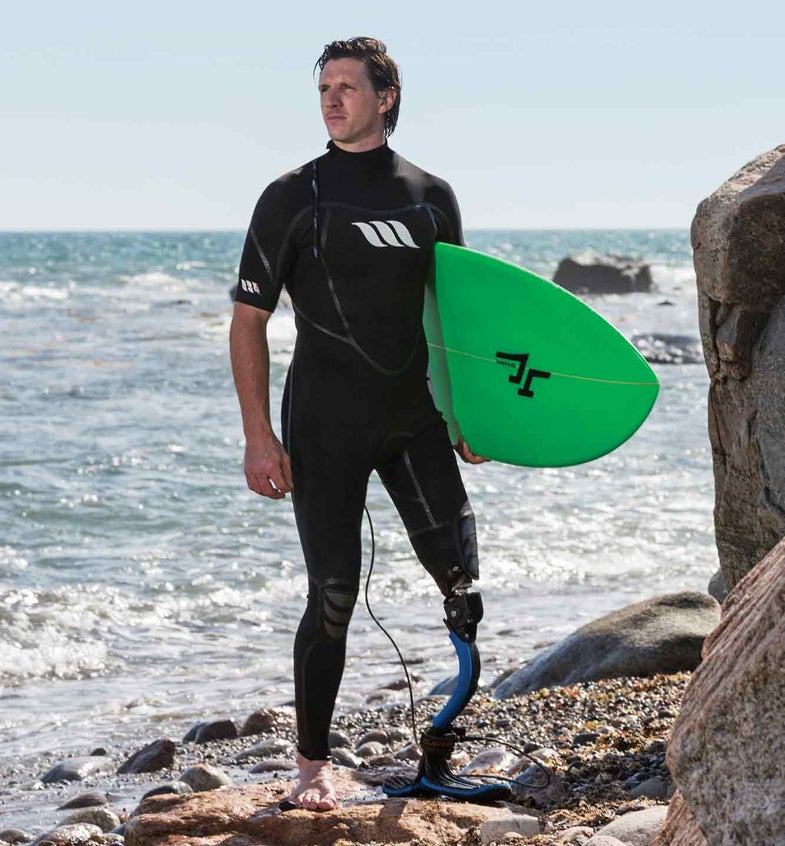 About a year ago, 26-year-old Colin Cook was surfing off Hawaii when a 13-foot-long tiger shark knocked him off the board, clamped onto his left leg, and dragged him underwater. Cook pummeled the shark’s nose. Then his leg gave way above the knee. Cook swam to the surface, and a nearby paddleboarder helped him to shore. Just one day after the attack, while he was still in his hospital bed after surgery to repair the wounds on his hands and leg, Cook began researching how he could get back on the board.

“I didn’t want to let this get between me and surfing,” he says.

But the news was grim: An above-the-knee amputation made pulling his legs underneath himself to stand on the board and then subtly shifting his weight to turn nearly impossible. Only three above-the-knee amputees had ever even stood up on a surfboard.

After Cook moved back to his parents’ home in Rhode Island for a painful rehabilitation, he began talking with two childhood friends, Brendan Prior and Max Kramers—who design and build carbon-fiber racing-yacht components—about creating the first above-the-knee prosthetic made specifically for surfing.

The leg needed to be stiff enough to support his weight and telegraph the feel of the board, yet have enough flex in the knee and ankle areas to allow him to quickly pop up and maneuver. “We wanted it to work like a knee so he could keep the center of gravity over the middle of his foot,” says Prior.

The first iteration, a bowed black composite strip with an inverted Y at the bottom, was so long that Cook could barely stand. For the next attempt, the team shortened the leg and changed the angle of the knee. They also added a small twist to the “foot” so it would pigeon-toe outward, which helped Cook’s stance and stability.

Seven months after the attack, Cook began using the homemade prosthetic to surf off Rhode Island. It was awkward and hard at first, but he adapted his technique and continued making small adjustments to the leg. By this past August, he was back in Hawaii, surfing every day.

“This is the first thing in my life that feels like a huge accomplishment: to overcome this, to surf again, to develop my own prosthetic with my friends,” he says. “I almost have to say it out loud to believe it.”

This article was originally published in the November/December 2016 issue of Popular Science, under the title “Even A Shark Attack Can’t Stop This Surfer.”