Nanosculpting a thousand times faster than ever before 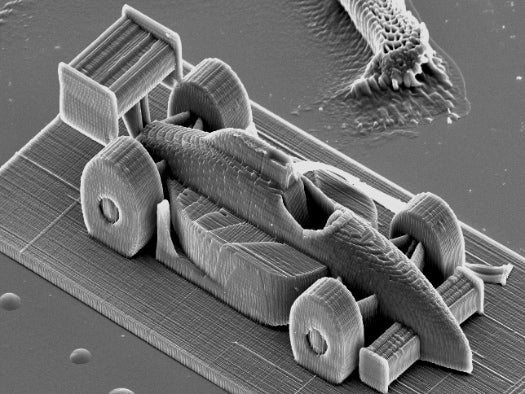 What’s the point of 3-D printing an Indy car if it’s not ultra-fast? Using a high-resolution 3-D printing technology known as “two-photon lithography”–a technique that is normally quite slow–researchers at the Vienna University of Technology have made a huge breakthrough in printing speed, setting a new high-speed record by printing orders of magnitude faster than was previously possible.

The new super-fast printing technology relies on a liquid resin filled with photoactive molecules that harden when they absorb two photons from a laser beam. This resin is actually a breakthrough in itself, as it allows a fast-moving, highly focused laser beam to quickly harden the liquid medium in just the right places. By improving the control mechanism of the mirrors that guide the laser, the team was able to vastly increase the speed with which the laser can blow through the liquid resin, setting with precision layer by layer.

In doing so, this technique–which used to be measured by millimeters per second–can now cover five meters in one second. For the race car pictured above, that means rapidly laying down 100 layers of hardened resin each consisting of 200 single lines each in just four minutes. The race car itself is just 285 micrometers long and has to be imaged with a scanning electron microscope. But because the technique is now so fast, researchers now say this super-high-resolution fabrication technology can be applied to larger objects as well.