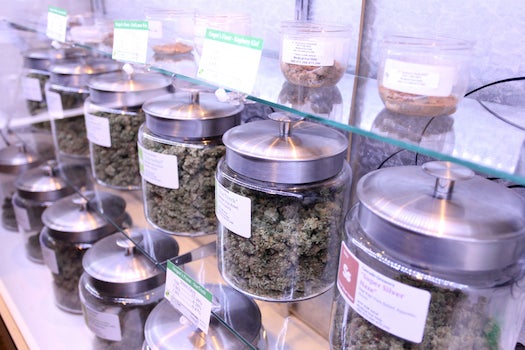 Medical marijuana isn’t always as advertised—at least not in the Seattle area, as one lab found out.

The lab, Analytical 360, recently worked with medical-marijuana patient Jessica Tonani to test samples from 22 area dispensaries and growers, The Seattle Times reports. The samples were all supposed to be of a strain of marijuana called Harlequin that has low levels of intoxicating chemicals, but high levels of therapeutic ones. Instead, five of the samples were the opposite. They were high in psychedelic tetrahydrocannabinol (THC), but had “virtually no” cannabidiol, which medical-marijuana users seek to help with the symptoms of epilepsy, inflammatory bowel disease and other diseases.

“You don’t want a 6-year-old with epilepsy being put on a bus under the influence of a psychedelic chemical,” Tonani told The Seattle Times. No, you do not.

As more states have legalized medical and recreational marijuana use, there’s been growing interest in making sure pot products are clean and consistent and offer customers the effects they want. It’s just like any other commercial product, from ibuprofen to Greek yogurt. Last year, Chemical & Engineering News reported on small commercial labs, including Analytical 360, that had popped up to offer marijuana chemistry-testing services. “Why should medical marijuana be different from any other pharmaceutical?” C&EN asked, rhetorically. Before that, Slate published a story that included the reporter’s brother, a scientist for a commercial lab who helps breeders and dispensaries determine the strength and quality—no mites or mold, please—of their stuff.

So the infrastructure for maintaining quality control in commercially sold marijuana is there. But the new Seattle Times report shows not every dispensary is testing its products, or heeding the results of tests. Consumer demand for more consistent products may push dispensaries to shape up. So might stricter laws. The Times points to the state government of Connecticut, which doesn’t allow marijuana growers to give plants certain names, such as Harlequin, unless those plants meet certain chemical profiles.

What we don’t recommend is relying on the goodwill of people who are in the business, despite what one grower told The Seattle Times: