The future of agriculture may be plant-fungus symbiosis, writes Issie Lapowsky for WIRED 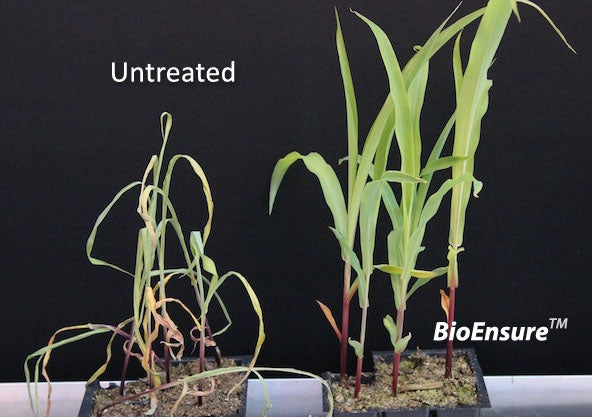 According to AST, these trays of 3-week-old corn plants were subjected to eight days of drought. The BioEnsure-treated plants on the right continued to thrive, while the untreated corn on the left shriveled.

The global population continues to grow, and climate change is already tangibly reducing food harvests. Can agriculture adapt to be both more productive and more resilient?

One answer to that question may be “add fungus.” Issie Lapowsky reports today for WIRED that a Seattle-based startup named Adaptive Symbiotic Technologies is almost ready to put a fungi-based product on the market that enables rice, corn, and other crops to bear up amazingly well during drought and temperature extremes.

According to Lapowsky, the product, called BioEnsure, is a blend of microscopic fungi that Dr. Rusty Rodriguez and his wife, Dr. Regina Redman, first discovered in the 1990s. They had been trying to figure out how some plants were able to grow in the barren soil and peak 150 degree-Fahrenheit temperatures at the center of Yellowstone National Park. They discovered that fungi had colonized the plants and essentially lent them extra resilience. When the fungi were removed in the lab, the plants failed under the same heat.

Since 2008 Redman has been tweaking fungi blends to work with wheat, soybeans, rice, and corn crops.

BioEnsure has been proven in real-world conditions, Lapowsky writes:

AST has been nominated (along with 16 other contestants) for a Securing Water for Food award by the U.S. Agency for International Development. The young company’s next big hurdle may not be extreme weather, reports Lapowsky, but the influence of the agriculture-industrial complex that reaps massive profits from chemicals that BioEnsure could render unnecessary.