But the ice is thin. 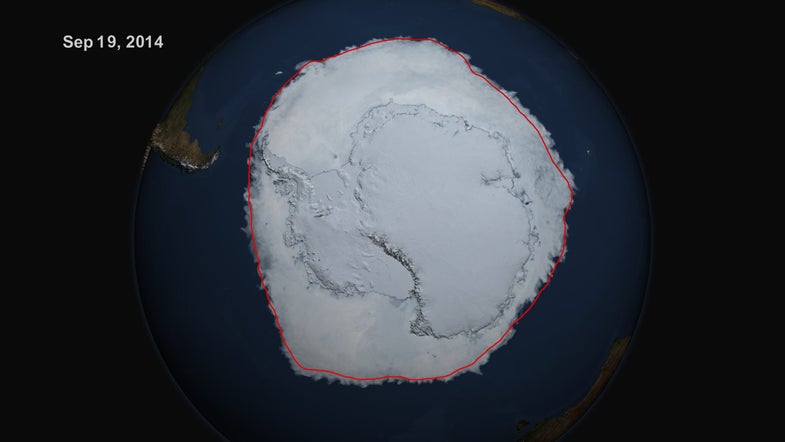 Even as most of the world’s ice is melting due to climate change, Antarctica’s sea ice grew this year, to cover more ocean than ever in human memory.

Researchers maintain a catalogue of satellite images of the frozen Antarctic seas that dates back to the late 1970s. While the northern Arctic has lost an average of 20,800 square miles a year in that time, NASA says, the Antarctic has gained an average of 7,300. On an average year, Antarctica’s sea ice maxes out at about 7.23 million square miles. On September 20, it peaked at 7.78 million–the most ever. Satellite images show how much of the ocean’s surface freezes, but ignore other factors like ice thickness and volume. Massive, ancient chunks of ice have disappeared into the ocean even as this temporary, seasonal, and relatively thin cover has grown.

NASA researchers believe the new record was a product of changes in climate patterns of air and water circulation near Earth’s southern pole. Among the possible culprits: shifting winds and ocean currents shoving colder air and water toward the area, and increased snow seeding the ocean with slush that could form a more resilient ice cover. Antarctica, far from other continents, also has few obstacles preventing its ice from expanding in the right conditions.

“It’s really not surprising to people in the climate field that not every location on the face of Earth is acting as expected – it would be amazing if everything did,” Claire Parkinson, a NASA scientist, said in a statement. “The Antarctic sea ice is one of those areas where things have not gone entirely as expected. So it’s natural for scientists to ask, ‘OK, this isn’t what we expected, now how can we explain it?’”