In a major first, an experiment in the California lab got more energy out of its fuel than went into the fuel. We're one step closer to ignition, when the reaction becomes self-sustaining. 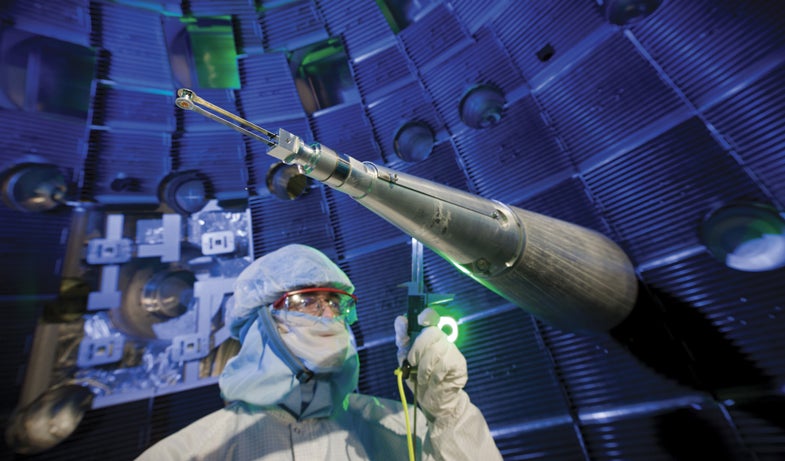 Researchers at the National Ignition Facility (NIF) at the Lawrence Livermore National Laboratory in California have made a major breakthrough toward achieving self-sustaining nuclear fusion.

The NIF is home to the highest-energy laser in the world—a composite of 192 lasers, all trained on one tiny pellet of the hydrogen isotopes deuterium and tritium. The pressure from the lasers is designed to compress the fuel pellet (inside a dime-sized cylinder called a hohlraum) until the deuterium and the tritium fuse together, releasing a huge burst of energy. The process is designed to replicate the inside of a star, mimicking the Sun’s long-lasting, self-sufficient energy creation here on Earth for a vast, cheap supply of power.

Scientists have been working towards creating fusion energy in the lab for decades, but creating a system that puts out more energy than it takes in has so far proved impossible. Now, the NIF has reportedly conducted an experiment in which the amount of energy released by the fusion reaction in the hohlraum was greater than the amount of energy that went into the pellet. The achievement was first reported by the BBC, and a source with knowledge of the experiment has confirmed the results to Popular Science.*

This is still a step away from ignition, the point where the reaction releases as much energy as went into the system as a whole, since the system isn’t totally efficient and some of the laser energy that goes in doesn’t reach the pellet. But it’s a major breakthrough nonetheless, the first time in the world that scientists have been able to achieve this level of (minor) efficiency in a fusion energy reaction in the lab.

When the NIF started operating in 2009, the lab promised it would achieve ignition by September 2012, a deadline it obviously blew past. Since ignition researchers couldn’t predict when ignition would be achieved, or even what they were doing wrong, the NIF’s government funding has been in jeapordy. Proposed budget cuts for the NIF for fiscal year 2014 would reduce the lab’s funding by $60 million. “It is impossible at the moment to predict whether ignition can be achieved,” Senator Diane Feinstein, a member of the Senate Appropriations Committee, said in May. “Now is the perfect opportunity to reassess the goals of this program.” In other words, the government doesn’t want to pour its billions into a high-energy pipe dream.

But it seems the NIF has plugged at least some of the leaks allowing energy out of the system. How exactly they managed to achieve this feat, we don’t yet know, although a review in Physics of Plasmas published online this summer detailed some of the potential causes of the NIF’s performance issues. John Edwards, the associate program director for inertial confinement fusion and high energy density (HED) science and the study’s lead author, explained in a press statement that “the NIF has met many of the requirements believed necessary to achieve ignition—sufficient X-ray intensity in the hohlraum, accurate energy delivery to the target and desired levels of compression—but that at least one major hurdle remains to be overcome, the premature breaking apart of the capsule.”

_*This article has been updated to clarify its sourcing. _