Someday they could save your life 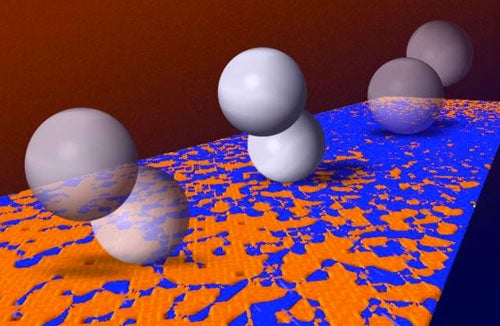 In the 90s kids show The Magic School Bus, eccentric teacher Ms. Frizzle took her class for a wild ride in a sick student’s immune system — only to be attacked by white blood cells. White blood cells tracked the bus using the same chemical traces they follow to find infected sites or navigate their way to viruses. If microscopic robots could replicate this complex navigation system, which is shared by many different cells and bacteria, doctors could use them to provide real-time updates on internal structures or distribute drugs to specific targets within a body.

MIT physicists have begun to work toward this vision by developing a microscopic machine that can imitate certain movements of white blood cells and bacteria. In the study, published in Physical Review Letters, scientists used two tiny metal beads to model the tumbling action of bacteria as they migrate toward areas of higher friction.

The simple robot was manipulated with a rotating magnetic field, which propelled the machine to walk, or tumble, forward on a modeled cell surface. The model housed a complex terrain with varying degrees of friction created by layering vitamin particles and protein molecules to simulate the terrain of a cell surface. Through this artificial landscape, the machines automatically gravitated towards vitamin particles, areas that created higher friction.

Now, replace this model cell surface with an actual cell surface. The friction isn’t created by particles on glass, it’s created by the cell’s surface receptors. The binding sites of these receptors are often the targets for many drugs.

“We could eventually use this as a way to tag on things and take them to remote places in your body and monitor different conditions in your body. That’s really far down the future,” says Alfredo Alexander-Katz, a professor at MIT and an author of the study.

The next step for scientists is to test the robot on live cells created in-vitro, says Alexander-Katz. It’s much different to create machines that will bind to a real cell than a model surface. So for now, tiny robots that infiltrate your body may be just as fictional as a magic morphing school bus.