But don't try this at home. 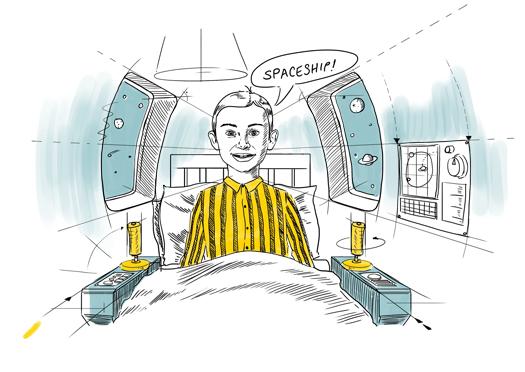 In case you hadn’t heard, stimulation of the brain with mild electrical currents can in some people induce lucid dreaming: the ability to become self-aware in dreams, and to sometimes control them.

In the study, the scientists, led by Ursula Voss at the J.W. Goethe University in Frankfurt, Germany, stimulated sleepers’ brains using a weak current set to a particular frequency, in a technique called transcranial alternating current stimulation (tACS). Christian Jarrett at Wired has a good rundown of the study:

The main result is that stimulation specifically delivered in the low gamma range, at 40Hz, and to a lesser extent at 25Hz, was associated with a greater experience of lucid dreaming, as compared to stimulation at other higher and lower frequencies or to sham treatment. “Our experiment is, to the best of our knowledge, the first to demonstrate altered conscious awareness as a direct consequence of induced gamma-band oscillations during sleep,” the researchers concluded.

The researchers define lucid dreams as those in which participants have higher self-reported scores in three areas: self-awareness of dreaming (insight), taking on a third-person perspective (dissociation), and–most intriguing to me–control over one’s dreams. As Virginia Hughes wrote at National Geographic, 40 Hz was the “sweet spot” for average scores on these measures.

However, the ability to control one’s dreams spiked at 25 Hz, and showed no increase at 40 Hz. This suggests, as the researchers wrote, “25-Hz oscillatory activity may be functionally distinct from 40-Hz activity.” That’s really important if you want to be able to control your dreams. Participants experienced 25 Hz or 40 Hz zaps on separate occasions to tell the difference between them.

I doubt I’m wrong in assuming that control is probably the most desired aspect of lucid dreaming–and is often considered to be intrinsic to lucid dreaming. This study suggests that there may be something that is distinct about control, or at least that it is elicited in a different way. I’d be willing to bet that those dreams in which the sleepers took control were more exciting to experience.

While we’re on the topic of lucid dreams, here’s a Popular Science story from January 2012 about how it is possible to control your dreams, without electricity but with practice.

The study was published May 11 in the journal Nature Neuroscience..