Going off the grid? Keep the electricity on all night. 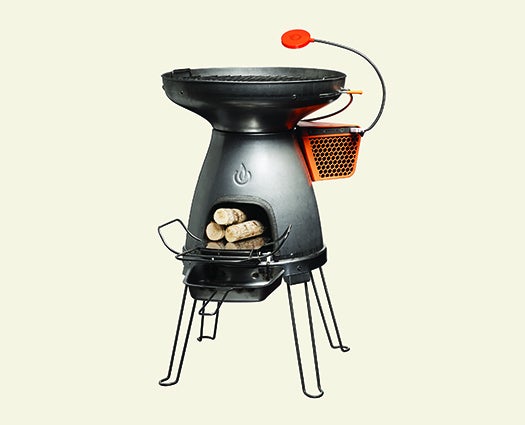 Two years ago, BioLite introduced its CampStove, the first portable cooker to convert waste heat into electricity. The stove produced enough power to recharge a phone—perfect for an overnight in the woods—but lacked the juice to allow a whole campsite to go off the grid. The new BaseCamp generates more than double the electricity of its compact predecessor—enough to power strings of lights, charge GoPros, and furnish other comforts. Engineers overhauled the unit’s thermo-electric generator (TEG), incorporating a new fan design that delivers more hot air, increasing the TEG’s output. The electricity created powers the fan while charging a device plugged in via USB (or an onboard 2,200-milliampere battery). A side door lets campers feed the flame, so the lights will last as deep into the night as the campers do.

Four Ways To Supercharge A Barbecue

With this souped-up lighter, coals will be ready five times faster—no lighter fluid needed. It’s battery-powered and jets a four-inch flame onto coals; an internal fan stokes the fire. The embers will be ready for burgers in about five minutes. $100

Mom wants her steak well done,Dad prefers his bloody, and the kids like theirs slightly pink? No problem. The iGrill2 lets the chef track the progress of four cuts at once. Temperature probes relay data to a smartphone app over Bluetooth, so you’ll know when your food is cooked without having to babysit it. $100

Using a combination of convective, conductive, and radiant heat, the Pizza Oven Box turns a grill into a makeshift wood-fired oven. Place the cooking chamber on the grill surface, and in 15 to20 minutes, it will heat to as high as 800°F. Once at full force, the box will bake a pizza in two to four minutes. From $129

Scrubbing a grill isn’t nearly as appealing as cooking on one, but this robotic brush does the dirty work for you. After dinner, drop the nine-inch bot on the cooled cooktop, and set it for 10-, 20-, or 30-minute cycle, depending on how grimy the surface is. It will scurry back and forth like a Roomba until the job’s done. From $120