BioLite CampStove Review: Cook Your Food And Charge Your Gadgets In The Wilderness

The BioLite is a regular woodstove, meant for camping, but it converts excess heat to electricity so you can plug in any USB-powered gadget. Just in case your iPad dies while you're trying to camp. iPads are important. 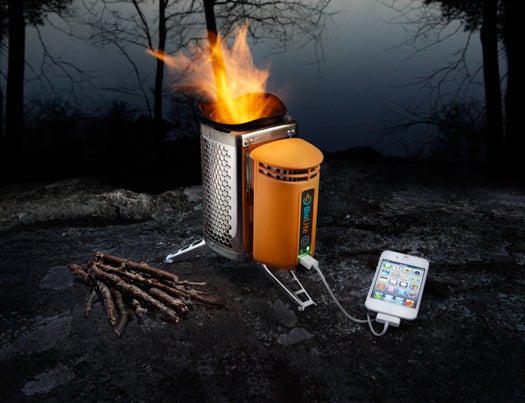 The big deal about this stove compared to other small camp stoves? Power. The BioLite has a USB port to charge your gadgets from excess heat generated from wood fires.

The CampStove’s orange module houses a thermoelectric element, a battery, a fan, and a microprocessor. The microprocessor tweaks power distribution as needed to charge the battery or connected device. When you burn wood in the chamber, a copper probe transfers heat to one side of the element, while on the other side cool air provides a differential that enables ions to jump sides and generate electricity. The electricity powers a fan that pushes air through vents that stoke a vortex of wood blaze. It’s so efficient you can use leftover electricity to charge devices while you cook a meal.

As a stove: It’s small and attractively designed, made of steel and orange plastic. Mine weighed in at two pounds two ounces, nice and light, and I like the way it stands up–three aluminum legs fold out on hinges like something designed for Curiosity.

Typical wood fires are not the most pleasant to cook around, due to smoke (ow, my eyes!). The BioLite produces smoke when the fire is first lit, but once the fan starts to direct the air flow, there’s almost no smoke and zero embers fly out.

The BioLite is perfect to boil water in a pot. I prefer my camping meals light and simple to prepare, so this stove is great for heating up water to rehydrate freeze-dried meals. The fire mellowed when we pressed the power button to set the fan mode from high to low and we even fried eggs in a pan. For tea, I boiled a cup of water in roughly two minutes, which would have easily taken three times longer with my alcohol stove. (Some more data: bringing two cups of 53-degree water to a vigorous boil took three minutes.)

The stove’s also smart–sometimes even smarter than you. When a user tries to turn off the fan before the chamber is cool enough, the fan turns back on — a sure sign you should avoid touching the chamber. The power module can be touched throughout use and only reached about 125 degrees — just warm to the touch. Once the chamber cools, just dump the small bit of ash leftover. The chamber itself is steel, so you can throw it in the dishwasher back in civilization.

As a charger: Let the fire burn for a few seconds, then hit the single button on the power module, and it all starts happening. A few minutes later, a light around the USB port turns green, and your USB-based gadget starts to charge. Sweet! Charge times depend on the device–mostly, the capacity of the battery and the speed of the USB connection. It’s not going to bring your phone to 100 percent in the time it takes to boil water, but our testing showed that charging during a regular cook–around 20-25 minutes–increases the battery on a smartphone (we tested with an LG Optimus V) between 6 and 12 percent, giving you about an hour of talk time. Not bad, considering at its hottest the BioLite delivers only four watts.

Compared to an alcohol stove, we like the size much better–it’s wider, so it’s easier to balance pots, pans, and kettles, though the overall size is also bigger. Not really having to worry about fuel is nice, too, since it’s wood-fired, and though it does get a little sooty, it beats an alcohol stove to boil water in most conditions. It also turned out to be a really cool little wood stove for a New York City roof. Using wood pellets (I found mine at Trader Joe’s), the stove was perfect to grill a steak or a burger.

I took the CampStove out on multi-day canoe camping trips. One trip was a constant deluge of rain and all my tinder and kindling were soaked. The fan helped produce enough heat to boil a couple liters of water but took nearly 30 minutes. To be fair, I likely would have never gotten a boil with a wood fire without the CampStove. (Fun note: I’ve learned since then that chunks of wood from inside fallen logs stay pretty dry even in the rain.)

The first time, I neglected to charge the power module (as recommended) before leaving civilization, so that may have made matters worse. The battery needs to be conditioned with a charge from a USB port from a computer or most adaptors the first time it’s used. You only need to condition the battery for the first use or after a long time on the shelf, so that’s just once at the beginning of a season.

Also, if the fire starts to falter before you’re done cooking, you have to lift the pot or pan to sneak some more tinder into the chamber. That’s a minor annoyance, but one that can be avoided if the first fill of kindling is fairly dense and you’re just cooking for one or two people. And though it’s an efficient stove, the CampStove fire is only four inches in diameter. You won’t grill a porterhouse on it or vegetable kebabs — though BioLite plans to release a grill add-on for spring 2013.

$129 on BioLite’s site. That’s more than a little alcohol stove, which usually cost around 40 bucks or even less. The CampStove’s price puts it at the same price point as some really nice compressed-fuel stoves. But you’re getting a lot more for your money–and a compressed-fuel stove won’t charge your iPhone.

When I first saw the CampStove on Kickstarter, I smirked and tossed the idea in the “gimmicks for iPhone” category. But then I learned about the science that powers the little machine, and was intrigued enough to burn some wood in it. I’m glad I did. I think campers and especially backpackers will find this stove a reliable tool for the trail. If that weren’t enough, at home, the CampStove perched on a shelf doubles almost as a functional piece of modern art that, at the very least, encourages you to get outside into nature.