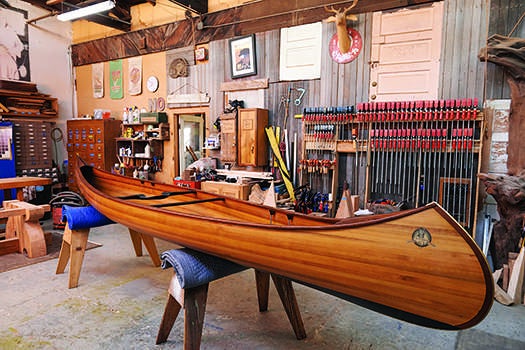 Offerman built a canoe for its value as a "charismatic human artifact," he says. "In hindsight, it was incredibly ambitious, but I just had the madman's ambition.". Photograph by F. Scott Schafer
SHARE

The hustle of Hollywood isn’t exactly conducive to hobbies, especially not a mastery of woodworking. Yet actor and comedian Nick Offerman, known for his role as Ron Swanson on Parks and Recreation, snuck in the time to build this 18 foot-long canoe called Lucky Boy. Offerman spent four months crafting the 50-lb. vessel with guidance from Bear Mountain Boats in Canada. He glued together roughly 100 planks of western red cedar, shaped and sanded the hull, and then sealed it with fiberglass cloth and epoxy. He trimmed the boat with seats and gunwales made of sapele mahogany and decks carved from walnut and ebony. Nothing compares to putting a canoe in the water for the first time, says Offerman, who grew up paddling in Illinois and Minnesota. “It feels as though you invented fire,” he says. “You realize that, with the proper hatches and sails, you can take a version of this and circumnavigate the globe.”

Time to build over evenings and weekends: 4 months