Why Does Your Nose Run When You’re Sick? 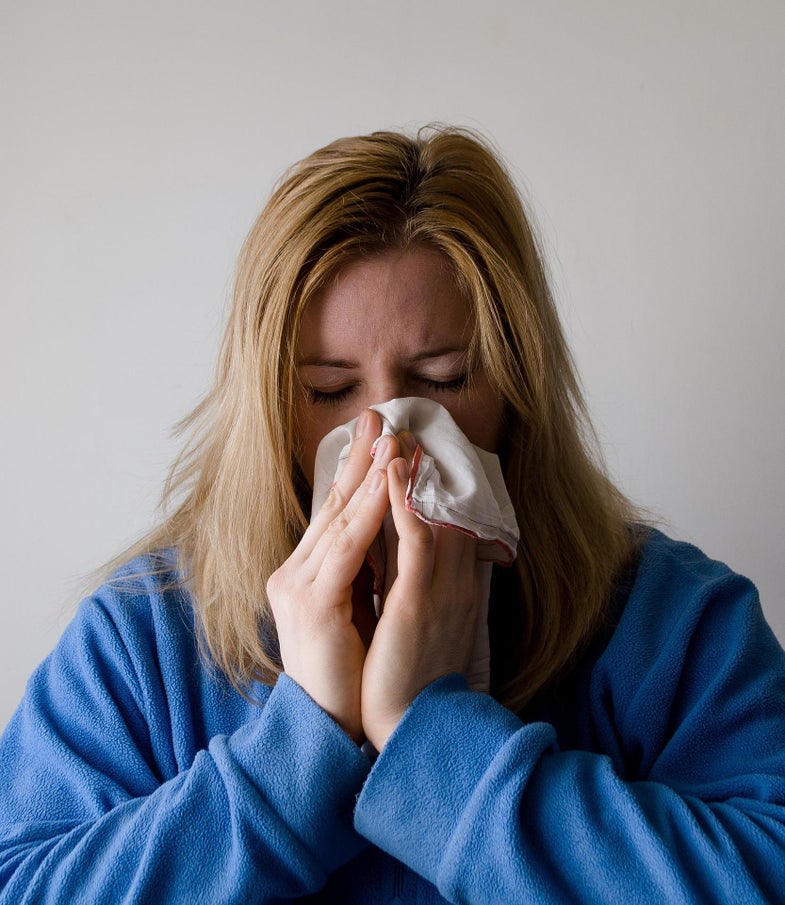 At this time of year, it can feel like everyone around you has a head cold. Decongestant medicine, tissues, and runny noses close in on all sides. But why does your nose run in the first place?

The answer lies in the way your nose combats disease. The nose is a complex organ—it warms and modifies air as it comes into your body, and acts as a gatekeeper against the external environment, says Stella Lee, a professor of otolaryngology at the University of Pittsburgh Medical Center. That means it’s a major battleground for the immune system as it works to protect your body from invading disease.

Even when you’re not sick, your nose is lined with mucus. It traps disease-causing bacteria and viruses that might infect you if they reach more vulnerable body tissues. A layer of cilia—those hair-like structures that cover the interior of your nose—moves that mucus from the front of your nasal passages towards the back and down your throat.

When you’re sick, it’s because pathogens have gotten past the mucus lining. To protect your body, the immune system kicks into action. Small proteins called cytokines deploy T cells and B cells to seek out and destroy the pathogens. Those same protein messengers instruct cells in the nose to generate more mucus in order to clear the cell lining of other potentially harmful bacteria or viruses. As mucus goes into overdrive, your mucus lining swells and your nasal cavity fills with excess fluid. This can drip out of the nose itself—a medical condition known as rhinorrhea, which the rest of us call a runny nose. Once your body clears the pathogens, your immune system will decrease its panic signals and your mucus lining returns to its usual level.

Generally, Lee says, the immune system in your nose is very adept at identifying cells that the body makes to create your tissues and fluids (those are usually safe) from foreign cells that that need to be attacked. Sometimes, however, that system is not so great at knowing when to shut off its response, or at identifying which cells it should be attacking. Over-active or misdirected immune responses cause conditions like allergies or asthma–the body launches a full-scale attack at something that wouldn’t really harm it, which causes damage to the body’s own tissues.

Be careful with your nose!

Even when your body has discharged its invaders, the mucus carrying them is highly contagious. In other words, it can still transmit disease to others. You already know that frequently washing your hands is a great way to avoid getting sick, but Lee is emphatic about it: Touching your nose, mouth, or eyes without washing your hands can mean that disease-causing bacteria and viruses can infect (or re-infect) you more easily. “As a doctor I see sick patients all the time, but I wash my hands constantly so that I don’t get sick,” Lee says.

If you do get sick—and it’s unavoidable for many of us, Lee acknowledges—it’s important to be careful with your nose. Blowing your nose too hard can damage the delicate cilia. It can even propel pathogens deeper into the nasal cavity, where they can further infect the body. Lee suggests treating a stuffed or runny nose by moistening the nasal lining with saline solution (through nasal sprays or irrigation tools like neti pots). This will help loosen the mucus and help bring it back to normal more quickly. You can also use a nasal decongestant drug. But don’t be surprised if your doctor doesn’t prescribe antibiotics—the majority of colds are caused by some form of virus, which the body can get rid of in less than two weeks. If your symptoms get worse after that time, then maybe a bacterial infection has taken hold, in which case you would require antibiotics, Lee says.

All in all, having a runny nose might be annoying, but it’s a good sign. It means your immune system is doing its job. You’re welcome.