More people are climbing the mythical peak than ever before. 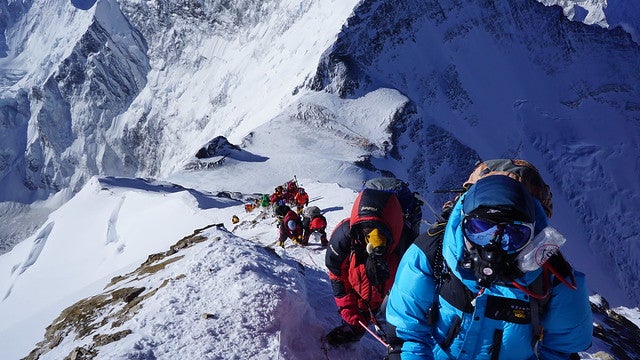 Part of the Himalyan chain, Everest took its current shape sometime in the last 2 million years, thrust upward by collisions between the Indian-Australian and Eurasian tectonic plates. Today, Everest’s summit soars 29,000 feet above sea level, and continues to grow about a quarter-inch each year. The mountain’s existence has long been a fact of life for Central Asians living in its shadow. But in the 1850s, the so-called “golden age of alpinism,” Everest came to the attention of Westerners, after an Indian mathematician working for the British colonial government identified it as the highest peak on the planet. But it would take another century of exploration before Hillary would reach the top.

Things have sped up considerably since then. In the 66 years since Hillary’s world-famous expedition, more than 4,800 people have completed the daunting trek—and an estimated 300 have died trying. Eleven of those deaths have been in the past two weeks alone.

That’s made this season a lightning rod for political, economic, and interpersonal drama. This year, Nepal, one of the poorest countries in the world, issued a record number of permits to Everest hopefuls. Expert mountaineers say many of these permits went to newbies, who brought money (agency-led expeditions can run for more than $45,000) to the mountain, but no relevant experience. And everyone’s rushing up the mountain at the same time: Everest is usually surrounded by a ferocious jet stream, so when the winds abate for brief periods in the spring, climbers go wild. The result, in the words of the New York Times, is a mountain reminiscent of Lord of the Flies—a “zoo” overcrowded by “fly-by-night adventure companies.”

But what exactly about this three-ring circus in the clouds is killing mountaineers?

Luanne Freer is an emergency medical doctor. In 2003, she founded Everest ER, to serve climbers and sherpas injured on the mountain. The problem, she says, is primarily one of altitude. But the ways in which thin air can destroy a human body are surprisingly diverse.

Most humans live near sea level, and for good reason. No matter how physically fit or genetically gifted, members of our species start to struggle above 8,000 feet. While it depends on the individual, the most common symptoms are fatigue, headaches, vomiting, and dizziness. Everest base camp, where Everest ER operates and climbers spend most of their time on the mountain, is at 17,600 feet. Freer says most people can hang out there for a few weeks, maybe even a few months, without too many adverse side effects. But summiting Everest requires hikers to gain an additional 12,000 feet of elevation. That’s where things get really dangerous.

In the so-called “death zone,” at altitudes between 26,000 and 29,000 feet, “we are literally racing against the clock and will die if we don’t descend,” Freer wrote in an email. “Bad weather, snow, difficult terrain, crowds impeding ascent or descent on a fixed rope, an otherwise minor injury—anything that slows us down can be potentially deadly.”

To put it another way: “You’re slowly dying above 18,000 feet,” says Peter Hackett, a clinical professor in the University of Colorado School of Medicine’s Department of Pulmonary Sciences. “But when you get above 26,000 feet, you start dying much more quickly.”

To make it to the top alive, the majority of climbers (including Edmund Hillary) rely on tanks of oxygen, though some have made the ascent unassisted. With a steady supply of compressed gas cylinders, Hackett says hikers can make 29,000 feet feel more like 24,000. It’s a huge relief, but it’s not enough to sustain you for the long term.

Without enough oxygen, the brain becomes compromised. “Thinking is impaired, judgment is impaired, motor coordination can be impaired,” Hackett says. This hypoxic state may contribute to deadly mistakes, like falling off a cliff face or deciding to rest in the middle of a climb. “Someone who’s running of oxygen may think they can sit down, and they’ll never get up,” Hackett says. “What someone is experiencing there is exhaustion exposure, a combination of exhaustion and hypothermia.” Add in the long lines coming down due to overcrowding, and you’re more likely to freeze up as you stand idle, or exhaust the little energy you saved up from the ascent.

If hypoxia wasn’t bad enough, climbers are also at risk of high-altitude cerebral edema, when low oxygen levels trigger brain swelling. “All the symptoms [of hypoxia] are just magnified,” Hackett says. “It’s like they’re acting drunk.” It’s still possible to intervene with oxygen, a rapid descent, and the steroid dexamethasone, but in a place like Everest, that window closes quickly. Most of the bodies of people who die on the mountain are left there to be slowly covered by snow and ice.

Everest ER treats a range of illnesses, including frostbite, heart attacks, breaks and sprains, infections, and altitude sickness. The most common complaints are respiratory issues, including the Khumbu cough, or high-altitude hack, a body-shaking croak so severe it’s fractured a few mountaineers’ ribs. But lung issues can kill people long before they return to base camp for assistance. Some mountaineers die from high altitude pulmonary edema, when the lungs are so constricted and stressed, the capillary walls start to leak and people’s lungs fill up with fluid.

Up in the clouds, hikers also face an increased risk of sudden cardiac death. Some people are born with irregular heartbeats called arrhythmias, but because they spend most of their lives close to sea level, they never even know about it. But high altitude can exacerbate a lurking heart condition. When young mountaineers die suddenly or in their sleep, arrhythmia could be to blame. Meanwhile, older hikers are more likely to suffer from a heart attack. At altitude, where bodies aren’t getting enough oxygen, the blood thickens, and everyone’s pushing their bodies to the extreme, people with undiagnosed heart disease are at an additional risk of sudden death.

Nepal requires aspiring Everest climbers to bring a doctor’s note. But Hackett says even a full-blown cardiac stress test can’t anticipate the challenges one faces in the death zone—especially if your doctor’s office is near sea level. As for arrhythmias or other congenital risks, the only option would be for climbers to pursue DNA sequencing, something that hasn’t taken off among hopefuls or their physicians.

Even as doctors and mountaineers can number 1,001 ways a person might die on Everest, Hackett is hesitant to draw firm conclusions about the recent spate of deaths. That’s because the information is still trickling in, and what we do know raises more questions than answers.

In the past, most people who have died from lack of oxygen have been alone, Hackett says. When you’re hiking in a big group, or even if you’re surrounded by strangers, bumming a hit of O2 should be fairly easy. So it’s not likely that crowded lines to the summit are the sole cause of the recent run of fatalities. Furthermore, the majority of mountaineers appear to have died on their descent—just as they were getting back into the relatively oxygen-rich environments below the summit. “The fact that these people are dying on the way down is really intriguing, because altitude sickness doesn’t happen on the way down,” says Hackett, who now raises Himalayan yaks in Colorado. It’s possible that more people are dying on Everest simply because more people are trying to climb it, thereby increasing the statistical likelihood of people with unknown heart conditions making the trek.

Without autopsies, which can be hard to come by in such harsh conditions, these deaths could remain a mystery. “I hope Everest ER people are collecting some of this data,” says Hackett, who summited Everest in 1981 and served as the Everest ER physician on duty in the 2010 season. “Sometimes, people just leave and they don’t want to talk about it… We’re sort of in the dark about a lot of this.”

While it could put pressure on Nepal to better manage permits, the recent rash of deaths certainly won’t stop people from scaling this near-mythical peak. The risk is what attracted mountaineers to it in the first place. “The climbing isn’t that difficult,” Hackett says. “What Everest is really about is the physiology of altitude.”