Where Did Green Bean Casserole Come From?

It's a weird combination, when you think about it 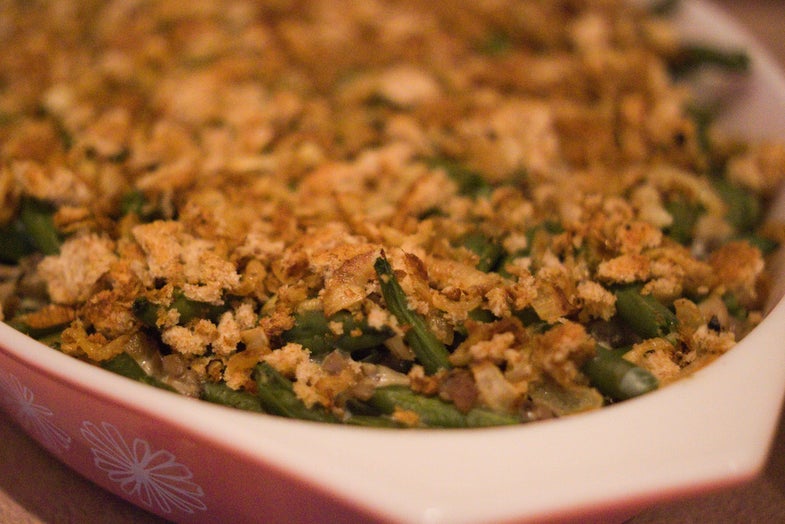 Foods like the green bean casserole feel to me like they’ve been around forever. They’re a strange combination of ingredients that somehow seems to work, and they make it onto plenty holiday dinner tables (Campbell’s estimates the number at 20 million).

It’s strange to think that they didn’t just arise one holiday by accident and get passed down through generations. But the green bean casserole did not just evolve. So how did green beans, crispy friend onions, and condensed cream of mushroom soup meet after all?

Well, it all started in 1955, at the Campbell’s Kitchen (where else?), for an Associated Press feature. The mastermind behind the recipe is a woman named Dorcas Reilly. Campbell’s published lots of recipes on soup cans, in ads, and in magazines, but the green bean casserole really gained popularity. The recipe came at a time when the country was feeling pretty great. Consumerism was on the rise, and the economy was doing well.

The recipe was originally known as the “Green Bean Bake” (which kind of has a ring to it). The ingredients are chosen based on things that most households would stock in pantries and cabinets, and would be simple, yet tasty. Which, is probably makes it so prevalent on holiday tables. The American Table says that Reilly didn’t even know how popular the recipe had become until 1960.

It turns out, so many home cooks requested the recipe (more than 10,000 in a year, according to the soup company), they started printing it on the soup label.

So this year, as you celebrate the holidays, you can say happy 60th anniversary to the green bean casserole.