Yes, he's been a flawed leader. But the departing pope was a champion of future technologies and the possibilities they offer humanity. 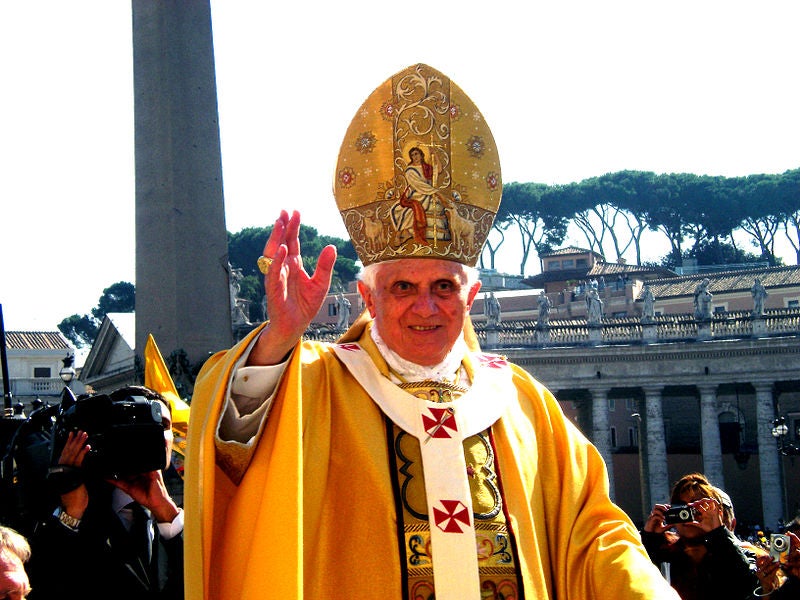 Pope Benedict XVI is stepping down at the end of this month, the first pontiff to willingly leave his post in more than six centuries. His decision sent shock waves through the Catholic community Monday, in no small part because this just isn’t done. Popes die in office, they don’t step aside. But the former Joseph Ratzinger, 85, said he is leaving because “I have come to the certainty that my strengths, due to an advanced age, are no longer suited to an adequate exercise” of papal duties.

Vatican leadership will now mobilize to elect a new Pope, in one of the oldest and most secretive processes in western civilization. They will have to replace a man who has shown an impressive–especially in terms of Catholic leadership–grasp of the possibilities science, technology and the future can offer us. And no, it’s not because he looks a lot like Emperor Palpatine. [Excuse me while I make the sign of the cross]

Click through our slideshow to see how Benedict XVI embraced science and technology during his eight-year papacy. 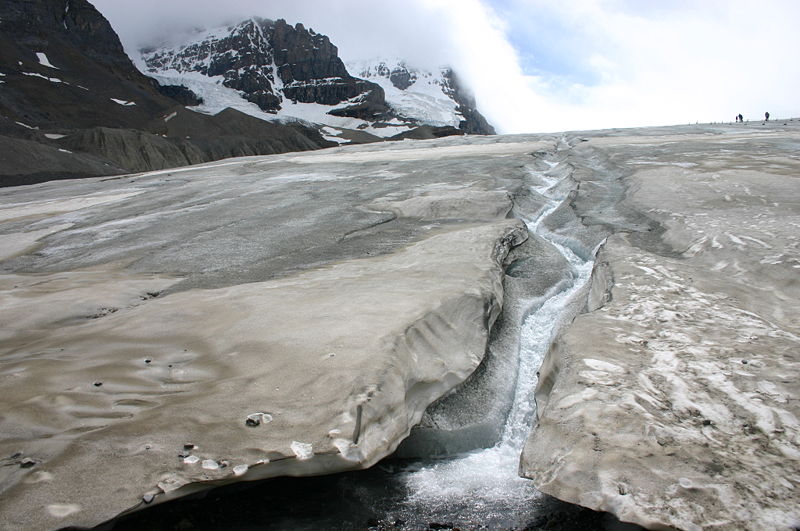 Benedict has been called the “green pope” for his statements on climate change and environmental stewardship, which he typically casts as a call to remember the poor. Under his leadership, Vatican City installed photovoltaic panels in Nervi Hall, which can hold 10,000 people. “The protection of the environment, and the safeguarding of resources and of the  climate, oblige all leaders to act jointly,” he wrote in 2008. In 2011, he called for international leaders to address climate change: “I hope that all members of the international community can agree on a responsible, credible and supportive response to this worrisome and complex phenomenon,” he said. He’s also been accused of equating environmental destruction with atheism. In 2009, he said “Is it not true that inconsiderate use of creation begins where God is marginalized or also where his existence is denied? If the human creature’s relationship with the Creator weakens, matter is reduced to egoistic possession, man becomes the ‘final authority,’ and the objective of existence is reduced to a feverish race to possess the most possible.” Pictured: The melting toe of Athabasca Glacier in Canada. 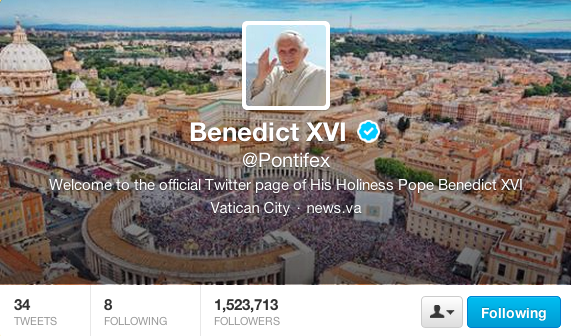 In his World Communications Address a couple years ago, Benedict said it was not a sin to use social networking sites, and encouraged young Catholics to use them. Then last year, Benedict became the first pope to use Twitter. In February, the Vatican launched the handle @Pope2UVatican–it may have been the worst Twitter name ever, but at least Benedict’s social media team understood the importance of staying in touch with the world’s 1 billion Catholics via social media. In December, the pontiff launched another handle, @Pontifex. In all, the Vatican has eight Twitter feeds, all in different languages. 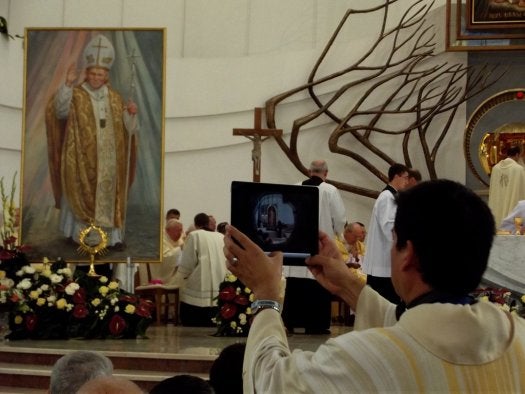 Holy Tablets Of A Different Sort

Benedict reportedly got his first iPod in 2006, and this led to a burgeoning love affair between Catholic leadership and consumer gadgets. Both priests and parishioners started using tablets during Mass in the last two years. In 2010, Rev. Paolo Padrini, an Italian priest who consults with the Vatican, launched a free iPad app that will contain the complete Roman missal: That’s the book containing everything that will be said, answered and sung in the Catholic liturgical year. Padrini made the apps of his own accord and with his own funds, but the Vatican praised Padrini’s work as a novel form of evangelization. Then during Easter festivities last year, parishes across the U.S. brought tablets into church pews. Worshippers could use Bible apps and web searches to study the Biblical passages and sermons they hear from the altar. 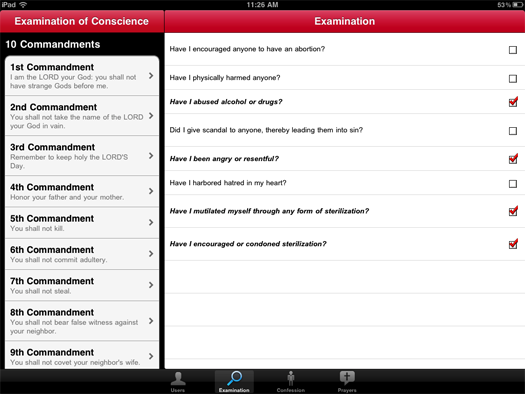 Under Benedict’s leadership, a mobile app to improve Catholics’ confessions received the church’s blessing. The Confession program walks the user through the sacraments and helps the penitent seek forgiveness. It lists the 10 Commandments and asking users questions about their lives pertaining to their age, marital status, and gender, helping them to better enumerate their spiritual shortcomings. The goal is to help Catholics when they get into the confessional. As our esteemed writer Clay Dillow put it at the time, you can’t buy absolution—at least, not anymore—but $1.99 on this app will help you get there. 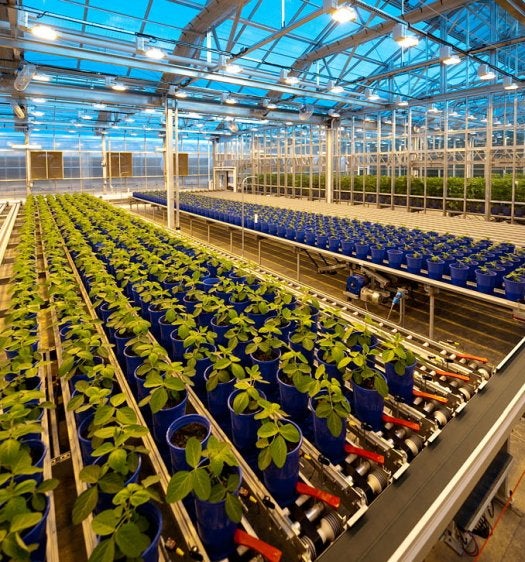 Under Benedict, a pontifical council came out in strong support of genetically modified crops as a way to feed a hungry world. A 2010 document from the Pontifical Academy of Sciences said it’s no more dangerous than evolution: “The possible evolutionary risks of genetic engineering events cannot be greater than the risks of the natural process of biological evolution or of the application of chemical mutagenesis.” Benedict himself didn’t say this; it was the finding of an advisory body. And others in church leadership circles have been less than excited about genetically modified food. But the statement, endorsed by all seven members of the Pontifical Academy, said there is nothing intrinsic about GM crops that would make them unsafe. The academy tackled the question of whether scientists are “playing God” by messing with nature, and the answer was no: “New human forms of intervention in the natural world should not be seen as contrary to the natural law that God has given to the Creation.” The image shows a Monsanto greenhouse growing genetically modified soybean plants. 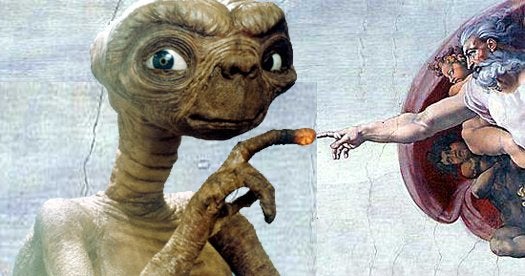 Along with praising genetically modified crops, the Pontifical Academy of Sciences hosted a conference on astrobiology. Really. In 2009, the Vatican played host to a five-day “study week” focusing on extrasolar planets and the possibility of extraterrestrial life. “The questions of life’s origins and of whether life exists elsewhere in the universe are very suitable and deserve serious consideration,” said the chief papal astronomer, Father Jose Gabriel Funes. Funes prompted the conference after he said the potential existence of alien life would not contradict the Bible. This raised a lot of theological questions, obviously, and one of them was the possibility of aliens that don’t need salvation–their ancestors didn’t commit original sin. The Vatican has come a long way since the Inquisition. Giordano Bruno, an Italian monk, was put to death in 1600 for claiming that other worlds exist.
Politics & Elections