Study Shows That Moles Can Smell In Stereo

They might be blind, but the common mole has a few tricks up its nostrils. 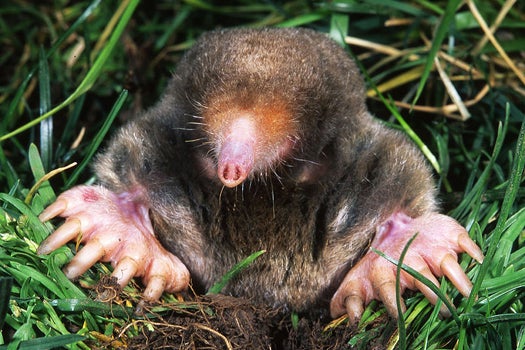 We see in stereo — our eyes, both on the same plane, see at the same time. This helps us see in 3-D. Whereas most fish have eyes on either side of their head and thus see a different image in each eye. A new study suggests moles, which live underground and are almost blind, can smell in stereo. Even though their nostrils are close together, they can differentiate between smell intensities from different directions to find food.

Eastern American moles don’t see or hear very well, even compared to the rest of molekind. Skin and fur hide their tiny eyes, and their ears are only tuned to low frequencies. But they locate their earthworm prey with surprising speed and accuracy.

According to Kenneth Catania, a professor of biological sciences at Vanderbilt University who studies the sensory systems of animals, this is because they can distinguish subtle differences in smells between their different nostrils.

Five seconds after it sniffed the air, moles were able to zero in on earthworm pieces placed randomly in a Plexiglass chamber. If one of its nostrils was blocked, the mole went in the direction of its clear nostril. When Catania inserted small plastic tubes to cross the mole’s nostrils so that smells on the right would come to the left nostril and vice versa, the mole got confused and wandered back and forth.

Even with their nostrils crossed or blocked, the moles were able to find the food eventually, so they probably are using more than just their stereoscopic sense of smell.

In a previous study, rats were trained to identify the direction a smell was coming from. Ants smell in stereo, sensing smells from two different directions at a time to help navigate. A 2010 study even suggested humans might be able to smell in stereo, if pushed to do it, although Catania himself remains skeptical.

Watch the mole hobble toward his snack below: