Overall, 40 percent of youth soccer players play through the pain, according to a recent study. 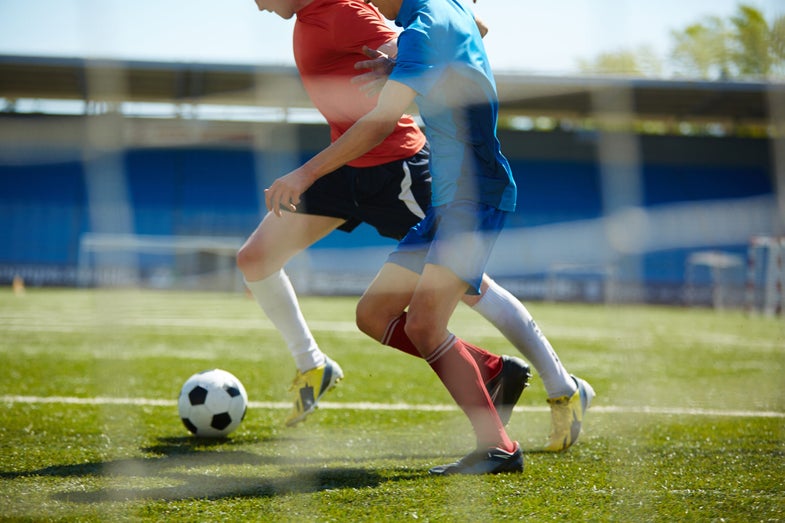 Shane Miller sees a lot of kids come through his office with concussions. Miller is a pediatric sports medicine specialist at Texas Scottish Rite Hospital for Children, and in the past few years, he started noticing something that worried him.

“We started to see a trend of athletes reporting to us that that they had continued to play in their particular sport after sustaining a concussion,” he says. “We wanted to go back and look to see if that’s just a few athletes.” Really, he says, that number should be zero.

After parsing through two years of data on concussion patients, Miller and his team found that girl soccer players, on average, were five times more likely to have returned to the field that same day as boys were, and that overall, 40 percent of the players—both boys and girls—continued playing on the day they were injured. The research, which will be presented on Saturday at the American Academy of Pediatrics annual meeting, looked at medical records for 87 soccer players, aged seven to 18, who had been diagnosed with a concussion at a pediatric sports medicine clinic in Texas. Of those who returned to play, all but one did so in the same game that they received the injury.

The work builds on a study Miller and his team completed last year, which grouped athletes from multiple sports together. That analysis also found that about 40 percent in total returned to play on the same day as a concussion. The current study is their first look at the data on athletes from one particular sport.

The research team does not have data on the circumstances surrounding the return to play for every player, Miller says. They don’t have the necessary information to clarify if these injured athletes were evaluated by a coach or a trainer before they went back into the game.

Every state has legislation on the books requiring that youth athletes suspected of having a concussion are removed from the game, and not allowed back until they’ve been cleared by a medical professional. Continuing to play a sport with a concussion can put athletes at higher risk for more injuries, and make recovery longer and more difficult. But according to Miller, in some cases, a player would have to tell his or her coach about their symptoms for them to know that there was a potential problem.

“A lot of these were athletes that did not report their symptoms at the time of the injury and kept [playing],” he says. “We’re not saying the coaches didn’t do a good job, we don’t know why they kept playing.”

Based on the data they have now, Miller says he can’t say why girls appeared so much more likely to keep playing than boys. “We’re actively investigating why. When they say they kept playing, we’ll ask them why.”

Sara Chrisman, who studies adolescent medicine at Seattle Children’s Hospital, has seen first hand the reluctance of young athletes to report a concussion to a coach. “A 15-year-old is not going to tell you they have a headache,” she says. “The whole culture is not designed in that way, especially for some of the sports that have a toughness element to them.”

Though Miller’s findings are interesting, she says, she’s also cautious about putting too much stock into the final results. “I take it with a grain of salt,” she says. That’s because the study looked back at information from past medical records and only included players who actually came into the clinic, rather than follow a group of athletes forward through a season. Chrisman says she was also surprised to see that the data showed high rates of same day return to play in girls, because girls are usually more likely to report injuries than boys.

Miller says that they plan to expand the study to a larger data set. The next step, he says, is to try and understand the reasons behind the trends they’re seeing. Based on what he’s seen so far, Miller thinks more actively educating athletes directly about the risks of continuing to play if they think they could have a concussion could help.

“We need to get to the athletes themselves,” he says, “And arm them with the knowledge of current concussion recommendations, and the reasons why they exist, so they can protect themselves and make a decision at the time of the injury.”