Herpes, having a blast. 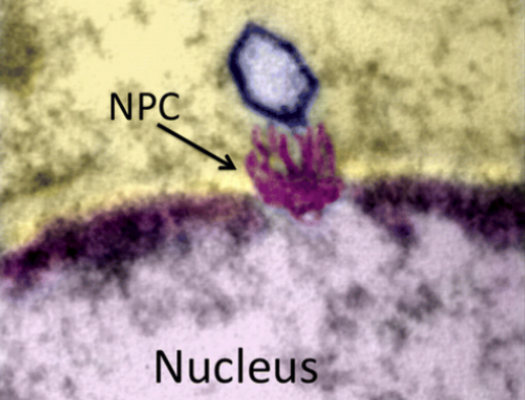 Scientists have long theorized that herpes viruses are so stuffed with genetic material that infecting a host cell is as easy as popping a balloon. Or exploding a powder keg. The internal pressure within the virus is so great, it explodes its genetic material straight out of its virus shell and right into its desired host.

Pressure-driven infection has been observed previously in bacteriophages, viruses that infect bacteria cells, but scientists from Carnegie Mellon University now have the first experimental evidence that a eukaryotic virus, a virus that can infect cells with a nucleus, can do it. They’ve also been able to measure the pressure.

The herpes simplex virus type 1 (HSV-1)–that’s the type of herpes that normally causes herpes infections around the mouth, as opposed to HSV-2, the usual cause of genital herpes–contains a double strand of DNA 400 times longer than the radius of its capsid, the protein shell that holds it. As a result, the DNA bends on itself to fit inside, creating a huge amount of pressure on the viral shell–tens of atmospheres, around eight times the internal pressure of a car tire. The HSV-1 enters the host cell and sneaks its way over to the nucleus, where a hole in the nuclear membrane acts like a key, opening the door for the virus to shoot its high-pressure genome load into the nucleus.

This type of pressurized infection occurs in all eight types of herpes viruses that infect humans, including Epstein-Barr, which causes mono, and Varicella zoster, which causes chickenpox. With better knowledge of how the viral infection unfolds, the researchers hope better antiviral medications can be developed.

The discovery is detailed in a paper in the Journal of the American Chemical Society, delightfully entitled “Herpes Virus Genome, The Pressure Is On.”