This Giant Stellar Bubble Looks Like A Dog’s Head 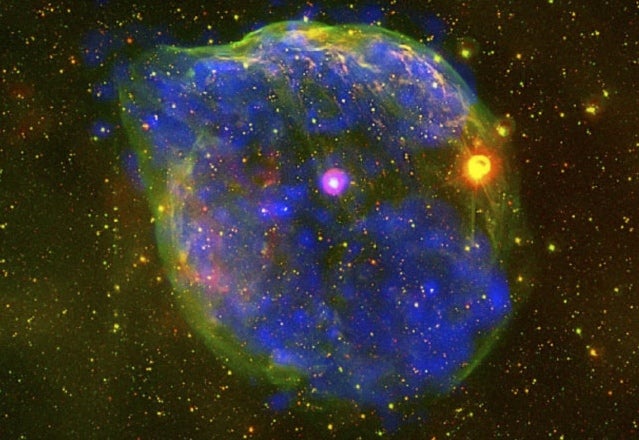 Some 5,000 light years away, hovering in the constellation Canis Major, this massive 60-light-years-across bubble is lurking. Known as a Wolf-Rayet bubble (and thought by some to resembe a wolf- or dog-like head), it’s a type of cosmic structure created by huge stars that generate equally colossal stellar winds. When imaged in X-ray, it gives us the shifting blues, greens, yellows, and reds seen above.

This Wolf-Rayet is known as S 308, and it was generated by a star known as HD 50896. It is one of only two known Wolf-Rayet bubbles that emits X-rays. That allowed an international team of scientists to capture it using the European Photon Imaging Camera aboard the European Space Agency’s X-ray imaging XMM-Newton observatory. The green halo marks the end of the shock wave that the star is blowing out into space, while the blues and reds that round out the bubble are the result of powerful solar winds colliding with surrounding material in the region.

Like any good bubble, this one will eventually burst. S 308 will disperse its stellar material into the surrounding space, while the star will die a supernova death.