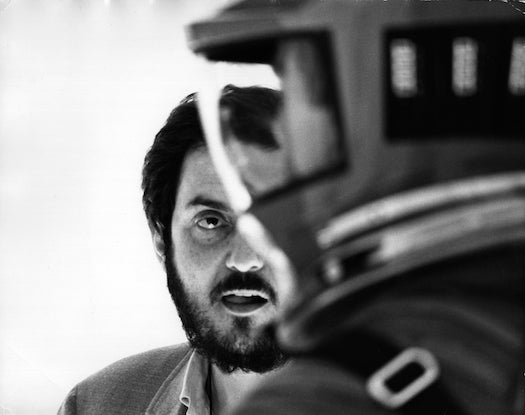 The cosmic doors of perception are sprung wide open during the famous Start Gate sequence in "2001," where Bowman is shown hurtling through a phantasmagoria of space, thanks to a new "slit-scan" technique pioneered by Kubrick. The film's special-effects wizard Douglas Trumbull developed the method by placing a large piece of glass with a 4-foot vertical slit in front of various backlit pieces of moving op-art and graphical patterns. The camera, positioned on a length of track in a dark room, could then film the shifting shapes through the slit, making possible an extended exposure that went from 15 feet to one-inch from the slit in the span of a minute. The resulting psychedelics, not surprisingly, proved popular with the decade's acid droppers. Image courtesy of LACMA
SHARE

As you wander through the Los Angeles County Museum of Art’s sprawling new exhibit on Stanley Kubrick, it’s hard not to marvel at how utterly distinct each of the legendary American film director’s imagined worlds were: Lolita, Dr. Strangelove, A Clockwork Orange, <2001: A Space Odyssey, The Shining, Full Metal Jacket, Eyes Wide Shut, each a meticulously crafted cinematic cosmos unto itself. As Kubrick über-fan Steven Spielberg once noted, Kubrick was a chameleon who never made the made the same movie twice. What did stay constant, however, was his pioneering embrace of cutting-edge technologies, from Steadicams to NASA satellite lenses and more.

“In making a film, I start with an emotion, a feeling, a sense of a subject or a situation,” Kubrick is quoted in the exhibit, his first U.S. retrospective. “The theme and technique come as a result of the material passing, as it were, through myself and coming out of the projection lens.”

What a lens it was: Kubrick gave life to his haunting scenes and uncanny visions by constantly seeking out new tools that would explode earlier limits of what could be projected onscreen. Kubrick inspired new technological leaps in film, and new technological leaps inspired Kubrick. He was a relentless innovator and tinkerer, a point the LACMA exhibit makes by stuffing a 20-foot long case of some of director’s beloved experimental lenses. His knowledge of still photography (he began his career shooting photos for Look magazine in his teens) traveled with him as he segued into film, and he found he could film exciting new perspectives by taking powerful still photography lenses and having them jury rigged onto traditional film cameras.

“Kubrick always reworked his material and mise-en-scène so that the technology became essential to the telling of the story and this defines his relationship to innovation,” says Patti Podesta, a Hollywood production designer who’s worked on films such as Memento and Bobby and designed the LACMA installation. “He sought out new technologies but also had a kind of technological patience, the discipline to wait until innovation caught up to his imagination.” Check out the gallery above for a look at some of Kubrick’s signal advances. 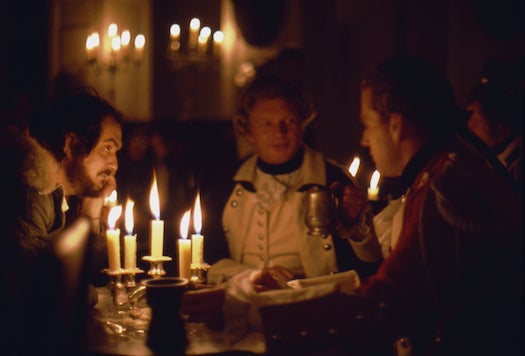 To film the past, tap the future

One of the lovely ironies of Kubrick’s “Barry Lyndon” is that to accurately capture the look and feel of 18th-century Europe, the director turned to futuristic technology created for NASA. To film scenes illuminated only by candlelight, Kubrick relied on the German company Zeiss, which had recently built a special ultra-fast 50mm lens for NASA’s use in satellite photography. Upon discovering the firm still had six of the 25 lenses made, Kubrick purchased one and, with creative engineering help from Ed Di Guilio of Cinema Products Inc., attached it to his faithful 35mm Mitchell Blimped Noiseless Camera. Since the f/0.7 Zeiss lens was twice as fast as any other lens, Kubrick could now film by candlelight alone. Since the lens had almost zero depth of field, the beautifully atmospheric candlelit scenes required precise staging to maintain focus. 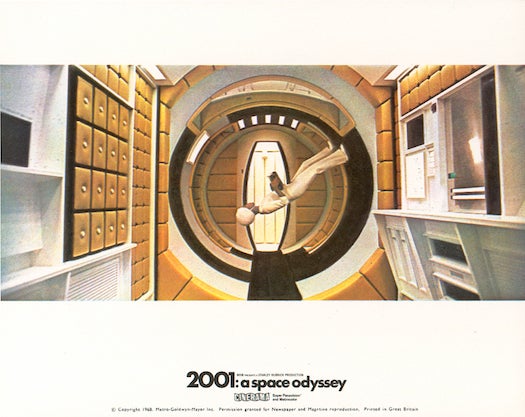 Walking up the walls

Kubrick’s landmark “2001: A Space Odyssey” (1968) covers an awesome evolutionary sweep as it ranges from the “Dawn of Man” on the African plains to a 21st century computer-run spaceship — “Hello, HAL” — ferrying astronauts to the moon and later to Jupiter as they seek to unravel the mysteries of human existence. During pre-production Kubrick collected vast amounts of research on what life in space would be like in the near future, consulting the aerospace industry, university researchers and R&D; labs. The idea of a rapidly spinning centrifuge that could harness centripetal force to maintain earthly levels of gravity was popular in space talk at the time, so Kubrick decided the film’s Discovery spaceship should prominently feature a copy. He hired Vickers Engineering Group to create a $300,000 imitation centrifuge (top rotational speed: 3 mph). The Ferris wheel-like set allowed Kubrick to film famous scenes that appear to show an astronaut jogging in a vertical circle or walking up the round sides of the ship. “Being a production designer, I’ve always felt that the centrifuge was so far ahead of its time and still is, and I admire the intense research Kubrick did to commit to build it, and simultaneously the camera and playback systems that had to be adapted in order to shoot it,” Podesta says. “I still watch those images on the centrifuge in awe.” 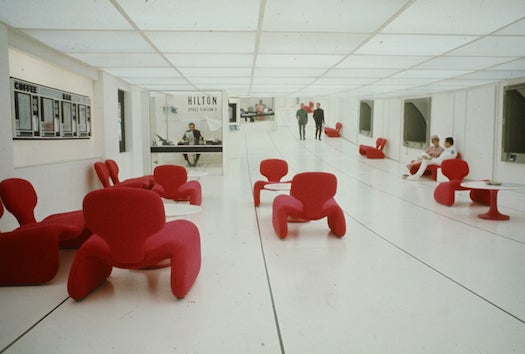 To create a simulacrum of the future, Kubrick needed to invent the objects of the future. To ease the burden of imagining that world out of whole cloth, Kubrick outsourced some of the work by adopting an early form of product placement: Hamilton would design the wrist watches, Vogue was charged with fabricating the cast’s clothing, hairstyle and makeup, and IBM worked on the computer systems. Some 40 companies placed their products in the film, and the companies in turn touted the film’s cachet in their own advertisements. By leveraging the R&D; departments of large corporations, Kubrick was able to harness some of the latest technology available to realize his vision.

A slit into the infinite

The cosmic doors of perception are sprung wide open during the famous Start Gate sequence in “2001,” where Bowman is shown hurtling through a phantasmagoria of space, thanks to a new “slit-scan” technique pioneered by Kubrick. The film’s special-effects wizard Douglas Trumbull developed the method by placing a large piece of glass with a 4-foot vertical slit in front of various backlit pieces of moving op-art and graphical patterns. The camera, positioned on a length of track in a dark room, could then film the shifting shapes through the slit, making possible an extended exposure that went from 15 feet to one-inch from the slit in the span of a minute. The resulting psychedelics, not surprisingly, proved popular with the decade’s acid droppers. 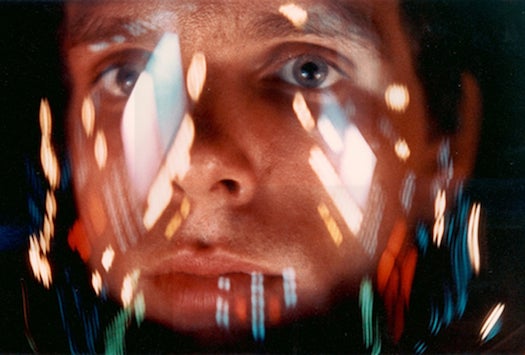 Kubrick’s “2001” pioneered the early use of what’s called motion control photography. The model spaceships used in the film were moved along precise tracks that allowed the crew to precisely replicate their course over and over again, so that multiple elements of a single film sequence could later be combined into the composite image the viewer sees. George Lucas would subsequently push the technique to new heights when he incorporated the use of newly powerful computers into his motion-control sequences in “Star Wars.” 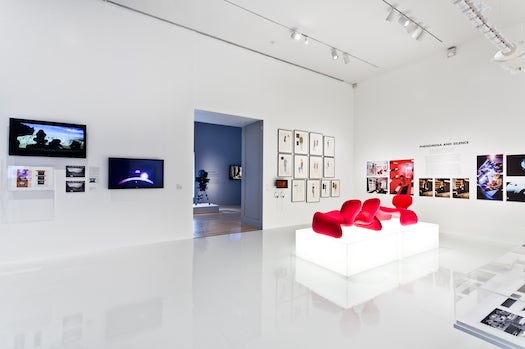 “2001” was a hotbed of cinematic creativity, with 205 separate special effects shots. Aside from slit-screen, one of the film’s other biggest innovations was its use of a technique called front-projection during the opening “The Dawn of Man” sequence. Shooting the footage in Africa would’ve been costly and time-consuming, so instead Kubrick opted for a soundstage shoot with a new front-projection technology that gave a crisper image than traditional rear-projection methods, allowing him to use a 70mm format. A large projector projected an image of the African plains, which was then reflected via a semitransparent one-way mirror onto a screen made of millions of glass beads. Since the beads only reflected light from one direction (same 3M technology used in highway signs), the projected images didn’t show up on the actors and objects but only as background. The camera, then, filmed the composite image, with the projected scenery appearing realistically behind the actors. Location shoot averted. 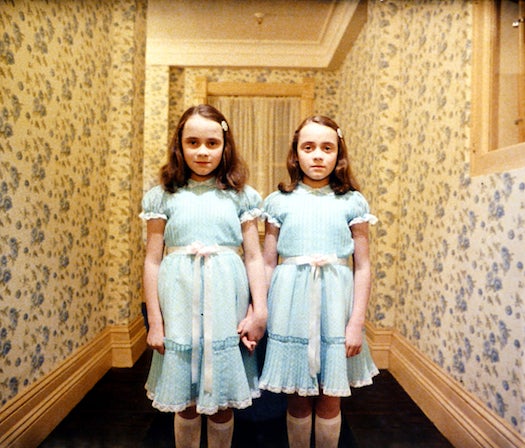 No, Stanley Kubrick didn’t invent the Steadicam but he was an enthusiastic early adopter. Kubrick used the new camera to great effect in his 1980 horror classic “The Shining.” Based on a Stephen King novel, the film features Jack Nicholson as a besieged writer serving as off-season caretaker of a remote snowbound hotel full of sinister spirits when he slides into demonic madness and attempts to kill his wife and telepathic son. Kubrick went so far as to design the sets in the Overlook Hotel to take advantage of the camera’s liberating potential, and the director make heavy use of the then-experimental camera during the famous hedge-maze scene. While conventional handheld cameras were fine for capturing a kind of jogging-over-potholes effect, the Steadicam’s shock-absorbing design allowed directors a newfound mobility and long, continuous takes without losing a smooth, steady focus. In the wake of “The Shining,” the camera quickly became standard equipment on movie sets. 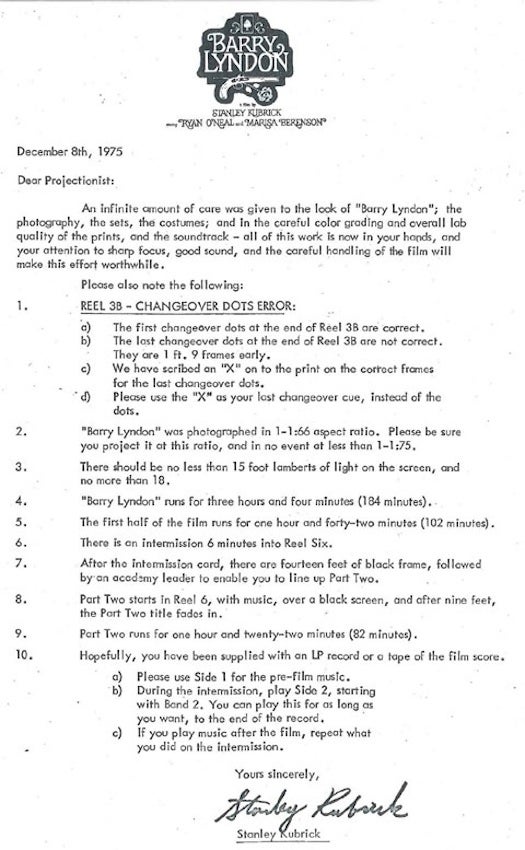 The director is in the details

Kubrick’s painstaking attention to technical details didn’t end when production ended. The director sent this letter to theater projectionists advising them how to properly handle his 1975 film “Barry Lyndon.” As Podesta puts it, “He was an expert in every aspect of filmmaking and one of his favorite sayings was, ‘You either care or you don’t.'”