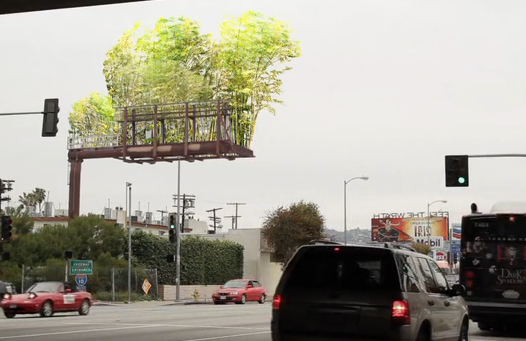 In areas that allow unlimited billboard construction, the side of the road can look like a peeling, rusty forest. Signs that aren’t hawking cellphone companies, fast food places or adult stores are adorned with horribly sketched toothy whales shouting YOUR AD HERE. But there is a better billboard future! Let’s put plants on them instead, creating mini hanging gardens that can purify air and give us a break from a constant barrage of words and pictures.

Last year L.A.-based artist Stephen Glassman, who has apparently been making bamboo art installations for two decades, made a small-scale art project called Urban Air that involved a miniature billboard-bamboo setup. After it got some attention, leading billboard-maker Summit Media agreed to donate billboards in busy areas of Los Angeles for the first prototype.

It works by removing the advertisement-ready facade and retrofitting a billboard’s metal husk to contain planters, live bamboo and a watering system. The installation includes environmental sensors and is connected to wifi. A new Kickstarter project is trying to raise $100,000 to hire all the electrical and structural engineers needed to build it. The goal is a bamboo billboard kit that could be installed anywhere.

Imagine if, instead of advertisements screaming about taxes and abortion and Obamacare, we were bathed in soothing placards of calm. Americans are exposed to 5,000 advertisements a day, as Treehugger points out–so this sounds like a welcome reprieve. You can learn more about the project here.