Images created through the program, DreamUp, will be auto-tagged as AI art. But artists can opt out of including their work in the training set for future developments. 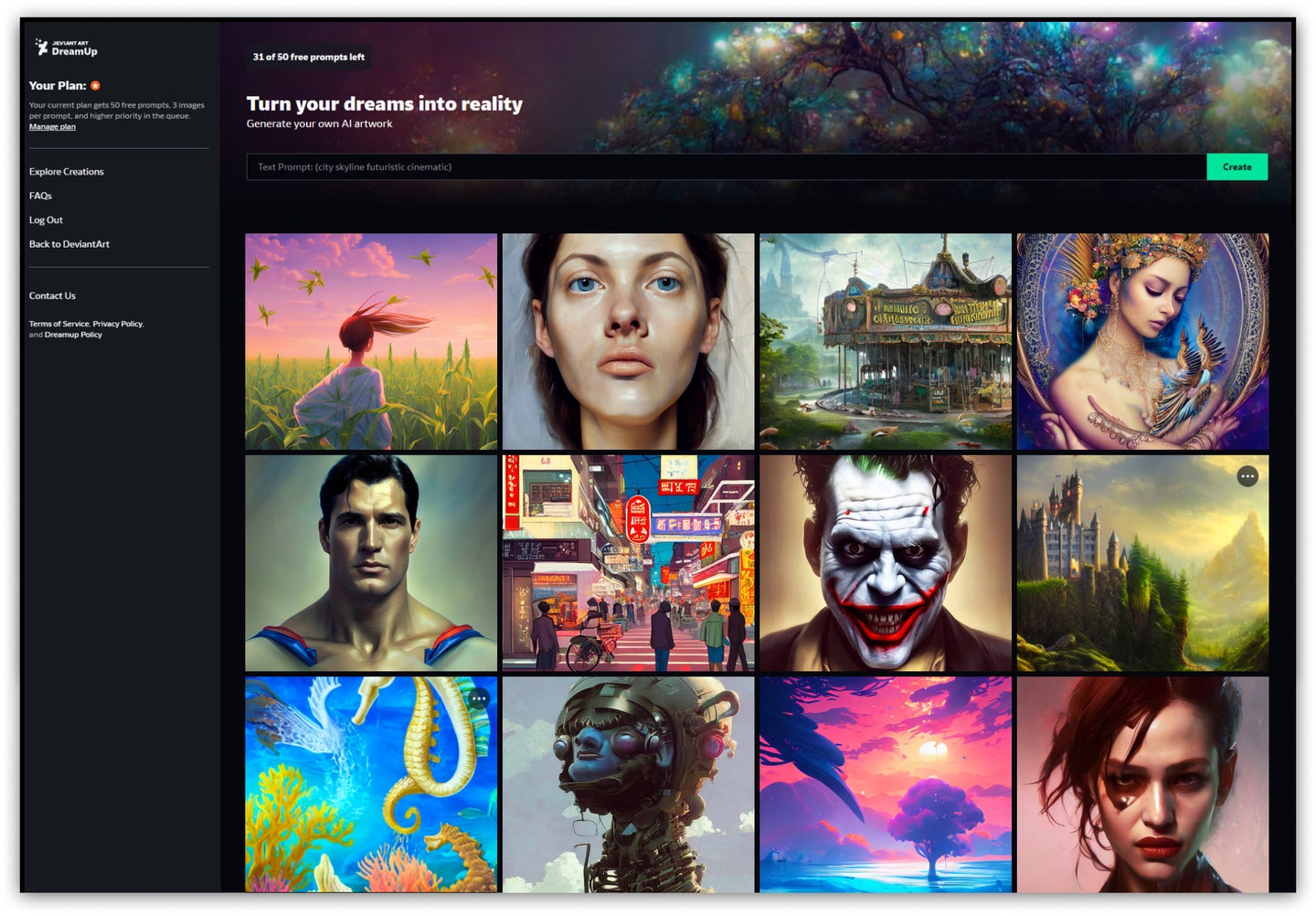 This post has been updated. It was originally published on November 12, 2022.

By now, you’ve probably seen the vibrant swirls of mythic castles and fantasy lands generated by AI art tools like DALL-E. You might have even been fooled by images that looked like they were painted from the brush of Matisse or van Gogh but were, in fact, created by a computer that was fed a few samples of the artist’s original work. And if you were critical, you may have wondered how the styles of these or other artists can be taken and mimicked without some type of repercussion.

AI art has taken the world by storm, winning awards and leaving some industry observers worried that artists’ styles will be co-opted and profited off of without their consent.

“AI technology is progressing so fast that oftentimes they progress without the necessary checks and balances,” says Liat Karpel Gurwicz, CMO of online art-sharing platform DeviantArt. “And they leave creators vulnerable to being hurt through what’s developing and the usage of these technologies.”

DeviantArt, which has been an online community for artists since 2000, hopes to begin tackling some of the ownership issues at the intersection of art and AI with its new AI image generator, DreamUp. All DeviantArt users have access to DreamUp through the DreamUp website, although different tiers of users have a greater number of free prompts. Before widespread AI-generated art, DeviantArt hosted hundreds of millions of pieces of art uploaded by users, along with paid tiers of content for patrons, allowing artists to make money off the content they upload. But in the past four months alone, DeviantArt has seen a 1000 percent increase in AI-generated art uploaded to the site. And that’s just what’s been tagged as AI-generated. “There was most likely much more [AI-generated] art uploaded than that,” says Moti Levy, CEO of DeviantArt.

[Related: Shutterstock and OpenAI have come up with one possible solution to the ownership problem in AI art]

DreamUp won’t actually look drastically different from other AI art generators at first. That’s because it relies on Stable Diffusion, a third-party AI system that takes text and turns it into images. Stable Diffusion is open-source, meaning companies can make, and have made, use of the software to create their own image generators.

The difference comes in when users go to upload their AI-generated images. When a DreamUp image is uploaded to DeviantArt from the program, it is automatically tagged with #AIart, a tag that cannot be removed by the user. The image is also tagged with any artists mentioned in the prompt. So, for example, if the text prompt was: “An oil painting in the style of Matisse of an alligator dancing while it reads a book,” the image would automatically receive a tag that references Matisse. In addition, the page will be watermarked with a DreamUp logo, Gurwicz says, to give as much transparency as possible about where the image was created.

But like other popular AI-image generators, Stable Diffusion was trained on images from across the internet without the consent of image owners. Concern over this issue has led to the creation of tools like Have I Been Trained, which can help inform people about whether their content or image has been used to train AI. For artists, this may be especially problematic. AI programs can easily and quickly mock up an image in someone’s art style that they’ve worked tirelessly to develop and curate. To address this, DeviantArt is now allowing artists to opt out of letting future versions of DreamUp use their art in the training process. By choosing this option, a metatag is linked to the artist’s content, and DreamUp will automatically deny a user’s requests to create work in the style of that artist.

Still, the current version of Stable Diffusion wasn’t trained on this exclusion, meaning DeviantArt users’ previous content may have trained this iteration of the program, but their style cannot be used as a descriptor going forward, if they opt out. Creating a new AI art generator from scratch “would take years for us to develop and leave us in a situation where we’re unable to do anything to make the current situation better right for the community,” Gurwicz says. “Considering the bad situation that exists. It’s kind of the best solution we can bring.”

Even with protections in place on DeviantArt, debates related to art ownership on these types of platforms across the internet still remain rampant, and no clear answer has emerged yet. DeviantArt is not allowing monetization of DreamUp art for now and intends to make its new AI transparency directives open to other companies while legal regulations in the space remain sparse.

“At the end of the day, we cannot control the entire internet, we can only control what happens on DeviantArt,” Gurwicz says. “We can set an example for other platforms, and we can try and introduce standards that will be adopted across the web, and we can try to cultivate a good culture and etiquette amongst our community in terms of how creators should treat each other. This is what we’re focused on.”

Update on November 14: Following DeviantArt’s release of DreamUp on Friday, users have expressed concern about the platform’s default opt-in system, as well as their use of Stable Diffusion, which was trained using images from across the internet, including places like DeviantArt, without artist consent. Following the critiques, DeviantArt changed their noAI initiative to automatically opt out users’ content from being included in third-party data sets on Friday. Still, some users remain frustrated about the fact that DreamUp used Stable Diffusion’s internet-scraping model in the first place.