Why Are Airplane Seats So Miserable, and What Can Be Done About It? 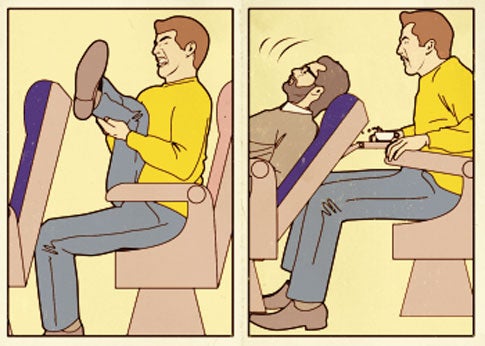 I am not normal. Not even close, I am told. Apparently, my height, which at 6’4″ has always seemed to me to be just this side of freakish, puts me in the 99th percentile of American adults. That is, statistically too tall to fly comfortably in coach.

Or at least that’s the explanation I was given by Klaus Brauer, Boeing’s immaculately articulate guru of airline interior design, whose conflicted job title is Director, Passenger Satisfaction & Revenue. “There are many good things about being 6’4”, Brauer told me over speakerphone, from what I imagined to be a cushy office chair in Seattle. “Flying economy class is not one of them.” 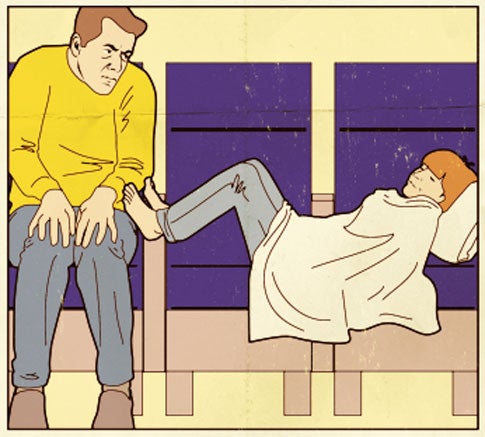 Pithy. But my towering frame doesn’t explain why most people I know — who reside in that bulge of the anthropometric bell curve known as average — find seating in coach class to be nearly as miserable as I do. Is it such a monumental challenge to make a comfy airplane seat? The typical cushion is so hard that I no longer travel in my favorite jeans because the compressed pocket stitching leaves me with painful welts. As for legroom, flying on certain planes makes me wish I could gate-check my femurs. Would comfort somehow compromise my safety? (I might better tolerate the leg edema knowing that my constricted posture was for a greater cause — like surviving a crash.) Or does it boil down to cold, hard economics: The leaner and meaner the seat, the easier it is to cram more customers onto a plane.

While we’ve watched from behind the curtain as first class got flat-lying beds, coach-class seating has barely evolved in 30 years. Boeing now makes entire planes out of carbon fiber, yet advances in engineering don’t seem to have trickled down to where it counts — beneath my behind. Are they even trying?
⁃
Armed with such urgent questions, I pressed Brauer. To be fair, our discomfort is not exactly his fault. Boeing, like Airbus and other manufacturers, doesn’t even make the seats that go on its aircraft; airlines buy them from specialty suppliers. But Brauer, a former Air Force officer and mechanical engineer, still has a lot to do with our in-flight comfort. He’s been researching it almost since he started at Boeing in 1979 and consults with airlines on how seat configurations balance comfort against the bottom line. His calculations largely led to the 777’s shift to three rows of three, from the “2-5-2” configuration, which allows everyone to have a free seat next to them when the plane is 67 percent full (versus 44 percent). 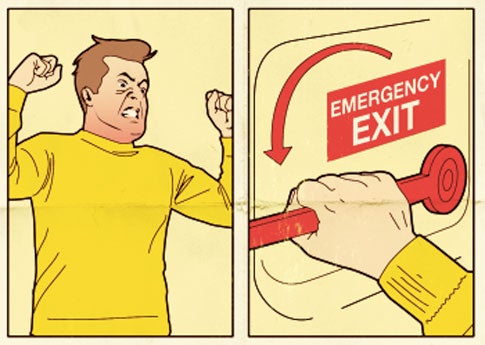 Optimizing coach comfort, he says, relies heavily on two probabilities: one, that not everyone in a row will be the same size, and two, that not every seat will be full. “In business class, one of the things you pay for is the near-zero probability that the passenger next to you will extend into your space,” Brauer says. “And the free drink.”

His antidote to my pain: “Fly business class.” I can’t afford his advice, nor can I accept it when a few clicks on the Internet turn up a far more satisfying answer: tantalizing images of an economy-class seat called the Cozy Suite. The answer to my dreams is a clever arrangement of staggered seats designed by Thompson Solutions of Northern Ireland that leaves each passenger with a padded side panel to cuddle up against. Ahhh. The seat cushion slides forward and down while the back remains fixed, so that reclining won’t put you in the nostril contrail of the guy behind you.

It seemed too good to be true — and it probably is. As I later discovered, it will be at least a year and a half before the seats show up, if at all, in the economy cabins of long-haul Delta planes. Thompson recently conducted focus groups for the airline, but Delta won’t confirm that it’s placed an order. The Federal Aviation Administration, which oversees seat safety, hasn’t even heard about the Cozy Suite yet.

On the upside, Thompson’s work suggests that it’s not impossible to build a better airplane seat. So why don’t we have them? First, it helps to understand the design objectives in play. Federal law and physics require that seats be safe and lightweight. Comfort? That’s a bonus. The prevailing approach isn’t to make seats comfortable but to eliminate _dis_comfort. The difference is more than semantic. Designing a seat to be not uncomfortable for the largest number of people reduces the ergonomic contours to the lowest common denominator. As a result, no-brainers like an adjustable lumbar support turn out to be a genuine pain for some because of the wide range not just in height but in lower-back curvature.

That said, airlines have had the chance to upgrade cattle class in the ongoing changeover to sturdier structures mandated by the FAA 20 years ago, but most of them seem to have blown the redesign opportunity. A 1988 rule increased the strength requirements of airline seats from nine times the force of gravity to 16, and instituted crash testing like the automotive industry uses to guard against debilitating injuries. It’s a bend-don’t-break directive meant to protect the head, legs and spine so that if you survive a crash (and 95 percent do, according to the National Transportation Safety Board), you’ll be able to escape. Attached with swivels, the “16g” seats won’t snap off if the floor moves, or crumple and block a row. Early versions of the seats tended to be overbuilt and bulky, often eating into shin and knee room with reinforced spars, but that isn’t entirely to blame for our discomfort either. “There is no catch-22 to this,” says Rick DeWeese, who heads one of the FAA’s two crash-test centers, in Oklahoma City. “There’s no reason a safe seat can’t be a comfortable one.” 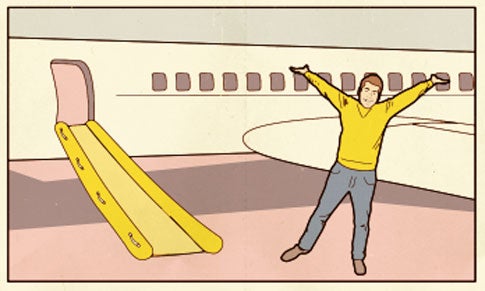 Find Your Own (Air) Space

Glenn Johnson, the design director at B/E Aerospace, which makes seats for Southwest Airlines, Continental Airlines and British Airways, among others, argues that his company’s chairs are comfortable. Lift the cushion on a B/E seat and you see a stretched fabric diaphragm, not unlike an Aeron chair, a comfort feature B/E patented a decade ago. It has also patented armrests with a forward hinge point, creating knee room for the passenger behind. “If you put an economy-class seat in a nice place and compared it to an Aeron chair, I would argue that the Aeron chair is no more comfortable,” Johnson says. The issue, he contends, is one of environment, thus the reason why we don’t mind sitting on hard wooden stools in a bar. Like Brauer, Johnson insists that it’s not the seats; it’s how the airlines pack them in.

The calculus of comfort is straightforward: Measure from one mounting bolt to the same point at the row behind — a distance known as seat pitch — and subtract the thickness of the back cushion to determine leg room. Most carriers fix their seats somewhere between a 31- and 34-inch pitch. Assuming a seat thickness of two inches, even the tightest spacing actually allows for 99th-percentile males to squeeze in. But once they’re in there, they can’t move. “Wiggle room,” Brauer says, “contributes to comfort in a very real way, but not in a way that is easily quantified.” For me to be able to cross my legs, I’d need 26.25 inches for my femurs, about five inches for my calves, plus two inches for the seat: a 33.25-inch pitch. That rarely happens.

JetBlue is one of the few carriers that builds in wiggle room. Its three-by-three Airbus A320s have a standard 34-inch pitch, and six rows with a 38-inch pitch for a fee ($10 to $30, depending on flight length). It’s not that the bigger, multi-class airlines haven’t tried. In 2000, American Airlines yanked at least one row out of its 700 aircraft and advertised “More room throughout coach,” hoping to fill up its planes. The $70-million reconfiguration added three inches of legroom. “It was a grand experiment, but it didn’t really work,” admits company spokesman Tim Smith. “If you do a survey, people will say one thing — ‘Oh yeah, I’d pay $10 more for more legroom’ — but when it comes time to vote with their wallet, they’ll go across the street.” In 2003, American reversed course, reducing fares and legroom.

Perhaps it’s the marketplace that’s flawed. Everyone who flies steerage pays for the same amount of personal space, regardless of size, and given the ease of comparison shopping, the lowball offer always wins. But if the airlines are so pressed for profits, I’ve got a better idea. Charge for weight instead, since that’s really what burns fuel. Pull a row, add room to shift around, and then fix a total weight limit for each economy ticket — let’s say 225 pounds for you and all your gear. You go over that, you pay more, just like with luggage. This should more than make up for revenue lost to that missing row.

What? It would be embarrassing to hop on a scale at check-in? Any more so than I find taking off my shoes and belt and trying to keep the line from seeing my spandex underwear while some guy wands me? It seems to me that the fairest option is paying for your own freight.

How else to solve my dilemma? It’s no surprise that 99 percent of the population isn’t willing to pay extra for my comfort, because they don’t need the extra legroom. So, going by the numbers, it turns out the person I have to blame for my battered knees is you, shorty.