What The U.S. Government Asks Google To Censor [Infographic]

Not hard to see: more takedown requests are coming every year. 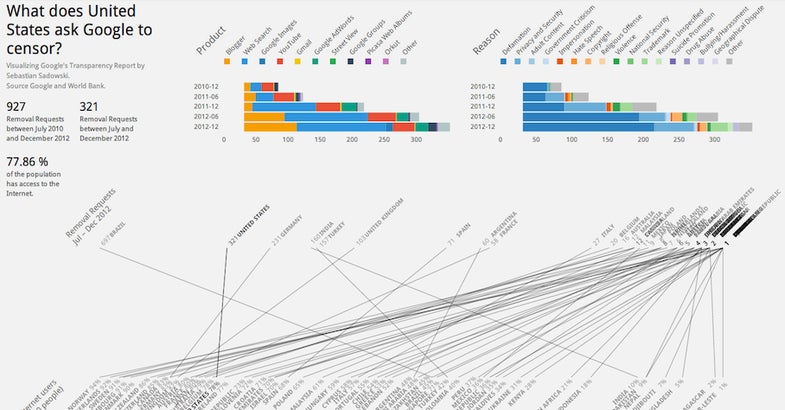 If the government wants Google to remove content, officials can file a removal request with the tech giant. Google, for transparency, releases data on those takedown requests, there for any interested party to peruse.

Designer Sebastian Sadowski took some of that info and placed it in an interactive format, letting people see, at a glance, what their government would rather they didn’t see. Here’s the breakdown in the United States, where the majority of takedown requests are apparently through Google’s search operation. The infographic also shows the reasons those requests were filed. In the U.S., “defamation” (based on court orders) handily tops other reasons, like “impersonation” and “trademark.”

Keep in mind, you need to do some interpretation to read this right: the data is broken down by six-month periods. “2012-06” toward the top, indicates the data is from the first six months of the year 2012. Once you know that, it’s not hard to see an upward trend in the number of requests.

Removal Requests In The U.S.

Unfortunately, there’s no data here on how many of the requests Google complied with, which might make the infographic look very different. You can get some data on that from Google’s report.

Still, it’s worth checking out the full infographic to see how local laws affect these stats. Who knew Belgium had so many issues with YouTube?