A tiny channel of canals directs water away from where it shouldn't be. 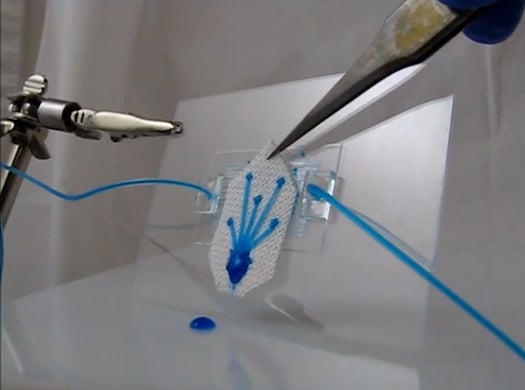 We’ve seem some neat ideas for water-repellant materials that suggest sweat stains will one day be as dead as dial-up. Here’s one more: Researchers at the University of California, Davis, are developing a fabric that acts like human skin, channeling and releasing excess moisture.

Beads of sweat form and fall when there’s excess water on the body, and the idea behind this project is similar: hydrophilic threads are stitched into a fabric made from a hydrophobic material. Put water in touch with the fabric, and the water will be pushed toward the hydrophilic material, then drawn through gaps and expelled on the other side. (Sweat itself actually doesn’t smell; that smell’s released by bacteria on skin breaking down proteins in the sweat. So hopefully a sweater made out of this stuff wouldn’t be gross for everyone nearby.) All the other parts, meanwhile, stay “completely dry and breathable.”

Going to the gym in the future is going to be the best.