You Can Eat Off The Floor (Of The International Space Station) 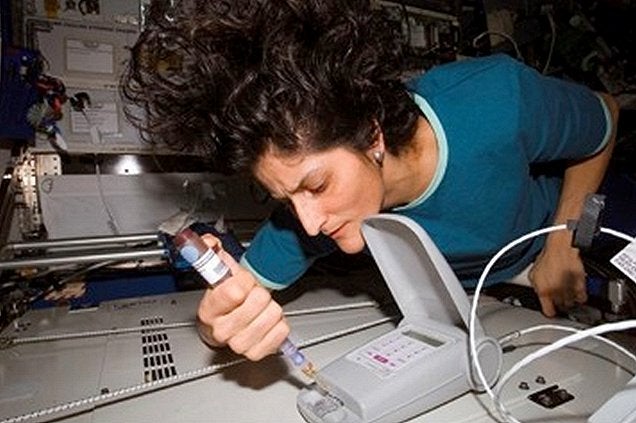 A new paper, enticingly titled “Rapid culture-independent microbial analysis aboard the international space station (ISS) stage two: quantifying three microbial biomarkers,” seeks to answer the most pressing question in space: can you eat off the floor?

The ISS team used what’s called a Lab-on-a-Chip Application Development–Portable Test System (LOCAD-PTS). The LOCAD-PTS is a handheld tester for various kinds of bacteria and fungi, used specifically for the ISS. There are a few ways to use it; you can either use a sheet of agar (sort of like extremely firm jello) and press it to a surface for awhile, then allow to incubate for a few days, or you can simply use a dry swab on the surface and then mix with ultra-clean water provided especially for this purpose.

LOCAD-PTS tests done with that second option, which is what the ISS folks did here, are super quick: results pop up on the screen after only about 15 minutes. A description of the test, from NASA:

So, how did the ISS fare? Really well! The paper notes that “most surfaces used by the station crew are relatively free of microbial molecules,” though the sites of heavy contact (like handles and the exercise station) have a bit more bacteria than other parts. But even those are fairly clean; NASA notes that they’re “very satisfied with the results.”

So can you eat astronaut ice cream off the floor of the ISS? Yep! Maybe don’t eat it off the seat of the stationary bike, though. That might make you puke.